US embargo on Cuba has failed

if you want to get really technical about it, russia was never completely communist, but it was communist enough to show the world how bad of an idea it is.

today, most of the fundamentals of communism still exist. the public still doesn’t have free access to resources and the government still HEAVILY subsidizes everything the public uses either directly or through the oligarchies putin created. they have free elections, but exactly how free? i realize the people do really love putin, but you really think he won the last election by taking 77% of the vote?

I don’t get all the people pro Embargo, especially not the Cuban expats hating the regime. While it has made the Cuban communist regime weak to influence the region, and obviously that matters, the Castros have been in power non stop for decades and even now it’s still communist led! Only the people have suffered.

I would take Hessians thoughts on this vs anyone that has never lived in the area while doing business there. Stop being afraid of the boogeyman in the corner that the govt/media has warned us about for the past 60 years.

Problem is America would have invaded America or at least promoted some regime change just from your 2016 and 2020 elections.

Many sectors are heavily subsidized by the US. Many through billionaires who control the resources, media and resources. What are the odds Americans get lied to like the Russians do?

America doesn’t believe Biden got the votes he did. So how free of a vote is it really?
There is proof or not of a injustice in the voting? Seems America is the only country that sends people to supervise free elections in foreign countries but nobody is allowed to monitor yours.

You already beat CCCP, then surrounded them and broke accords not to do so or invite countries into NATO. What is the use of a cold-war if you never realize you won and the old enemy doesn’t want any part of imaginary cold wars?

Russia as it reforms itself has taken parts of different politics.

I found this quote this morning and found it very familiar in how it plays out in overthrowing foreign Governments. Problem is it is now being used on Americans.

"The irony is that many Republicans are actually behaving just like the Serb leadership in the crumbling Yugoslavia: refusing to believe there’s a war on, appealing to fairness and rules that have long been cast aside, and advocating a tactic of retreating and regrouping in their strongholds. The principal lesson of Yugoslavia – that these tactics don’t work and lead to disaster and defeat – eludes them, because they either don’t know anything about the conflict, or know only the distorted mainstream narrative.

With that narrative now being weaponized against them, perhaps they ought to question it more – and quickly, while they still can." 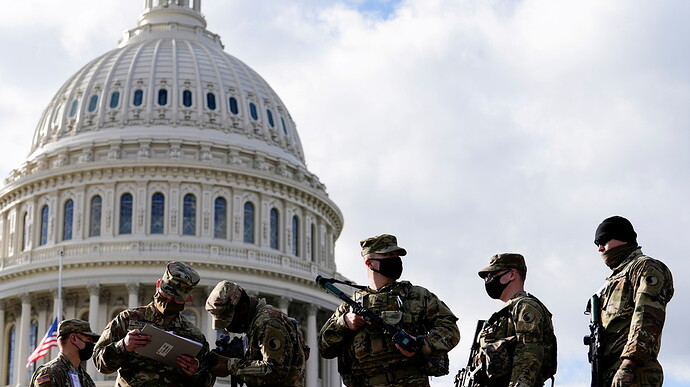 United States of… Yugoslavia? Cartoon hints at next chapter of American civil...

A recent editorial cartoon comparing the US to the former Yugoslavia isn’t a warning to avoid the path to balkanization and sectarian warfare, so much as a hint in which direction the already ongoing civil war might be escalating.

America would have invaded America

Yes, do you not think that if there was this much struggle around a election and proof or no proof of fraud that the US wouldn’t go and straighten it out? World Police 101 for empires, Making sure the correct person wins regardless of the votes.

If they wanted the Dems to win they would have smeared the shit out of Republicans. Sanctions, outlawing them as a illegitimates. Not allowing them to travel, freezing bank accounts. Persecuting those who raised their voices. Banning anyone who is not on the proper side from social media.

If they wanted the Republicans to win they would have spoken of the brave souls turned away by force and now prosecuted for wanting a better life. Funding, training, bank accounts seized of Dems and on and on. Small area taken over so the brave freedom fighters can be safe like in Syria.

It is actually happening in many ways to the Republicans already.

i see…wasn’t sure if that was a typo or not.