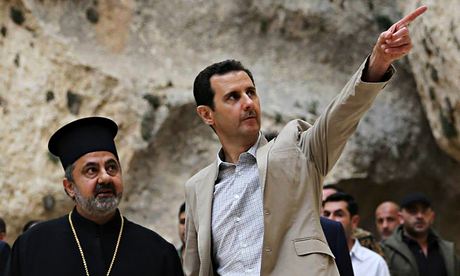 Bashar al-Assad, the Syrian president. Senior Iranian officials say: 'The Americans wanted to replace Assad, but what was the alternative? All they have done is encourage radical groups and made the borders less safe.' Photograph: Uncredited/AP

Iran and its close ally President Bashar al-Assad have won the war inSyria, and the US-orchestrated campaign in support of the opposition's attempt to topple the Syrian regime has failed, senior Iranian officials have told the Guardian.

In a series of interviews in Tehran, top figures who shape Iranian foreign policy said the west's strategy in Syria had merely encouraged radicals, caused chaos and ultimately backfired, with government forces now on the front foot.

"We have won in Syria," said Alaeddin Borujerdi, chairman of the Iranian parliament's national security and foreign policy committee and an influential government insider. "The regime will stay. The Americans have lost it."

Terrorism perpetrated by al-Qaida-linked jihadist groups and individuals armed and funded by Sunni Muslim Arab countries was now the main threat facing the Syrian people, Borujerdi said. Many foreign fighters who had travelled to Syria from Britain and other European countries could soon return. "We are worried about the future security of Europe," he said.

Amir Mohebbian, a conservative strategist and government adviser, said: "We won the game in Syria easily. The US does not understand Syria. The Americans wanted to replace Assad, but what was the alternative? All they have done is encourage radical groups and made the borders less safe.

"We accept the need for change in Syria – but gradually. Otherwise, there is chaos."

Shia Muslim Iran is Assad's main regional backer and has reportedly spent billions of dollars propping up the regime since the first revolt against the president broke out in March 2011. Along with Russia, the regime's principal arms supplier, it has consistently bolstered Assad in the teeth of attempts to force him to step down.

Western analysts say Iran is engaged in a region-wide power struggle or proxy war, extending beyond Syria, with the Sunni Arab states of the Gulf, principally Saudi Arabia.

Tehran thus has an obvious interest in claiming victory for the Alawite Syrian regime, which is fighting mostly Sunni rebels, they say. Iranian officials and regional experts deny that is their motive.

Majid Takht-Ravanchi, deputy Iranian foreign minister, said the priority was to accept the rebellion had failed and to restore stability in Syria before next month's presidential elections. "Extremism and turmoil in Syria must be tackled seriously by the international community. Those countries that are supplying extremist forces must stop helping them," he said."Iran has good relations with the Syrian government, though that does not mean they listen to us," Ravanchi said. He denied Iran had supplied weapons and Revolutionary Guards combatants to help defeat the rebels, as western intelligence agencies have claimed. "Iran has a diplomatic presence there. There is no unusual presence. We have no need to arm the Syrian government," he said.

Despite its influence with Damascus and Hezbollah, the Lebanese Shia militia fighting alongside government forces, Iran has been largely excluded from international talks to forge a peace settlement owing to US and British objections that Tehran does not accept the need for Assad to quit .

But following last week's rebel retreat from the strategic city of Homs, the so-called capital of the revolution, some western politicians and commentators have also reached the conclusion that Assad has won.

The US and its Gulf Arab allies have supplied funding, equipment and arms to the Syrian rebels. Last year, the US president, Barack Obama, appeared on the point of launching air and missile attacks over the Assad government's use of chemical weapons, but Obama's last-minute decision to pull back was interpreted in Tehran and Damascus as a sign the US was having second thoughts and was not wholly committed to winning the war.

"I think the Americans made a big mistake in Syria and I think they know it, though they would never say so," said Mohammad Marandi, a Tehran university professor. "If they had accepted the Annan plan in 2012 [which would have left Assad in place pending a ceasefire and internationally monitored elections] we could have avoided all this."

"Iran sincerely believed it had no other option but to support the Assad government. Anything else would have resulted in the collapse of Syria and it falling into the hands of extremists," he said.

More than 150,000 people are believed to have died in the Syrian conflict and at least 9 million have been displaced.