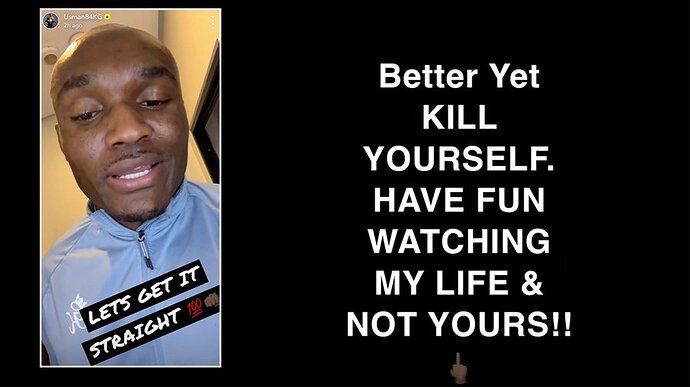 He’s feeling tense because he knows Khamzat is only fight away from wiping him and his entire legacy out from existence.

I don’t like Usman or Hazmat but I think Usman would beat him now. He has too much experience in long fights and he is so polished all around.

I think Usman is smart and would prepare for this fight. I think his strategy would be avoiding getting taken down early and avoid big shots. Ithink he would step on the gas in the championship rounds and would stop him.

If Usman waits too long I think Hazmat wins. Usman should fight Hazmat and fight bunch of cans before retiring

hilarious how fragile he must be, the second a troll says something he doesn’t like, he’s under the spell of testosterone and must intimidate his way through lol

Nick Diaz never told his army to kill themselves

I’m pretty sure he has a very low iq. Great fighter though.

If he did though I’d be devastated lmfao

Bro, I want to see this happen now, just to see your reaction lmao. Sorry if that makes me a monster lol

It’s crazy to think how even Nick would know not to shit on his own fans. So who really is dumb, Nick or Usman? Or is Usman just full of riod rage

Usman tried to damage control after. “No no no I meant my haters” even though his response was in response to a fan lmao

Lots of comments but where’s the actual video?

The only way I could become a fan of this guy is if he totally loses it.

Maybe he hits his wife and some fans/a Karen

hey, I didn’t mean for that to come out, I really didn’t. let’s just start again from the bit where you love me and are asking about my next title defence. Next question, thank you…

He’s feeling tense because he knows Khamzat is only fight away from wiping him and his entire legacy out from existence.

Comments like this are so fucking stupid. Usman is damn neat goat WW, gotta be number 2 behind GSP. A loss doesn’t change that