Vadim: Fedor doing it not only for the money

The head of the promotion company M-1, Vadim Finkelstein, former manager of Fedor Emelianenko in an interview with "Championship" Constantine Ustyantseva, shares his expectations for the return of the legendary fighters in the sport. Recall Fedor announced his return to the ring after a nearly three-year hiatus.
About return: "I was very surprised, experienced a pleasant shock and could not believe it. Personally, he tried to persuade year and a half, offered him to fight. At first he was in doubt, and then asked not to return to this subject, said that done. A month ago, he said: "Vadim, I might be back." Very pleased with his decision, because he was a huge potential. "
The reasons for return: "Over the last 10 years of career Fedor was not able to fully relax. All fights and training, there is no time to be with family. At some point, he tired of it mentally, he still had enough. Now that some time has passed, he missed and at the same time, much stronger mentally. Fyodor understands that it is his profession, he is able to do well. In addition, at all events pushed him to return. Apparently, he felt like it. "
About where Fedor will perform: "Of course, it's none of my business, but the choice is not so big - UFC, Bellator, Japan. It seems to me that the information on the return of Fedor came sooner than expected. He said to someone, he blurted out, and went. But he can not fight right now, it is necessary for at least six months to prepare. More likely Fedor will perform in America. Maybe, Bellator will make such an offer he can not refuse, but I doubt it. Or the same Dan White did not want to work with him. But I'm sure he wants and how! "
About how much it will cost, "I do not know. In the same part of the UFC earnings comes not from the fees, and the deal with pay-per-view. In the UFC or Bellator will certainly be binding to pay-per-view, because the fight will be shown in the paid mode. Will the basic guaranteed amount of 300-400 thousand plus so many dollars to the viewer. What tournament will gather as much money and will. "
The fact that Emelianenko has pushed back: "Recently, I was a bit moved away from Fedor and rarely saw him, mainly in the competitions. I know that he's happy to have it all well. Now he has the welfare of the family and that could push him to go further in the sport. He resigned from the ministry, but I do not know for what reason, because I loaded my work. I lead not only to M-1, and the World Federation of MMA, where Fedor - honorary president. I noticed that Fedor is doing well in terms of health and family welfare. He ate no anabolic steroids, unlike other fighters, which it subsequently affects so still retains the excellent form. Fyodor - purely Russian man who has achieved all his labor, and for a long time will be the number one in the world. "
The fact whether Emelianenko back because of money: "Many people say that it is I need money and I get Fedor to speak, but I do not know what motivates them. Money, of course, is not superfluous. It is the market and the decision to act depends on how much to pay. Do not be paid, not spoken. I do not think it's just because of the money. Besides them there are certainly something else. Because it used to be smart in terms of money supply but Fedor even heard of them wanted. Money does not cost him in the first place. He's the kind of person that if he ever into something poking, he will not do it. Fedor himself must ripen earlier. I myself have given up hope of his return, and was stunned by the news. Wherever he played, I am ready to support Fedor. Behind it always goes a train, and I am ready to sit there in any car. "
CRE July 17, 2015, 5:42am #2

Vadim sounds like he would take a bullet for Fedor. Yet it reads like Fedor and Vadim have naturally distanced from each other, due to work circumstances. This is a decision that Fedor made on his own..I hope the UFC signs him and gives him an immediate title shot vs. Werdum or maybe the fight with AA for #1 contender. 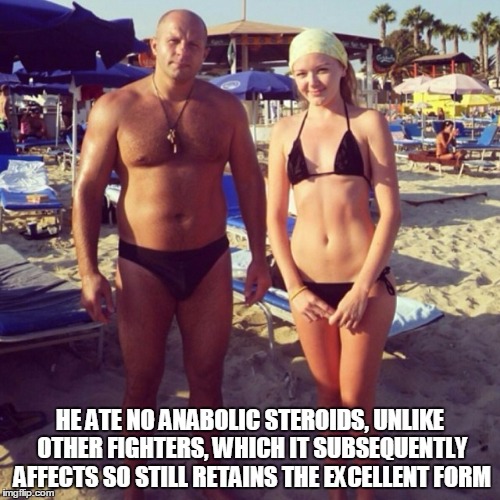