Vince McMahon bringing back the XFL?

As if 2017 has not been crazy enough, 2018 may be firing an opening salvo at continuing the insanity if one is to believe rumors swirling around the sports entertainment landscape. Nearly two decades after the original XFL shuttered its doors in 2001, the league may actually be on its way back.

There has been unsubstantiated talk about the XFL making a return for a short while now, but Brad Shepard reported late Friday night that WWE chairman Vince McMahon is so deep into considerations about reforming the league that there's even a potential announcement date -- Jan. 25, 2018.

Candidly, this would not normally be something worth paying attention to on its own, but there's no denying that WWE's response to the report appears to lend it some legitimate credibility.

In a statement shared with David Bixenspan of Deadspin, WWE clarified that it is not going back into the football business ... but McMahon may well be doing just that on his own.

"Vince McMahon has established and is personally funding a separate entity from WWE, Alpha Entertainment, to explore investment opportunities across the sports and entertainment landscapes, including professional football. Mr. McMahon has nothing further to announce at this time."

Wait ... really? Whether the XFL is about to rise from its heavily-charred ashes like a Phoenix or not, let's first stop and appreciate that McMahon has created a company called "Alpha Entertainment." Classic Vince. That alone is fantastic.

Back to the topic at hand. The original incarnation of the XFL was a joint venture between WWE (then-WWF) and NBC with McMahon and former NBC executive Dick Ebersol spearheading the project. ESPN produced a fantastic "30 for 30" documentaryon the successes and failures of the XFL that is a must-watch for any sports fan, but the long and short of it is that the league attempted to do too much -- too extreme -- too fast. NBC got uncomfortable, and once it pulled its support, McMahon's baby was dead in the water. (Ironically enough, the end of the doc features McMahon and Ebersol musing about whether the XFL would work today and lessons learned from the venture.)

I've long maintained that the XFL has actually received too much grief from those looking back on its failures years later. It had some ratings successes, the football improved drastically as the season went on (it was rushed into existence and teams did not get an opportunity to truly practice ahead of the season), and some of the game's innovations (sky cam) still used to this day were adopted by the NFL and other networks. The XFL failed in large part due to a confluence of misfortunes including technical difficulties, miscast announcers, changing the rules during the season, and McMahon's decision to go to the extreme by bringing adult themes into the game -- such as overtly sexualizing the cheerleaders.

Should this all come to fruition, the XFL of old would be tough for any network to stomach in 2017. Aside from the concept surrounding the cheerleaders, the XFL placed a heavy emphasis on old-school, no-holds-barred football. Considering CTE concerns and increasing attention to other health risks players face, that's an obvious issue to centering a league around such an extreme brand of football. Back in the day, the XFL even trashed the opening coin toss for the "opening scramble," which featured players running and diving for a football at midfield. One player famously separated his shoulder on the first scramble of the season and missed the rest of the year.

What one would have to expect should McMahon form another football league is a toned-down version of the XFL more akin to the NFL and college football but with enough unique elements that would set it apart from the pack. It would be instrumental for him to find a broadcast partner from the get go, and it would be interesting to see if he went straight for a popular streaming service considering the success he's had with the WWE Network.

But we're getting ahead of ourselves here. (Sorry, you can tell I'm excited.) Let's first see if this grows more legs over the coming days and weeks.

He should reach out to the million dollar man

Wouldn't be shocked if USA picks this up.

Could get on a streaming service? Maybe?

If anything, they got to bring back the nicknames on back of jerseys.. 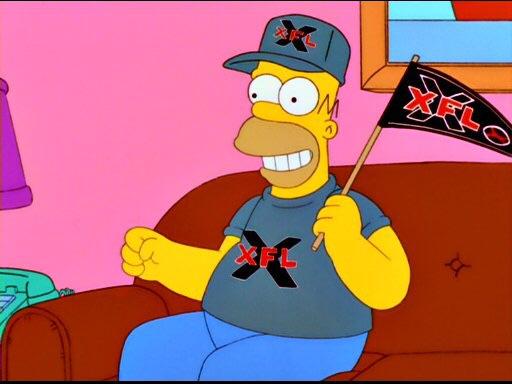 anybody who isn't excited about this can go straight to the darkest depths of hell.

70% of your team had to play hs football or college in the state or a state touching the pro team...

Somewhere in the quad cities

New England team (give them a bigger territory)

make the teams regional... don't lock them down to one city let them play a game or two around the territory to have some big sell outs....

It would be a betting dream, plenty of talent and people would love watchthing their old local/college stars on all star teams playing together...

I wish Vince and the reborn XFL all the best in their future endeavors.