Watching Ms Marvel with My Kids

Watch Freddy Krueger instead. Will give em nightmares

The remake with Rorschach as Freddy was fucking great. That dude was much scarier than Englund.

I thought it was good too.

That being said, I read an article that said no one is watching Ms Marvel, since it’s been out it’s the least watched of any of the Marvel shows.

My kids and I generally watch the Marvel stuff. Their really good stuff (e.g., Infinity War) warrants a look of the other stuff. Having said that, I’ve been happy to turn shit off. Didn’t make it past 1.5 episodes of Wandavision. Stopped watching black guy with wings + Winter Soldier. Didn’t make it past the opening scene of Moon Knight. Quit watching Hawkeye because it just got stupid.

I vaguely recalled people bitching about Ms Marvel being woke before it came out. The first episode didn’t come across that way to me at all, but they really started laying it on in the second episode. The first episode was pretty enjoyable in spite of being targeted at YA. The girl is charming. I’m interested to see how things turn out for her. This is a pretty big contrast to most of the Marvel characters in these spinoffs.

I’m against Muslim culture taking over America. But I have no problem with someone making a TV show that predominantly features Muslims, even in a positive light. If they want to target that demographic, good for them both (producers and audience). If they start acting like faggots I’ll turn it off. If they keep a good energy and momentum with interesting characters and a stimulating plot, I’ll keep watching. We’re watching the third episode tonight, I’m looking forward to finding out.

Watched it - it wasn’t that woke. It reminds me of first generation immigrant situation rather that a woke, Muslims are people too, approach. It’s actually pro-American, immigrant assimilation since all the young people act like American kids while the parents struggle to keep the old ways.

Besides, it did get me to research that India separation into two countries. That was rather horrific and neither the Hindu’s or Muslim’s should be reminding society that it happened.

IMDb seems to be the last “unbiased” review site these days: 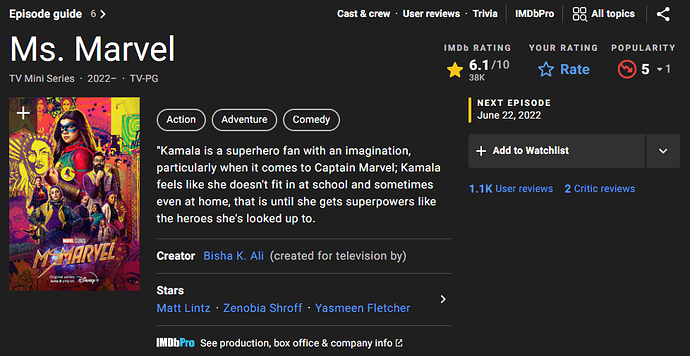 Rotten Tomatoes is bought and paid for by Disney. Anything they produce gets an automatic 25% bump.

The new Dr Strange is sitting at 74%. There’s NO WAY that an adult watched that movie and didn’t think “what the fuck am I even watching, this is retarded”. I’m usually pretty good at guessing the RT score. Both my wife and I picked 20%.