Fuck YES!! Brought this idea up to my wife (she’s a teacher) a couple weeks ago. Put cameras in every classroom and make it publicly accessible to all parents. She said it would never pass for two reasons…

The privacy concerns for the kids are valid but that’s an easy fix as you point it at the teachers, or if that isn’t feasible just put microphones in the rooms and stream the audio. But the Unions… Fuck them. We already know that some school boards are actively hiding the critical race teachings they’re pushing and not putting them in the curriculum. If the Unions and teachers don’t want what is being taught available for anyone to see, they know what they’re teaching is wrong and that is exactly why we should be making it accessible for the public to see. 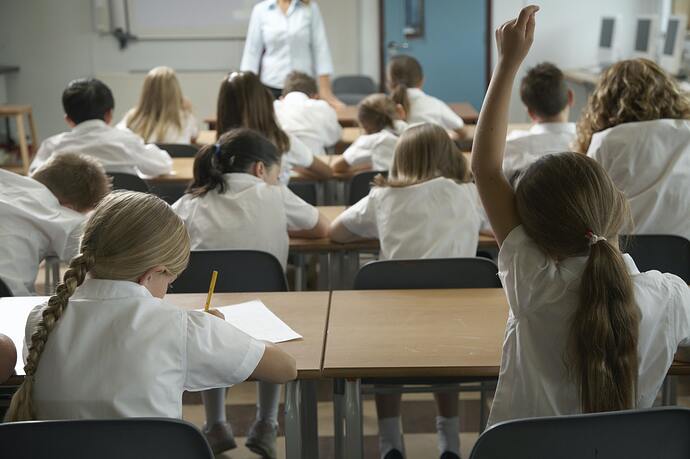 WALSH: We Have Cameras To Monitor Police Officers. Now We Need Cameras To...

If you want to take a trip and cannot bring your precious poodle along for the journey, you can always hand him over to your local dog boarding facility. And when you do, you’ll likely find that they offer what has become nearly ubiquitous at these sorts of places: a live webcam. Through this function, a customer is able to tune in any time and see how their pooch is being treated and cared for by the staff. Or they just might be curious to know what little Fido is up to and how he’s getting along with all of the other slobbering, mangy beasts. There are many potential reasons why a dog owner might want to have this kind of access, and it is hard to imagine any real downside to granting it.

Everyone agrees that there is probably too much surveillance going on in our society today, but most of the bad sort of surveillance is the kind where we are being watched, often without our knowledge, by people who have no right or reason to be watching us. On the other hand, most of us agree that surveillance can be good, and has a place, when it enables us to see what is happening with and to something we care about, like our dogs. Or our money, which is why nobody complains about bank tellers being closely monitored. Daycares — human daycares, I mean — have cameras for this same reason. It is not that we actively distrust the staff at the dog boarding place, or the bank, or the daycare. It is just that these people are handling very precious cargo, and transparency and accountability are therefore urgently important. You would certainly be quite suspicious of a dog boarder who steadfastly refused to put up cameras, or a daycare facility that wanted to grant its staff more privacy in their interactions with your toddler. “You don’t need to see what’s happening here. You can trust us!” Nothing would make you distrust them more than hearing that.

This is to say nothing of body cameras on police officers. The protection in this case works both ways. They create greater accountability for police officers while also potentially protecting cops from any false claims made against them. Just think about where the cop in the Makhia Bryant shooting would be today if he hadn’t been wearing his body camera. Witnesses and media reports claimed that a racist cop had randomly murdered a helpless unarmed child. It was only because of his camera that we quickly discovered the truth: the “unarmed child” was a teenager armed with a knife, and was in the process of trying to stab another teenager to death when the officer fired, saving the victim’s life. This is why, though police shootings themselves are often controversial, the body cameras allowing us to see these incidents generally aren’t. In the aftermath of any shooting caught on camera, you rarely hear anyone — cop or citizen — say that they wish we were not able to see it.

This all raises a question. If almost everyone agrees that we should have cameras to see what dog boarders, bank tellers, cops and daycare workers are doing, why don’t we have cameras to see what public school teachers are doing? If you wouldn’t send your dog away for a few hours without the ability to check in and see for yourself what is happening with him, why shouldn’t you have the same sort of access to your child? If we want this level of accountability and transparency for people who watch our pets, and handle our money, and care for our toddlers, and enforce our laws, why shouldn’t we want it — why don’t we want it — for the people teaching our kids?

The current and well warranted backlash against Critical Race Theory in schools represents something of an awakening for many parents. They finally seem to realize that the school system cannot be implicitly and absolutely trusted to teach children whatever it sees fit to teach them. Parents have a right to know what is being taught, and to have a say in it. Despite the ridiculous arguments put forth by many on the Left — and some especially feeble and useless members of the Right — teachers do not have a “free speech right” to say whatever they want to the children in their classrooms. Public school teachers are government employees, entrusted to perform a particular task. They should not have the liberty to deviate from that task whenever they like. They should not have the freedom to stand on their perch as teachers and assume the additional roles of counselor, psychiatrist, parent, and spiritual guru. Their job is important but limited, and parents ought to know whether and how it is being performed. Cameras are not the only way to accomplish this task, but they are an important tool.

When I took to Twitter to advocate for cameras in the classroom, I was met with intense pushback from many people — including many parents — who apparently don’t want to know exactly what government employees are saying to their kids. One common refrain was that cameras would infringe on “privacy” and “freedom” in the classroom. I understand the privacy objection as it pertains to the kids. As a parent, I certainly wouldn’t want a live classroom webcam that any person could use to monitor my children. But there are easy and obvious ways around this problem. The cameras could be password protected and only parents with custody of their children are given the code to access. Also, the cameras could focus on the front of the room, capturing just the teacher. Perhaps only the audio would be accessible to parents under normal circumstances, with the video being released whenever there is an incident or controversy, like we do with police body cameras. There’s also face blurring technology that could be utilized to protect the privacy of children.

Dozens of workarounds immediately present themselves, if the concern is over the privacy of the students in the class. But for many critics of the camera-in-the-classroom idea, the concern seems to be equally, if not primarily, the privacy and freedom of the teachers. I have no workarounds for that because public school teachers, in their capacity as public school teachers, should have only as much privacy as we grant bank tellers. We won’t follow them into the bathrooms and break rooms with cameras, but when they’re on the clock, performing the task for which they are paid, they should be monitored. If our money is too important to simply trust that the nice lady at PNC will be honest in her handling of it, then how much more important are our children?

The main thing we are looking to guard against is the psychological abuse of students through ideological and political indoctrination, but that is not the only thing. Keep in mind that, according to the Department of Education’s own study in 2004, nearly 10 percent of students are victims of sexual misconduct by educators. That amounts to three or four million victims at any given time. All the more reason for greater surveillance. Like police body cams, the protection also runs both ways. Teachers who are falsely accused of inappropriate actions can simply point to the tape. Teachers stuck in parent-teacher conferences, trying to convince oblivious parents that their little angel is actually a demon-possessed terrorist in the classroom, will now have video evidence to prove it. The advantages to cameras in the classroom can be enjoyed by all honest parties.

In the end, then, it boils down to this question: Is there anything that could happen in a classroom that you absolutely would not want documented on film? Whatever that thing is, it should not be happening in the classroom.

We are almost all on a ton of cameras we dont see everyday in public.

Teachers are right up there with the highest percentage of professions that abuse children.

Tell them that and they freak but it’s the truth.

They are on par with priests when it comes to abusing kids.

No expectation of privacy for students. Hasn’t that always been a thing? That’s why locker searches and pat downs are allowed, no?

They are on par with priests when it comes to abusing kids.

Almost as bad as Canadians… jk.

I’m all for this! They can keep the cameras pointed at the teachers and include audio. Every parent should be given access. Fuck the pedos and fuck CRT!

As an elementary teacher I wouldn’t care about my lessons being filmed, that happened all last year with Zoom instruction. I hate to think about being disciplined for laughing at a fart joke or something because some do-gooder mom watches every second of the feed.

Almost as bad as Canadians… jk.

This is the problem. Some one somewhere will get offended at something. Like the colour of your tie.

YOU WANT TO GO TO WAR, BAH-LAKIE?

It’s unfortunately the way the world is moving. I’m not against cameras monitoring what the teachers are doing and the lessons being taught, I just hate the idea of furthering the panopticon surveillance state and normalizing it with children. But with smart phones and chrome books being the norm I guess that ship has already sailed.

Some of the more ‘conservative voices’ on the OG pushing for yet more police state / observation.

Who would ‘man’ these cameras and determine what is appropriate or not? Would Unions defend teachers from lawsuits? Our taxes through the County / School district? Can liberals complain if they see a group of students praying in a corner and have the teacher fired for creating a hostile environment for non-religious students?

I think it appropriate for schools to teach the values of the community it’s in. Critical race theory is not that. It’s far leftist shit it’s just as inappropriate as teaching the Bible to a bunch of kids without the parents consent