Werdum:"If I didn't pull guard so much, I'd win" 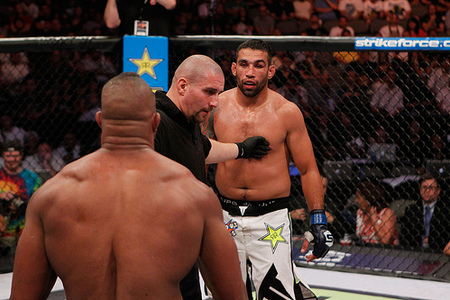 And that's part of the reason he had such a dreadful fight against the "Demolition Man."

It's not the whole reason, of course. After all, Werdum landed more strikes than Overeem this past Saturday night (June 18) in Dallas, Texas.

But he also employed what has become the most hated tactic this side of the Atlantic: pulling guard -- and butt scooting.

The latter is perhaps the most offensive to bloodthirsty viewers, quite a few of which tuned in to see the vaunted K-1 champion striking of "The Reem."

Often times he was hardly given the chance, thanks to "Vai Cavalo" flopping to the mat and begging him to come to the floor.

An issue with his knee may have helped that along but Werdum is also not happy with the way his opponents approach him and he made this clear to R7.com (via ESPN):

"If you look well, you'll see that my knee got out of place in the beginning of the second round. It hurt so much, it was difficult to get up and it took a little of my focus. I will have an MRI scan and see whether it is serious and when I will be able to train. I should have had more faith in my stand-up, listened to [coach] Rafael Cordeiro. Strategically he (Overeem) was better. Perhaps, if I hadn't pulled the guard so many times, I would have won. He didn't want to go to the ground with me at all but it is an MMA fight, you have to do the ground game as well. I think it is funny that [opponents] call me to go at them and I do, but when I call them to the mat, nobody does."

Werdum did indeed engage Overeem standing up, which played right into the game plan the dangerous Dutchman had in place.

The Brazilian even found moderate success there.

However, when he wanted to get the fight to the floor, "The Reem" did not oblige him, electing instead to avoid contesting the fight on the floor.

That ended up leading to one of the worst main event fights of the year, in any promotion. But is Werdum right to place blame on Overeem for not following him to the floor during the many times he was playing possum?

And now that we know he was suffering from a knee injury, do you give him more leeway for his antics in the cage? Or are you still ready to swear him off to the undercard?

people had great expectations for the fight and for the most part, it didn't live up to the hype.  But I for one, enjoyed it.

This is not a difficult concept.

it helped him not to get KO'd

lol he has no point. like others said.. u want him on the ground.. bring him and keep him there

he saved himself by pulling guard and flopping in these 2 exchanges, there were more times also

he seriously believes people should just get into his guard... lol

well shit, why don't the refs just start the fight that way

Overeem was scared to go to the ground.

Werdum hit him a ton standing.

BzGrappla - lol he has no point. like others said.. u want him on the ground.. bring him and keep him there

THIS. Its pretty sad to read all the bjj guys whine and bitch about how Overeem should have gone to the floor to fight Verdum. You want to fight on the ground, you have to get him there. Now bjj guys are asking for fights to be forced to go to the ground? wtf

This. The fight was boring, but I blame that on Werdum for pulling guard a thousand times

And I felt like the Barnett fight made up for that. War Barnett!

Are the piss test results back yet?

as others have said, Werdum should hone up his takedowns - clinch, double legs doesnt matter - and take his opponent to the ground.

Werdum had no choice but to do some fighting standing up because he couldn't keep Reem down. This is MMA, you have to be well rounded in all aspects to be a true champion. He should have banged more.. you live and you learn. I think still has a solid future.

liquidrob - it helped him not to get KO'd I think it is funny that [opponents] call me to go at them and I do, but when I call them to the mat, nobody does

It's not ADCC or Bully Beatdown, there is no grappling break for MMA.

"He didn't want to go to the ground with me at all but it is an MMA fight, you have to do the ground game as well."

If he didn't pull guard so much Alistair would have knocked the fuck out of him.