What country has the worst style of food?

They use lemon scented sugar syrup instead of honey infused syrup as well.

Yea, I’m gonna have to kinda… Disagree with you on that. Dirty Turks put pistachios on everything, and it has no place on baklava. Greek baklava reigns supreme… Though I can’t touch the stuff any more because it was always around growing up and now just the smell makes me slightly ill.

Is it really? I always thought it was Russian, and was made for me by a Russian. I was like hey, this doesn’t taste like anything, what are these chunks? She said beets. I said oh, I’ve had beets before, they have some flavor. Nope, not this time. At least it had sour cream for some reason.

Is it really? I always thought it was Russian, and was made for me by a Russian. I was like hey, this doesn’t taste like anything, what are these chunks? She said beets. I said oh, I’ve had beets before, they have some flavor. Nope, not this time. At least it had sour cream for some reason.

It is all mixed up and there are regional versions of it in most Eastern European countries, but the earliest written recipes refer to it as being “Ruthenian” which is another word for Ukrainian.

There are actually two different versions of disgusting leftover parts dishes that are common to a lot of cultures.

One is intestine/stomach based soups like menudo (in Greece were have patsa) that while they can be served whenever, nowadays seem to be most often eaten after a night of drinking too fend off a hangover. They’re usually pretty thick soups that are high in fat. Think Taco bell after the bar closes.

The next are the “eat every part including the asshole” dishes that are from cultures where meat could be really scarce. You couldn’t just butcher a new goat or sheep every night, cause pretty soon you end up with no goats or sheep. In Greece we have kokoretsi, which while not only looking like a turd on a stick also smells and tastes like a turd on a stick. 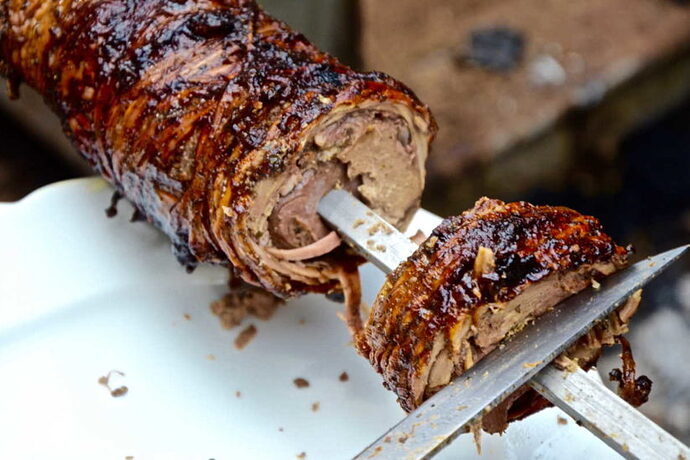 To me the worst is splinandero, which is basically just cleaned and fried small intestine. It’s like eating rubber bands that have a light turd aroma.

Any country that throws live dogs on a wok and sits there blithely while they scream - that’s the worst for me, I don’t give a fuck whatever else they make.

Yea it’s pretty gross. For the most part it’s only eaten on Easter now. Which is kinda weird. Nothing says celebrate the rebirth of Jesus like a tube of leftover lamb parts.

Canada sucked, it was like if you took our worst dishes and then took out what little flavor there was

They actually will eat these things when they don’t even have to.

A mud cookie, Galette or bonbon tè in Haitian Creole, is a food that is eaten in Haiti, particularly during pregnancy. They can be found in slums like Cité Soleil. Dirt is collected from the nation’s central plateau, near the town of Hinche, and trucked over to the market (e.g. La Saline market) where women purchase it.[1][2][3] It is processed into cookies in shanty towns such as Fort Dimanche.[3] First, the dirt is strained to remove rocks and clumps.[3] The dirt is mixed with salt and vegetable shortening or fat.[1][4] It is formed into flat discs.[1] Then, it is dried in the sun.[4] The finished product is transported in buckets and is sold in the market or on the streets.[2]

Due to their mineral content, mud cookies were traditionally used as a dietary supplement for pregnant women and children.[1][4] Haitians believe they contain calcium which could be used as an antacid and for nutrition, but this is disputed by doctors who warn of tooth decay, constipation, and worse.[5][4] The production cost is cheap; the dirt to make one hundred cookies was five US dollars in 2008 (about 5 cents apiece) even after increasing by $1.50 since 2007.[2][3] It is also seen as a way to stave off starvation.[1][4] This is especially true in times where there is a rise in global food prices like in 2008.[2][6]

The taste has been described as a smooth consistency that immediately dries the mouth with a pungent aftertaste of dirt that lingers for hours.[3]

Canada sucked, it was like if you took our worst dishes and then took out what little flavor there was

Where did you go?

Lots of Canadians will go to USA eat in some shitty restaurants and have this perception that ingredient quality is super low in USA and it’s all about serving a massive plate of food for cheap. Now of course that’s not the entire food scene but that’s the first impression lots of foreigners will have of American dining.

Argentinian grilling is inferior to Uruguayan, and both inferior to Brazillian and that is just the truth. Maybe it is because my family has a feedlot and have access to much better meat than the average person.

I wonder what gives it that dirt aftertaste

Lol ya i get that then, that’s probably pretty awful.

Best food is Vancouver and Montreal, followed by Toronto just because Toronto is so big so bound to have decent food around.