What happens when a UFC fighter in a fanny pack has his car jacked?

UFC welterweight Jordan Williams was driving to work in Denver, and stopped at a gas station/convenience store for some snacks. He exited his vehicle and entered the store. A thief, who had been waiting literally in the shadows, entered the car, and attempted to drive off.

When the fighter exited the store, he saw the thief in his car.

“At first I couldn’t really believe it,” said Williams to ESPN. "And then I was like, ‘Holy s***, there’s someone really in my car.’

"So, I run up to the car, and I have a push-to-start car. So, if my keys aren’t within five feet of the car it won’t drive. As I started to run towards the car it started to slowly back up. And man, the look this guy gave me on his face through the window was like, ‘Yeah, I got your car and this is happening.’

“I opened the door and, it’s funny, the first thing I did was throw the stuff I bought on the passenger seat. And then I proceeded to punch the guy. After the first punch he said, ‘OK, I’m sorry, I’m sorry.’ I was able to get some knees on him, as he was exiting out.”

The would be-carjacker can be seen running away, holding onto his head. That’s among the several best parts.

The thief lost his hat, as noted in the video. And Williams later found a ring between the seats that may also have been smacked off the criminal.

Regerts, I’ve Had a Few

Williams expressed multiple regrets. For one, he had believed that you cannot start the vehicle without the key being within five feet.

“So you can still drive without the FOB,” he clarified in the Instagram text. “So lucky I got there in time. And that he didn’t know to release the parking brake.”

“Wish I would of hit him with the trip after the clinch work when I tossed him out of the whip, and finish off with some ground and pound but I’ll settle with getting my car back.”

Williams followed up in a television interview with the local CBS affiliate.

“I wish I was able to apprehend him,” said the fighter. “Not to do more damage, to control this here, to make sure he is not out there doing the same thing. He is probably out there, having another chance to do that today.”

Williams also wants people to learn, as he did, to lock your car, and never leave it running. So the lesson for drivers is a simple one - when parking in public, lock the doors.

There are also multiple lessons here for aspiring thieves - lock the doors, remove the e-brake before driving, and be sure to responsibly wear your seatbelt. It can make it harder for a UFC fighter in a fanny pack to drag you out of a vehicle and punch and knee you. 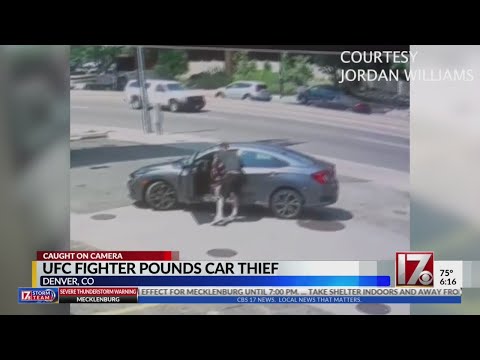 What Williams does not regret is the Fanny Pack.

Williams hashtagged his description of the carjacking as #thatfannypacktho.

“I know you see the stillness of that fannypack,” he wrote. “Fannyback game was on point this could be a commercial for them.”

Williams trains at Marc Montoya’s great Factory X MMA. Starting his professional fight career in 2013, Williams appeared on Dana White’s Tuesday Night Contender Series three times, in 2018, 2019, and 2020, before finally getting a UFC contract. He went 0-3 in the big show, and has not fought since a loss to Ian Garry on November 6, 2021.

While that is to some degree a disappointing ending, Williams was diagnosed with Type 1 Diabetes when he was 19, and ten years later signed a UFC contract. He is and remains a tremendous inspiration. Follow him on Instagram.