What video games are you guys playing right now?

It’s not completely surprising that Bugthesda shit the bed again. You’d think that Microsoft would have helped them.

I beat Yakuza like a dragon and it was awesome. Modern spin on the JRPG format. When you want to change the job of one of the characters you have to go into a temp agency.

After that I jumped into another JRPG Persona 5 Royal. Second playthrough, so I know the game is worth my time.

Started Axiom Verge 2. I’m not enjoying it as much as the first. 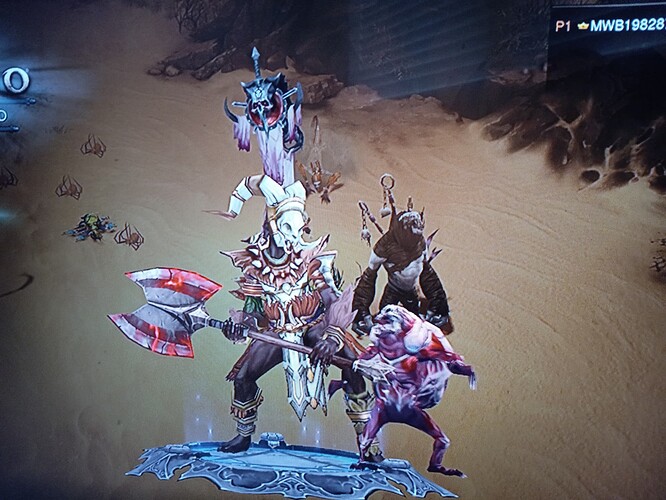 I’m really liking this guy. I never really played him or the monk before. Now I’m thinking Witch Doctor might me my second favorite class. I got him set up to summon 3 zombie dogs and a giant zombie. They follow me around and beat up bad guys. For his basic attack, he throws jars of jumping spiders. They jars break on the ground and little spiders run around and bite the bad guys. Plus the more I upgrade his armors, the cooler he starts to look.

No where near as strong as the Necromancer though even though they are both summoners. My Necromancer can summon way too many skeletons. My Witch Doctor is limited to 4 summoned helpers for now.

Waiting for Diablo Immortal. Another couple of weeks

I think I’m going to play Diablo Immortal too. Thats why I bought this Diablo 3 Eternal Collection.

I think I’m going to have to play as the Demon Hunter in Diablo Immortal if I want to be one of the top players.

He is a S tier in PvE and I have to think he will be S tier in PvP too. That’s if the classes have the same abilities as Diablo 3.

I’m looking forward to it.

Let’s do this, my kids gonna join me. They going to play crusader and necro

One of us can start a guild or clan. Whatever they are called in the game. I’ll be in there.

The only video game I’ve been playing for the last 15 years is Risk II for the PC. I play a game or two to wind down before bed, I don’t think anyone on earth has logged more hours in this game lol.

I’m trying too choose between Witcher 3, Total War Warhammer 2, Fallout 4 or Skyrim. Also afraid of starting any of them because they are all so vast.

Skyrim and FO4 are absolutely amazing. I’d play those two first because they’re so dense.

Visiting the final spots on the map for Fallout 3. I am up to level 27 before even finishing up putting fuses in at Project Purity. Did all the DLCs and visited all locations before finishing up the main story into Broken Steel. The Enclave always gets destroyed for doing Libery Prime dirty. So I make sure I am at level 30 before it starts so I can make sure they all pay for being Communists.

I always do everything on the main map before going to the others. I end with Point Lookout since my characters live there

I think my Witch Doctor is more powerful than the Necromancer. I been playing Diabo 3 till 4:30am. I got him to level 50. My Necromancer has to mow down enemies with a bunch of skeleton wizards. My Witch Doctor has a move where a big voodoo skull appears over the mobs and pukes green shit all over them. It wipes them out. 1 hit and I can spam it over and over. I’ve been running through the game puking green shit on everything.

I wonder how many people played Diablo 3 and slept on the Witch Doctor because all the other characters looked cooler.

I got a level 30 Wizard and I keep trying to play him over the years and he just sucks. From PS3 to Xbox One. I can’t get him going. It’s just slow progress until I pick another class to play.

The Witch Doctor can clear a screen full of enemies faster than any character I’ve seen so far.

I played them both before and I know how dangerous it is to start them.

Definetly a witch doctor fan over here. Many folks slept on him. I got some legendary gloves that automatically spawned double the normal amount of dogs or something like that. It got to the point where my buddies would ask me to hang back so they could get some kills in when we were playing together online.

I’ve only played the tutorial and one mission but it’s pretty fucking cool.