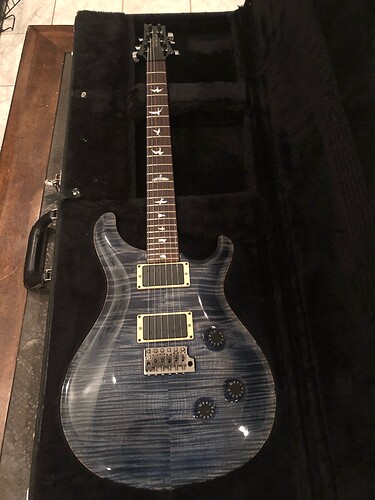 This thread has cost me a shot ton of money. Instead of scratching the itch buying the ten top just made it worse, and I ended up picking this up too:

Luke, nice! What model PRS is that?

Totally forgot when posting about ones I’ve owned that in ‘88 I bought one of these in cherry red. Mine was a dot neck, instead of birds, and also had a “sweet switch” that I guess was a sort of coil tap circuit, which I have never seen on any but the one I had. I’m sure it wasn’t unique, but certainly seems rare. It was $1300 in 1988 money. I was just noodling at home while my brother was a working musician whose Ibanez got ruined when his dumb ass wife put it in the trunk of her car on a FL summer day and left it all day. So I gave him the PRS. Couple years later he and his ol’ lady split and she moved up north. They decided to reconcile so he freakin pawned it to get the $$ to go up and bring her back, and never got it out of hock. I would have bought it back despite giving it to him in the first place before I would have allowed that, but he didn’t tell me because he was embarrassed by the situation.

That or a CE-24…hard to tell without seeing the neck joint. Either way, sweet guitar!