Don’t know if it’s just me, watching wrestling since the late 80’s.
None of these match ups for wrestlemania appeal to me whatsoever apart from Fiend vs Orton.
McIntyre annoys me immensely as does Shane O’Mac & Braun is booked terribly.
The triple threat match really needs to deliver however for some reason I doubt it will.
Anyone else feel this way?

I loved Roman as a heel at first, but now he bores me…not sure why. And I don’t see any case where he won’t be the one going over.
.
This is apparently Cesaro’s FIRST EVER singles match at Mania, which I’m more than happy for, but I can’t stand Rollins and very much feel like he’s the one that’ll go over.
.
I absolutely can’t stand Big E. I liked Apollo’s new gimmick until they had him start speaking with a Nigerian accent IN THE MIDDLE OF A FUCKING PROMO.
.
I don’t like the new burned Fiend and unless he comes out & squashes Orton, I don’t care. They’ve burned (pun kinda intended) the entire mystique of the character. (Word also is that it’s actually Bo Dallas playing the Fiend, now.)
.
I legit LOL when people bitch about AEW bringing in old WWEers or becoming TNA 2.0 for the same reason when the feud for the Raw belt at the biggest show of the year is a rehash of a TNA feud from like 6-7 years ago.
.
Vince doesn’t know how to leave a group or tag team together for more than a couple-few months without splittlg them up, only to pair them with someone else. Why did Hurt Busienss break up? Why was Retribution a clusterfuck from Day 1? Why did Otis & Tucker break up, only for Otis to team with Gable? Why did Sonya & Mandy break up, only for Mandy to team with Dana Brooke? Why did the Iiconics break up? Why are Lana & Naimoi even a team?
.
Sonya Deville as this quasi GM absolutely sucks. Her heel turn was one of the absolute best things going during the pandemic and was arguably the best storyline on SmackDown, carrying it through its time in the Performance Center.
.
WHY IS REGINALD ON FUCKING TV?
.
Every single bit of Carmella’s booking has either made her look bad or lose since her character refresh. There was no point in even rebooting her character.
.
I have no desire to see Logan Paul.
.
There was a time when Shane-o-Mac vs Strowman woulda excited me, just for shock value alone. Now Shane is dumping green slime from Nickolodean and Braun gets choo choo train sounds.
.
I don’t much care for Rhea Ripley, but she shoulda been a huge deal coming to the main roster. Asuka is legit one of the best female wrestlers WWE has, and while she’s had a long run with the belt, she’s been booked like shit. They built half their women’s storylines around Charlotte (because…you know…it’s Charlotte), which has now shit the bed twice. Now your Raw women’s title match feels like a last-minute afterthought and neither your new NXT call-up nor your champ for months feels in any way important.
.
Miz vs Bad Bunny. Fucking hell. Why is this even a thing? (I know, Bad Bunny gets a lot of youtube clicks & sells a lot of shirts. I don’t care.) Miz (and Morrison) have both been booked like absolute shit since going to Raw, and Miz might be one of the only wreslters in history that came away after being one of the company’s top two champs looking like a bigger tool than before he was champ.
.
I don’t know how you have this much talent in one company and screw up this much of it.

The only 2 matches I even remotely care about watching are Asuka’s and Sasha’s. Asuka because I hope they give her the WM moment she should have had when challenging Charlotte, and Sasha because I’m not sure who should go over in that match.

I’m only really into the triple threat, and not even that too much, but I hope and expect it to be really good and draw me in. Otherwise Cesaro vs. Rollins is the only thing I care about a little bit.

Takeover looks great though. Much as I hate Peacock, I saw a $3 cashback promotion on my credit card for spending $5 or more on it, so I can do the 4 months for $10 intro deal for just $7 net…hard to pass up with that Takeover night 2 card.

Nothing on Mania is even close to WALTER/Ciampa

Nothing on Mania is even close to WALTER/Ciampa

100% agreed.
.
Probably won’t happen, but I would LOVE for Ciampa to go over. I hate how he’s mostly been booked since coming back from injury.

Devlin vs. Escobar in the undisputed cruiserweight champion ladder match
Cole vs. O’Reilly unsanctioned
WALTER vs. Ciampa (night 1 on USA)
Kross vs. Balor (might not be such a barnburner as the others, at least not for most, but Kross is mega over with me ofc and I’m sure they’ll put together a proper main event match. I think Kross will show he can carry his weight and a little more vs. top talents.)
Gargano vs. whoever (I think Johnny’s a genius)

All this will blow away everything on Mania short of perhaps the main event imo. Will be a great show.

I’d even include Io but she’s against a monster type who I think will unfortunately squash her.

Asuka vs. Ripley should be plenty good on the Mania side, and I’m always ready for Asuka, but I have little anticipation for it since it was just tossed together. I also wonder why Asuka didn’t scoff at the NXT girl just waltzing into Mania title shots in consecutive(!) years. Asuka should’ve demanded Rhea win on Raw every week til Mania for the shot imo, which would’ve built Rhea and the match greatly, but I don’t expect anything sensible there these days.

It will be a real crowd. What are you talking about? It’s a live crowd in Florida.

Actually, you know what I’m really looking forward to? Bayley’s match with…
.
…oh wait. She’s not even on the card.
.
Their last SmackDown women’s champ, the longest-reigning SD women’s champ in history, holding the belt for over a year, barely six months later doesn’t even get booked for their biggest show of the year.
.
Now, I wasn’t necessarily a huge fan of Bayley’s “role model” gimmick and she did get stale at the end, but come on. How do you take someone from #1 woman in the entire company for a year+ to not even put on their most important PPV in just a few months?

I mean, it’ll at least be worth the price of the Peacock free trial.

Asuka vs Ripley and Sasha vs Bianca will be good but there’s absolutely nothing else I even remotely care to see on either night. I hope the fans are hot though seeing as how they haven’t had a live crowd in over a year.

I heard you can’t pause, rewind, or fast forward.

I heard that as well, and it’s totally scared me off, for those here still interested in the winding saga of Size Considering Peacock. I’m not sitting through a whole 2021 Wrestlemania just to see the good stuff, nor am I gonna bother getting a VPN for international WWE network. And sure I could just have it on in the background while I do other stuff, paying attention when I feel like it, but I’m just turned off by all this shit.

Nothing really stands out to me. I hope the Fiend does something cool. Edge, Roman and Dbry SHOULD be good. And Cesaro/Rollins.

This did make my pee pee tingle though. 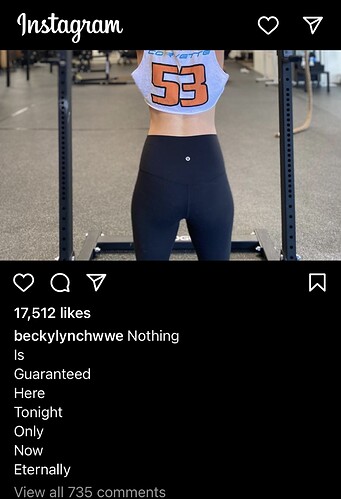 I heard you can’t pause, rewind, or fast forward.