Look at all of them fat ass losers outside of a mans home simply for his beliefs.

They are probably the sane ones who want free health care but dont even take care of their own selves.

I’m so fucking glad I live in a middle class area where trash like that doesn’t congregate. People here pay good money for their homes and work hard to keep what they have. No time for that kind of bullshit

What was the initial argument over? Anyone know?

He seems real sorry here, knows he has a mob after him…

The only thing I saw was the youtube comments which were saying that the white guy was bullying some older people and that the black guy was standing up for them, but those are just youtube comments so who knows.

Looks like the exact type of neighborhood I would never want to live in.

Someone should explain to the guy how taxes already work.

That was the best part. She claimed it was to make up for black paying more taxes in the past. Lol of course the little cowardly white cuck interviewing her said nothing about that ridiculous lie

wait, what? black guy pushed him first. they each called each other monkey … why is the white guy arrested?

Since Im not part of a “white tribe”, and am thus empowered to think anyone of any color is a shitbag, this fat white racist jailbird seems like a real shitbag, but the facts of the case leading up to his arrest are not clear. Whoever pushed the other first should be arrested, and if there is a law against saying mean words, whoever used the mean words should be charged for that.

wait, what? black guy pushed him first. they each called each other monkey … why is the white guy arrested?

Maybe because the white guy went to the black guy’s house, he’s considered the aggressor? Or maybe trespassing? 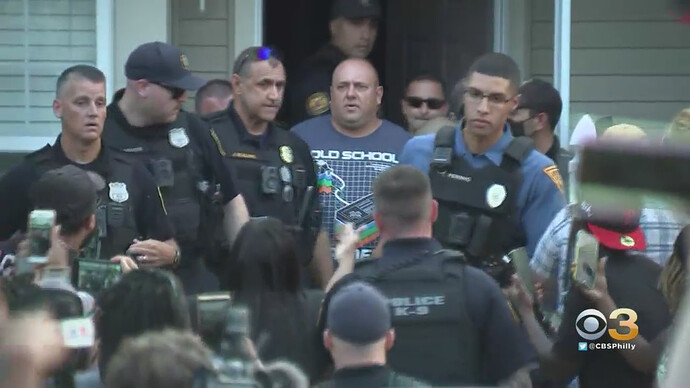 Police were called to Mathews' home Friday shortly after a disturbing video went viral where police say Mathews was "shouting offensive and racial slurs" at a neighbor.

"According to neighbors, the harassment went even beyond the use of racial slurs. One woman said Mathews kicked down her door and vandalized her vehicle.

It was a dramatic home removal for a man who many claim has been harassing neighbors outside of his Mount Laurel home for years.

Police were called to Mathews’ home Friday shortly after a disturbing video went viral where police say Mathews was “shouting offensive and racial slurs” at a neighbor.

“This is not Africa,” Mathews can be heard saying in the video. He allegedly continued to hurl racial slurs.

On Friday, Mathews was charged with biased intimidation and harassment.

“A judge decided that they should be on a summons so that evening, Mr. Mathews was released,” Mount Laurel Police Chief Steve Riedener said.

Glad they are focusing on the real issues affecting the black community!

Meanwhile more than 230 people have been murdered country wide this past weekend. Majority black victims and perpetrators.

But yeah let’s have a parade because of a racist dipshit.

MPA stays away from the Chicago shooting thread

What about people that punch other people because of race? I saw a ideo of a guy tackling an old man and killed him.

If the eye puts its gaze on you, they’ll show up to your house within 2 days. That’s what these people do.