You have to be one cruel motherfucker to want to shoot and eat an animal as cute as those.

They are disgusting. They roll around in their own shit.

They are becoming a plague.

One guy in Germany tried that last part, didn’t really catch on.

We just had our annual "Hogapalooza" at our hunt club this year. Total I think we took out 31 hogs, and total weight was like 3100 something pounds.

My son won the contest for largest- 210 lbs, and came in second for total combined weight. The guy that beat him beat him by 20 pounds.

We hunted the same stand together. When the sounder came out the first night there was the one big ass boar, and about a half dozen sows and alike 20 footballs. My son said he wanted the big one, so I lined up on one of the sows. I counted down to the shot, and waited until he shot before pulling the trigger. His brass hit me in the face and startled me, so I missed my first shot. As they ran, I got back on them just as they got behind the scrub between us and the feeder. I could make out the calico pretty easy, and popped off 2 rounds.

I got down from the feeder and walked over to the one my son shot and could tell it was in the running for largest. Then I went looking the two I shot.I saw the first sow, and didn't see a second one right away so I started looking for a blood trail. Then I found the second one I shot.It was about the same size as the one in the OP, lol. i wanna go shooting them, is it dangerous? 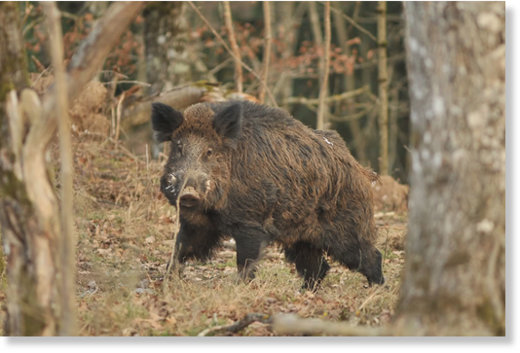 They are really powerful animals. Some of them have huge cutters (lower teeth) and wetters (the top teeth) that would gore the fuck out of you if you got hit. They sharpen their cutters on the wetters, and you can hear them click their teeth when they want to let other animals know they are willing to defend their food.

Unless you walked right up to one that was injured and it couldn't run, there isn't much of a chance of them attacking you. They spook pretty easy until they settle in to eat.

Are they good to eat?

Looking at the vids with the sows and piglets, I can see where a full auto gun would come in handy in that situation. Short controlled bursts to take out those fast small piglets before they can get to running in every direction.

I don't understand any of your redneck ways, but I think I am a redneck at heart. I'd love to kill and eat one. Heard they were good. Someone said there was a good private place in Maine to hunt boar.

I'm from Boston. Don't get me wrong, we have pigs everywhere here, but not the shooting and eating kind.

Witnesses reported that he fired off a shot and then moved into some reeds, where he apparently encountered the pig.

Police say the man suffered serious injuries to his left thigh and fell into nearby water. He died at a hospital and hasn’t been identified."

"I looked over my shoulder and saw a hog charging straight towards me. I was knocked to my back. I knew I had to fight and fight hard. I also knew that I had to keep that hog off of my thighs and my midsection, it was a matter of life or death for me.

I know how those tusks rip dogs wide open, I could not afford to take a hit like that. I kicked hard at the hogs nose, figuring I would make him not want to advance on me, that was the only spot I could maybe get his attention, as most animals the nose is their sensitive spot. He continued to rip at me with those tusks, which I could not tell how large they were. After a few seconds the hog acually bit my right calf, after he had already ripped it open, I just didnt realize that yet.

I immediately grabbed his snout with my left hand and took my gun off of safety with my right hand and fired a point blank shot into the hog, he immediately took two steps back. I tried getting another shot on him, but I had a miss fire.

I got up and heard sloshing in my boot, I took a peek down in my boot and I could see meat hanging and the blood was flowing."

Here is one of the cutters from a 180 pound boar my son shot. I'm making a European mount for him with the snout. Holy shit. I just realized I never sent you any of that sausage...

This guy was gored in the thigh, wrist, and hands. I remember reading about another guy who had his femoral artery ripped and bled out to his death by a hog a couple years ago. Shoot them from the air. This may just be my retirement pilot gig:

Fuck those things. I think I'd rather come across a black bear in the wild than one of those ugly fuckers!