On Saturday for the Man City game.

Good job I watch Football First on Sky instead.

The Gabby/Terry relationship disproves all theory of genetics.

Doesn't sound right...glad I got over here before the UK went completely batshit crazy!

Nope it's not Gabby.

Some other bird, and she does not warrant pic posting. 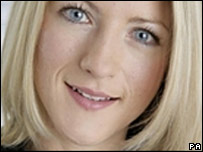 A woman is to commentate on BBC TV's flagship football programme Match of the Day for the first time in its 43-year history.

She played at an amateur level but had to give up after a serious knee injury.

She eventually secured a job on BBC national radio with Five Live.

Oatley, whose previous work includes reporting for BBC Radio Leeds and BBC WM in the West Midlands, did a postgraduate course before going into broadcasting.

Only one I'd have any faith in at all might be Eleanor Oldroyd. However, it's all crazy anyway - is she doing live link from the kitchen?

Why can't women find their own sport or at least wait another hundred years until womens football is remotely popular?

I'm hoping it's an elaborate joke and motty is going to be in his wool coat, but with a wig on and suspenders underneath; perhaps some lipstick. Now you're talking!

So, did anyone watch MotD? What was she like? I was in a gutter last night; didn't get a chance to watch.

She was only given about 5 mins but I didn't like it. When any goalmouth action happened she went really high pitched but not in a good Motty way.

When Fulham scored I think only dogs could hear her.

She reminded me of a 9 year old boy that has won some crappy competition on Blue Peter.

Haha you're right Adonis. Or someone that Jim fixed it for.

One letter is only the start of it, one letter and now you're a part of it....