I’d see them all the time in Chicago, usually opening up for other bands, before they hit it nationally when Siamese Dream came out.

They were always completely shitty live.

I remember Lollapalooza 1994 when they played here they switched their spot in the lineup so they would close the show instead of the Beastie Boys.

Beasties were kind of pissed and blew them out of the water. Even the local critics that swung by their nuts said they sucked.

About 3 tunes into their set, people left in droves, me and my friends included.

Also, Billy is a pompous asshole, based on personal experience.

You’d think that at their age now they’d appreciate pumpkins. Maybe even grow them.

I have a newfound respect for the pumpkins as they were excellent!!!

Billy Corgan is a hell of a guitar player and the drummer was fucking amazing.

Never really thought of SP as hard rock and always thought they were kinda pussyish but Jesus they were fucking awesome.

Tried to get the set list off the sound guy but he wouldn’t give it to me so I got a picture: 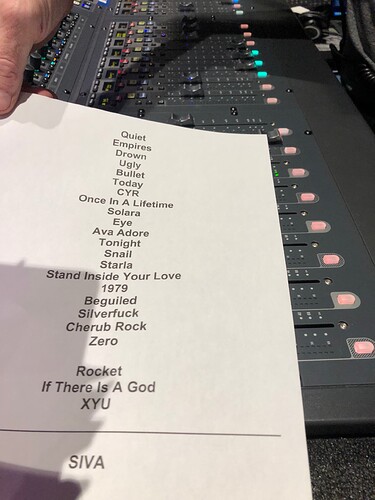 Gish was good. A few good songs here and there afterwards.

They still keep the sound guy back near the bar?

Met Billy Corgan the day he blew up the Bartman baseball. It was outside Harry Carey’s place. I know he has a rep for being a cunt. But he was awesome. Was there with a bunch of college classmates. He talked and took pics with us. When his handler kept telling him to go and that “they are waiting for you inside” he kept saying “they be there when we get there”. Was a surprisingly awesome meeting.

Yeah check out lull and Gish. Albums before Siamese Dream . They get after it

You’ve been to Irving? Nice.

I’ve almost fallen down those entrance stairs a number of times.

“Bullets with butterfly wings” was my jam as a kid and my first cd. I’d love to hear that shit live

You’ve been to Irving? Nice.

At the ufc in Houston I went to go get drinks. Walked into my wife’s tits and fell over and landed square on the dudes head below me. Like my stomach landed on his head and I folded him in half. I wasn’t even drunk (yet). I felt like king asshole. Luckily, I bought him a beer and then it turned we were in wrong seats so we had to move and I didn’t have to look him in the eye again.

Saw The Toadies open for Bush there in like 95 and I was high as a fucking kite. Nearly took a header down those steps when I went down to the bathroom.

Yeah, every song was a fucking killer.

When they busted out BwBW about 15 minutes into the I thought “Man, it’s a little too early for a song that popular” but they fucking kept the momentum going the whole show.

I went to college in 1993 and although you had all that music hitting then …… Siamese dreams is the quintessential album and sound that brings me right back to that era and my dorm room.

Crazy. I was listening to them talk about this in the morning and on my ride home

SD is an emotional album. The prog rock style of soft to super heavy & back again. It’s like an opera. When Billy’s voice was still emotional, whisper soft to screaming heavy. And much of the lyrics are open to your own interpretation to where it can really be personal.