Workers fired for refusing vaccine are unlikely to qualify for unemployment, thanks Biden

Each day more employers are telling employees they need to be vaccinated against COVID-19 to work in person or risk being fired.

On Thursday, CNN revealed it had fired three unvaccinated employees for violating the company’s vaccine requirement for in-person workers, according to an internal memo signed by Jeff Zucker, the cable network’s president, and obtained by the New York Times.

Unlike millions of Americans who were laid off during the pandemic, the three former CNN employees likely won’t qualify for unemployment benefits, employment law experts told MarketWatch.

CNN parent company WarnerMedia, a unit of AT&T T, 0.20%, declined to comment on the firings.

In most states, individuals have to prove they’re out of work through no fault of their own to collect unemployment benefits.

“This often means that they are let go due to a lack of work,” said Alana Ackels, a labor and employment lawyer at Bell Nunnally, a Dallas-based law firm.

But an employee who has proof of a medical exemption or religious objection to receiving a COVID-19 vaccine may still be eligible to collect unemployment benefits if fired, said Rebecca Dixon, executive director at the National Employment Law Project, a nonprofit that advocates for worker’s rights.

Otherwise, refusing to get a COVID-19 vaccine, if your employer requires one, “is akin to an employee’s refusal to submit to permissible drug tests or participate in safety trainings,” said Ronald Zambrano, employment law chair at West Coast Trial Lawyers, a Los Angeles–based law firm. That is, such an employee, when terminated, would not qualify for unemployment benefits, Zambrano said.

Ultimately, “this could lead to tens of thousands of people across the United States without work or access to unemployment benefits because they refuse to get vaccinated,” Zambrano said. 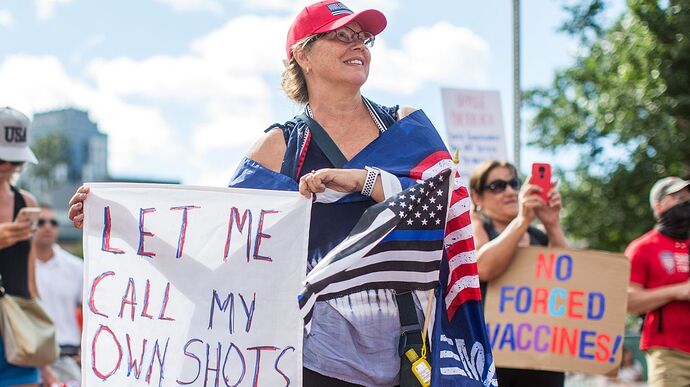 If your employer fires you because you won’t get the COVID vaccine, don’t...

'This could lead to tens of thousands of people across the United States without work or access to unemployment benefits because they refuse to get...

Should have Jan 6th’d harder

Yeah ok, I’m sure these employers have it in their contracts that state you must go though a medical procedure as a condition of employment.

And just like that… the Jahovas Witnesses gained millions of new members overnight!

This is communism bitch!

Communism is when you insert accurate description capitalism”

Who are exactly are these supposed employers?

I want company names, names of the CEO’s, management team, and BOD names.

Probably the last shot we had if we are being honest. The only thing these people understand is power and force.

Unless I’m mistaken, you only get unemployment benefits if you are laid off. If you quit or get fired you don’t qualify.

You absolutely get benefits if you are fired, as long as it isn’t something egregious/illegal that the employer can prove. As in, if you’re caught stealing on camera and they fire you, no benefits. But if they claim your performance wasn’t great or you didn’t follow orders well enough, you get unemployment. They can contest it, but the employees typically win.
Also, this CNN article by the slightly retarded OP seems pretty inaccurate, even though it has quotes from “legal experts”.

I don’t believe that cnn let anyone go over vaccines. This is more propaganda from the fucks at the commie news network.

You absolutely get benefits if you are fired, as long as it isn’t something egregious/illegal that the employer can prove.

I looked it up in my state. It looks like there is a fuzzy area and I suppose it would be up to the courts. Here is an excerpt from the rules:

Yup, and here are the specific reasons employees may not receive unemployment when fired:

And to the point of this thread, comparing not taking an experimental vaccine that isn’t even currently FDA approved to failing a drug test is beyond a stretch. Some states make it harder to get unemployment, but if this is litigated, I seriously doubt it goes the way of CNN.

And to the point of this thread, comparing not taking an experimental vaccine that isn’t even currently FDA approved to failing a drug test is beyond a stretch. Some states make it harder to get unemployment, but if this is litigated, I seriously doubt it goes the way of CNN.

I’m against mandatory vaccinations. I just don’t know how the law would handle getting fired for refusing vaccination. At least in terms of unemployment benefits. What may seem just or right to you or me may not be how it’s decided in court.

I’m quoting the law in regards to what currently applies to unemployment.

Unemployment is normally given unless the employer is able to prove one of the things I listed above (in most states). To do this, they have to first dispute the unemployment claim and then provide proof at which point it may go to a hearing if it is contested.

Basically, this article is bullshit. If the courts find that forcing employees to inject an experimental vaccine is akin to failing a drug test, or a simple “policy” disagreement, we are in serious trouble. CNN is lying with nearly everything they print though, so I’m not too concerned it will go that way.