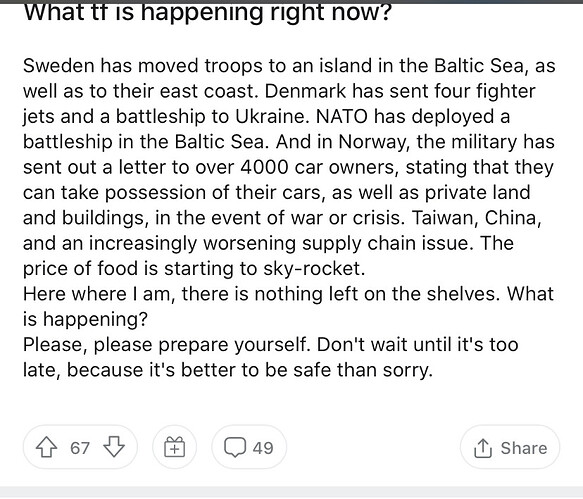 Soon as crimes against humanity cases start, they go all in.

There is some truth to that.

interesting ive been seeing studies and articles about how we should embrace eating bugs lol. yay Communism

saber rattling from the commies. they don’t want war any more than anyone else. this is theater to negotiate for something they’ve been denied previously. this is a textbook business strategy. I see it once a month from twerpy CEO’s that think they are being wronged somehow.

Nobody survives ww3. No one has that illusion. Let’s just hope that knowledge sticks with the elites.

depends. there is plenty of interesting WW3 scenarios that don’t involve the use of nuclear weapons.

No idea what that will lead to but I don’t think for a second potato Joe and his admin can handle it.

dumb post. no one has battleships anymore. reminds me of when Trump fired some cruise missiles into Syria and social media freaked out because Russia was sending a battleship into the Mediterranean. of course this was silly as Russia doesn’t have a battleship and it was just a little surveillance vessel that was already heading there. in short, don’t believe what you read on social media, because most people don’t know shit.

AIPAC is dead. And soon NATO will be dead too.