So nothing is even close to being a done deal, but apparently, WWE is in talks with NJPW about the dub being NJPW’s exclusive American partner. This would allow some WWE talent to go work in Japan, and (you’d have to assume) bring some top NJPW talent to come work in WWE.
.
Do you like this idea or not?
.
Personally…I hate it.
.
Firstly, knowing Vince, he’d probably put ALL the NJPW talent down in NXT. And nobody would be booked worth half a shit.
.
(I mean, look at how long it took them to give FUCKING KUSHIDA even the slightest of pushes…and he’s still only their fucking cruiserweight champ.)
.
More significantly though (and I’m sure this is the only reason Vince is chasing this), it would prevent NJPW from working with AEW, Impact, ROH, or anyone else in America. And given many of the indies let talent work in other feds, you’d have to assume that would mean WWE would heavily frown on NJPW working with say a European or Mexican fed that featured prominent stars from AEW, ROH, etc.
.
Like I said - it’s nowhere near a done deal. But still…

You’d think NJPW had learned its lesson after how Okada got treated but who knows… They are surely hurting for talent now. Lots of ways this is good or bad for both. It’s bad idea for the business in the long run so I won’t be surprised if it happens.

Vince to his Yes Men backstage: “Look at how well TNA booked this Japanese kid Okato! Let’s copy that! His countrymen will love us for it!”

hahahahahaha
.
Welp, looks like I have a new nickname for Peacock.

NJPW has long needed an app platform. Their current deal with Roku is a joke. I don’t see though how Da Cock has both libraries without having inter promotional exchange. Any talent exchange will not work in NJPWs favor. 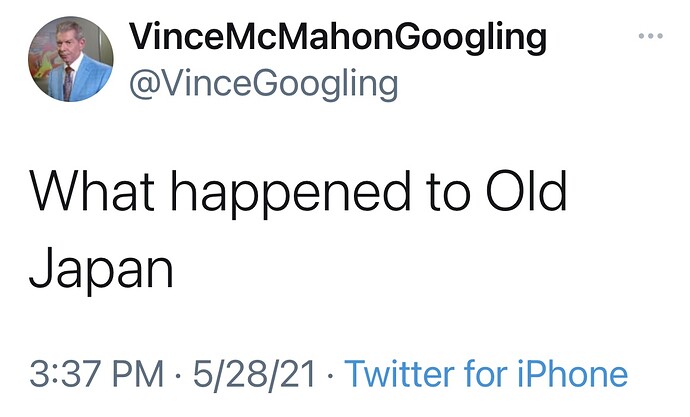 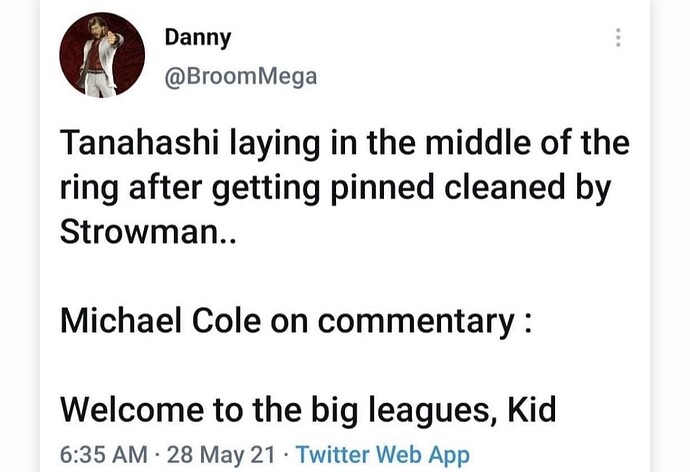 I’ll believe it when I see it.