I just cant remember WWE recognizing another company by name and their champion…except for ECW.

I cant see them making James look strong though, or maybe she will get a few eliminations to make up for the trash bag future endeavor. 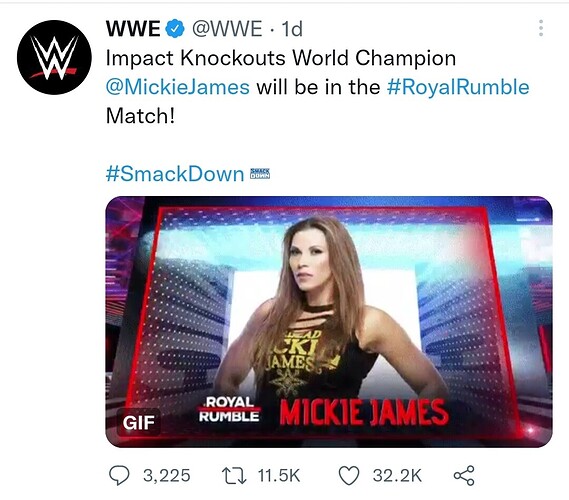 When she gets buried in this match - and she will - she will deserve every single bit of it for agreeing to go back.
.
So will Scott D’Amore & everyone at Impact that let this happen.

Unless Vince still holds a grudge against Impact as descendent of TNA, I think he’ll just book Mickie as any other WWE legend in for a shot, for better and worse. I think bringing her in and acknowledging her as an Impact champion, “world” champion even, indicates they look at Impact in 2022 as just another larger scale indie, i.e. a fly.

They’ve acknowledged the Viking Raiders as former ROH tag champions on commentary before, and Pearce as former NWA champion (in the lead up to “wrestling” Roman).

I know those are acknowledgments of talents’ past, as opposed to something current, but this is just a one-shot appearance, and she’ll more or less job to a WWE star in the end. Also, when WWE wants to use someone under contract somewhere else, they give something in return and the title name drop is most likely part of the package.

I’m surprised, and slightly disappointed that Mickie would do this after making a big deal about getting all her gear in a trash bag. She made it sound like the end of the world.

She probably just wants to return the trash bag.

With all the layoffs, they are probably having a hard time fielding enough female competitors.

Wrestling is fake, so might as well have fake champions…

Wait…WHAT? Does the press know this?

I don’t know. I think there isn’t enough evidence to support his claim.

no, i am convinced just based on this message alone. the name “RearNakedOilCheck” conveys maturity and wisdom. i find this highly credible

Wrasslin is more real than your favorite movie jerk!

Summer Rae confirmed for the Rumble, too.

That’s the old belt that they used to have on WWF before it became WWE…something about having to change their name because another organization. Had rights to WWF, I think. I remember when Chris Jericho had like two belts and one of them looked just like that one. Maybe its the same one.

I recognize Flair from way back in the Evolution days with HHH, but who is the other guy holding the belt? Just some lackey?

WWF had to change their name because of the World Wildlife Fund.

The man next to Flair is not a lackey at all. He is the greatest manager in pro wrestling history and he also happens to be one of the greatest broadcast booth and tv hosts as well. Very funny, witty guy who played a great heal. Bobby “the brain” Heenan. Watch some highlights of him. Best wit in the history of wrestling.

Flair actually owned the belt. Back then, to hold the NWA championship, you had to put up a large depsoit (claimed to be 20 to 40,000 dollars), which would be returned when you laid down for the next champion. Flair wasn’t in a contract dispute when he left WCW, he was a regular free agent, but he was in dispute over the belt, as the new-ish WCW said “Your deposit isn’t our problem.” So Flair showed up on WWF programming with the big gold belt to kickstart a champion vs champion storyline against Hogan that never happened.