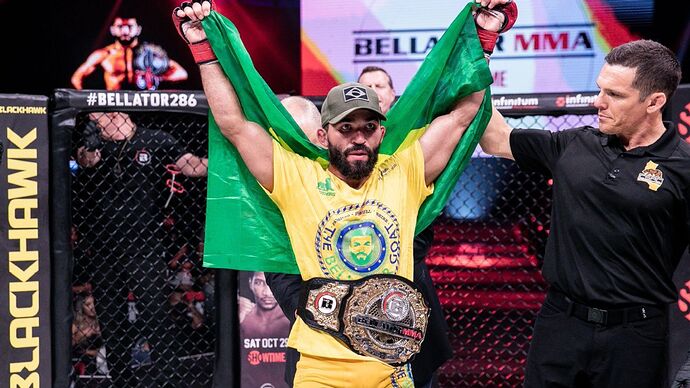 Bellator, Rizin fighters to square off on NYE card

Bellator MMA and Japanese fight promotion Rizin will co-promote a fight card outside Tokyo on Dec. 31 that will feature five bouts pitting top fighters from each promotion against each other.

Bellator MMA and Japanese fight promotion Rizin have worked together several times before but never on such a grand scale as what they have planned for New Year’s Eve.

The companies announced Monday that they will co-promote a fight card at 36,500-seat Saitama Super Arena outside Tokyo on Dec. 31 that will feature five bouts pitting a top Bellator fighter against one of the best from Rizin.

No specific matchups were announced, but Bellator said via a statement that four of its five representatives will be featherweight champion Patricio “Pitbull” Freire and three former champions: AJ McKee, who reigned at featherweight but now competes at lightweight, and bantamweights Juan Archuleta and Kyoji Horiguchi.

Horiguchi, although signed to Bellator, is the current Rizin champ in his second reign. During his first run with Rizin’s 135-pound belt, in 2019, Horiguchi competed in a Bellator-Rizin co-promotion bout in New York and defeated then-Bellator champ Darrion Caldwell to add that belt to his collection. Five months later, Horiguchi vacated the Bellator title because of injury-related inactivity.

A news conference is scheduled for Wednesday in Tokyo to announce some of the matchups for the Dec. 31 event, which will air in the United States in prime time on Showtime.

Bellator and Rizin have promoted bouts involving the other company’s fighters on other occasions as well. For example, before becoming Bellator lightweight champion, Patricky Freire competed in a Rizin bantamweight grand prix in 2019, making it to the final before losing to Tofiq Musayev. Musayev recently joined the Bellator roster. 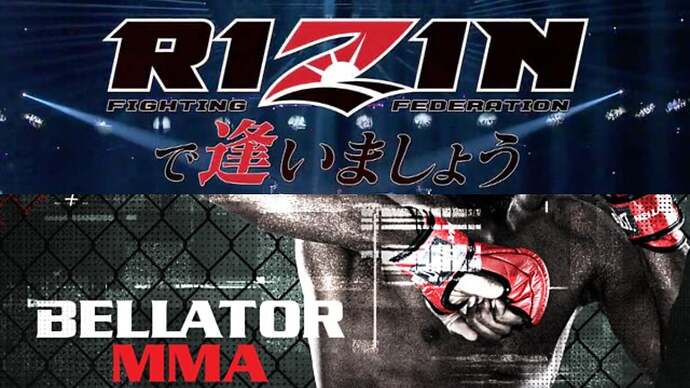 Bellator MMA and Rizin Fighting Federation will collaborate once again for a cross-promotion event on New Year's Eve. Per a press release, the North 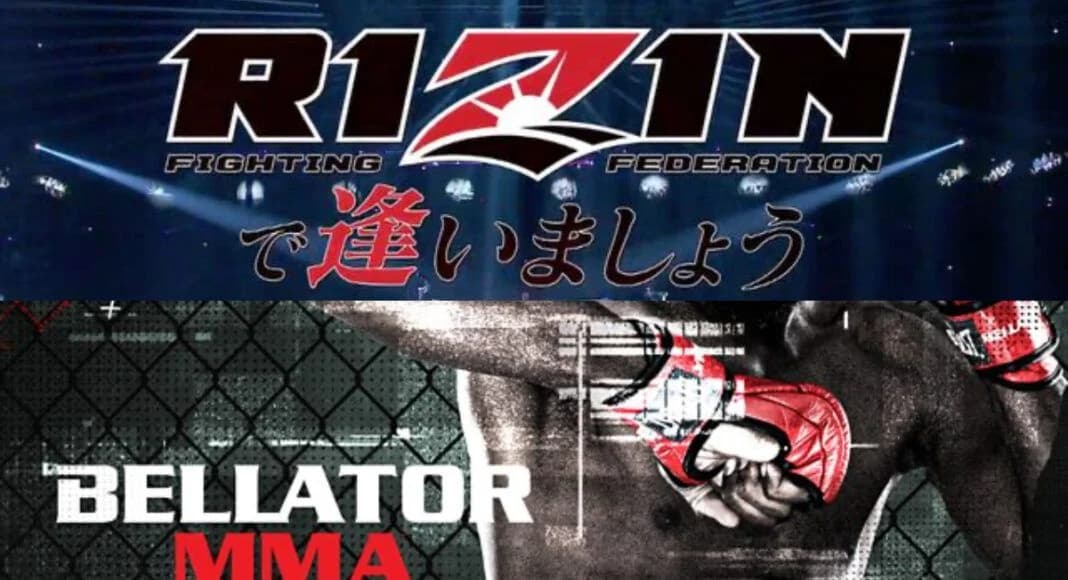 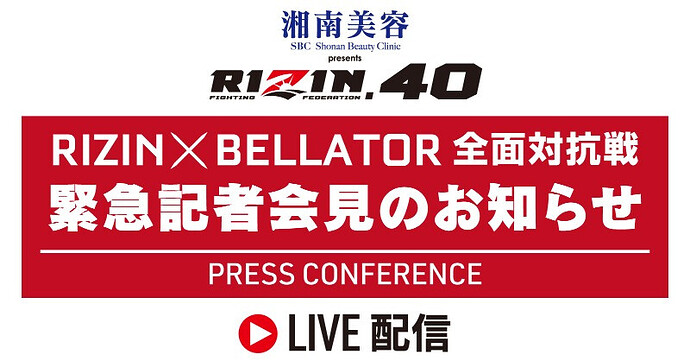 Bellator should bring Khabibs cousin to rep them 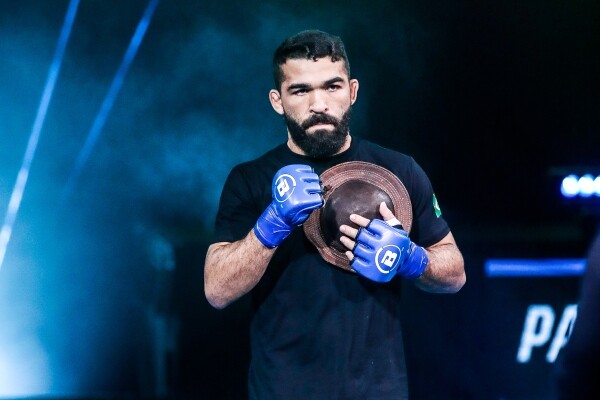 Bellator vs. Rizin set for New Year's Eve in Japan, including Patricio...

Bellator has been doing regular co-promoted events and fighter exchanges with Rizin for years, but they’ll raise the bar New Year’s Eve. 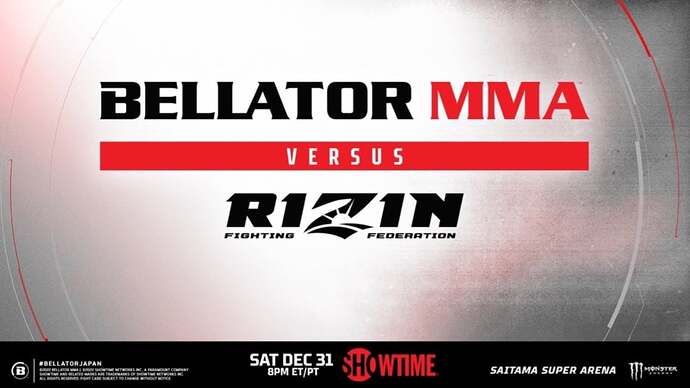 Four Matchups Announced For Bellator vs. Rizin On Dec. 31

Four matchups have been announced for Bellator MMA and Rizin Fighting Federation's latest collaboration, set for New Year's Eve in Japan. On Monday, 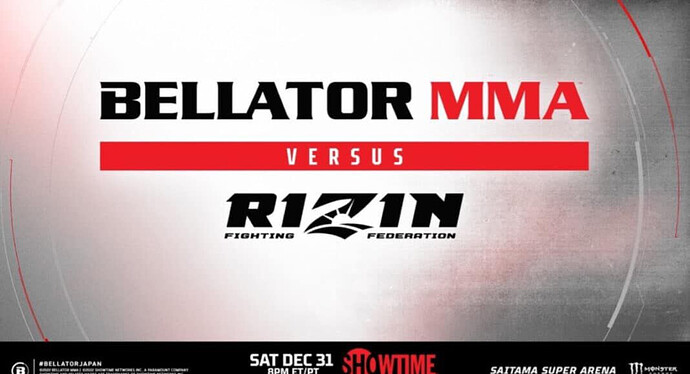 On Monday, it was announced that the North American and Asian promotions will pair up to close out the year with a card from the Saitama Super Arena, which is set to air at 8PM ET on December 31 in the United States.

Unlike their previous team-ups, the upcoming event will feature a unique promotion vs. promotion format, with each organization represented on one side of five matchups. More details emerged at a Tokyo-held press conference on Wednesday.

For the confirmed head-to-head bouts, with Bellator represented on the left side of the pairing and Rizin on the right, see below:

Bellator chief Scott Coker has long led a push for more cross-promotion events in mixed martial arts, and so far, that’s manifested itself into a lengthy relationship with Japan’s Rizin promotion.

While the latest collaboration will mark the biggest Bellator vs. Rizin event yet, with all five main card matchups pitting the organizations’ best against one another, the two promotions have worked together on numerous occasions.

Prior to 2019’s co-promoted Bellator 237 event in Japan, which was headlined by Fedor Emelianenko vs. Quinton “Rampage” Jackson and featured Rizin fighters on the prelims, Coker teased an entire promotion vs. promotion card down the line.

While the COVID-19 pandemic quickly put a halt to promotional travel, the two organizations are set to collide at another New Year’s Eve extravaganza, featuring some of the best in the sport. 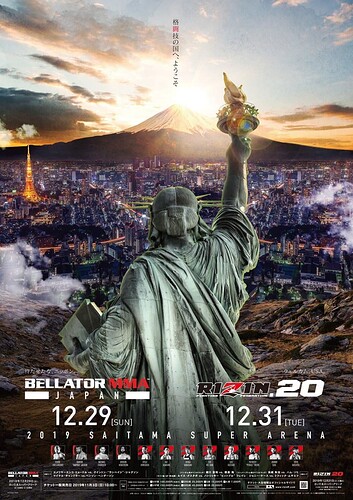 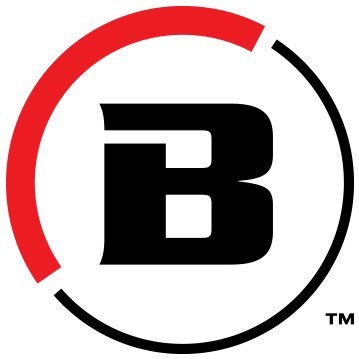 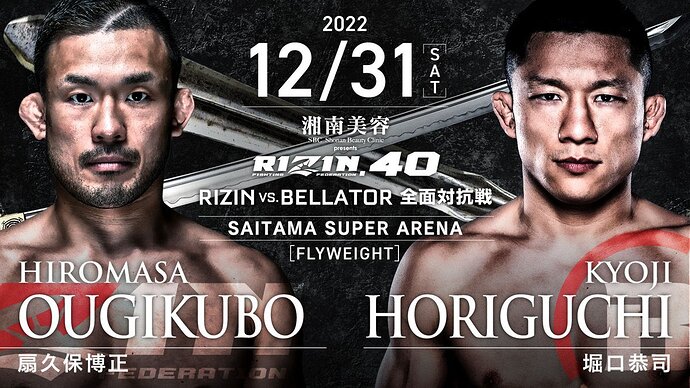 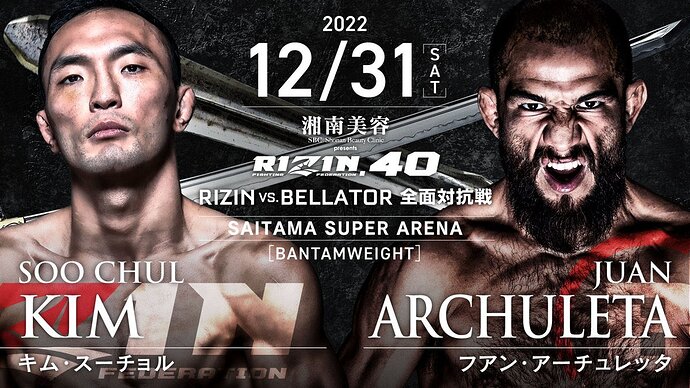 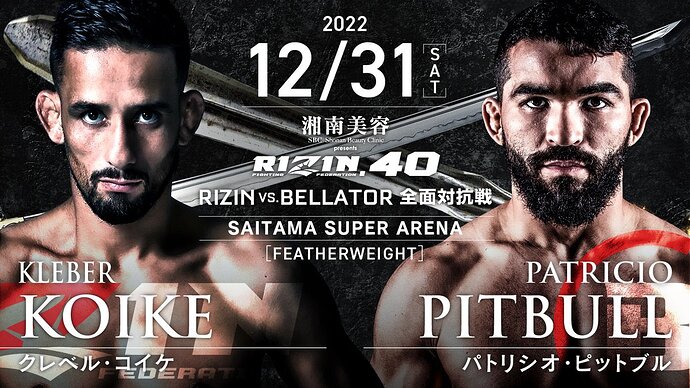 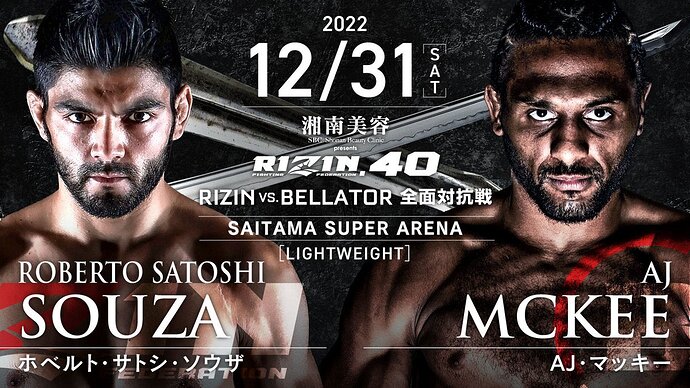 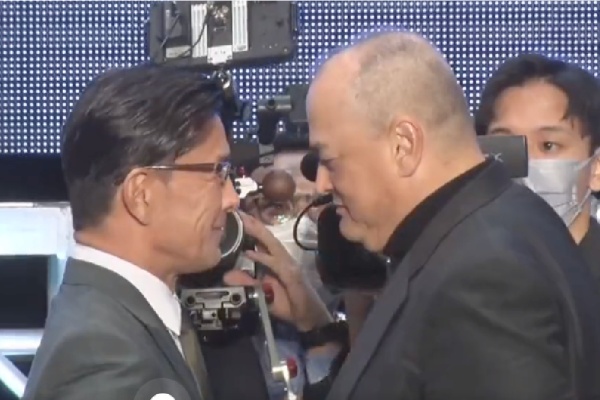 With the five Rizin vs. Bellator matchups for Rizin 40 announced, the events top stars faced off – and so did the men in charge. 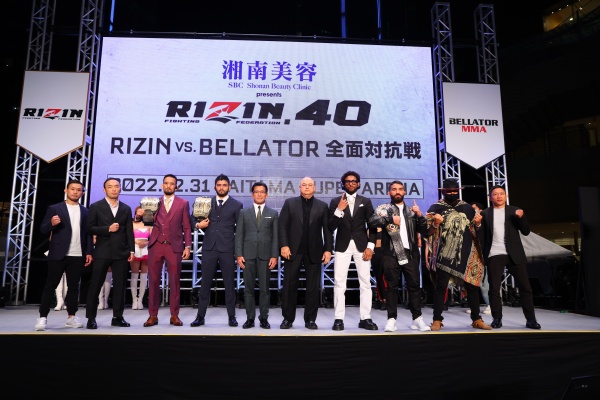 “The Bellator all-star team vs. the Rizin all-star team” is what Scott Coker says we have to look forward to this New Year’s Eve. 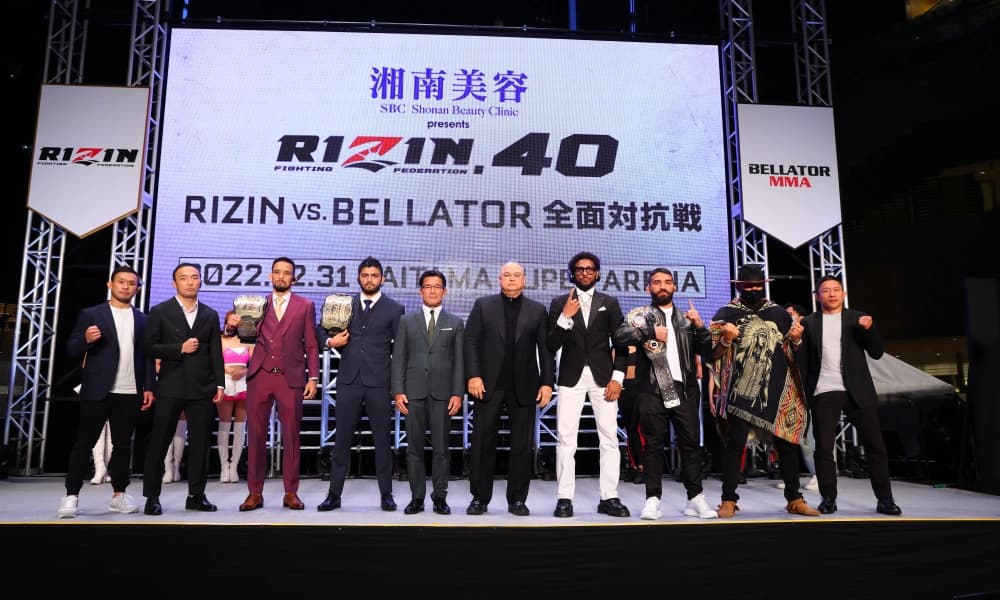 For A.J. McKee, it was watching “Rampage” Jackson kick ass in PRIDE back in the day. For Patricio Freire, it was Antonio Rodrigo Nogueira and Wanderlei Silva doing the same. For Juan Archuleta, “Dragon Ball Z” is what got him.

Since they were young, each of those three Bellator champions past and present have dreamed of fighting in Japan, hallowed ground for martial arts. They’ll soon have the chance after Rizin president Nobuyuki Sakakibara and Bellator president Scott Coker on Wednesday jointly announced Rizin 40 as a Rizin vs. Bellator New Year’s Eve event at Saitama Super Arena just outside of Tokyo.

Five Rizin and Bellator standouts each will square off. McKee will take on Rizin lightweight champion Roberto de Souza; Bellator featherweight champion Freire will face Rizin champ Kleber Koike; Archuleta will meet Kim Soo Chul at bantamweight; and Bellator’s Kyoji Horiguchi and Rizin’s Hiromasa Ougikubo will fight for a third time. A fifth matchup is still to be announced.

Rizin and Bellator have cross-promoted several individual fights in the past few years but never have they co-promoted a full Rizin vs. Bellator-branded card – until now. It’s all possible thanks to the friendly relationship between Sakakibara and Coker, who’ve known each other for 16 years and decided to start working together in 2015.

For Rizin vs. Bellator, the idea wasn’t just to pick any fighters from each organization to compete. It was to pit some of the best against the best.

“The Bellator all-star team vs. the Rizin all-star team,” Coker said. “This is something I wanted to see; this is something he wanted to see. When I asked Sakakibara about this event, ‘What are you looking to do?’ Because he brought it up about six months ago. And he said, ‘I want you to bring your best fighters in these weight classes. I don’t want any journeymen. I want the best fighters you have.’ So that’s what we did. Every fighter we’re bringing is either a champion in Bellator or a former world champion in Bellator. And we’re ready to fight the Rizin all-star team on December 31st.”
Rizin 40 will mark the 22nd consecutive year that Saitama Super Arena will host New Year’s Eve MMA action. As it’s taking place in Japan and a de facto home game, this first iteration of Rizin vs. Bellator will be contested in a ring – not a cage – and under Rizin rules.

The hope, Sakakibara said, is for this to become a tradition.

“I think this will be the first time in the history of MMA where two promotions will fully go at it with their best guys,”Sakakibara said through an interpreter. “… We do not want to make this event a one-shot deal. We want to make it a consecutive thing, maybe an annual thing, maybe a bi-annual thing.”

Hell yea Im pumped for this!