BJJ black belt vs. Kali expert with a real knife

Warning it is NOT recommended you try the below practice yourself, as these are both seasoned professionals in their respective martial arts.

For generations, Brazilian jiu-jitsu experts took on exponents from other martial arts disciplines including judo, boxing, kickboxing, capoeira, and karate. Then in the early 1990s, the landscape of martial arts was radically transformed after Royce Gracie’s multiple UFC tournament victories.

However, a massive question was left entirely unanswered - how would Brazilian jiu-jitsu fare against a weapon-based martial art? In the following video jiu-jitsu black belt Alex Embry from Alpha BJJ takes on Paul Ingram of Kali Center. Ingram specializes in the Filipino stick and blade art of Kali (also known as Eskrima).

Typically when training against knives, a rubber training knife is used. However, as Paul points out, that can create a false sense of security.

“When you’re training with a rubber knife, everyone is a hero,” explains Embry. “But you can’t grab [a bladed knife].”

So in the following video, Embry and Ingram decide to train with a live blade, to demonstrate the effect it has on training. Paul acts as the aggressor, while Alex has to use his Brazilian jiu-jitsu skills to neutralize the threat before getting cut.

Check out the full, raw video: 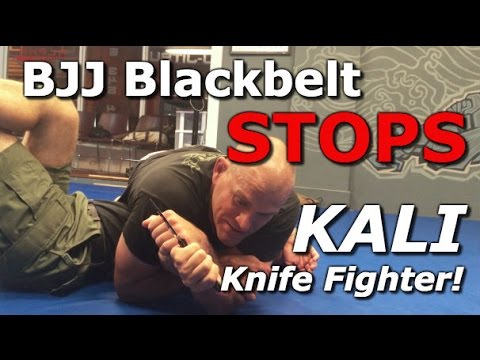 This is a beautiful example of experts from separate disciplines learning from each other, and strengthening their respective art. Further, by sharing their experiences on the social network, the effort incrementally elevates the entire practice of martial arts.

Author: Nic is a designer and illustrator alongside being a martial arts enthusiast. You can find some of his illustrative work for purchase here.