Is our neighbor to the north becoming a jingoistic petro-state?

It’s well known that America’s dependence on foreign oil forces us to partner with some pretty unsavory regimes. Take, for instance, the country that provides by far the largest share of our petroleum imports. Its regime, in thrall to big oil interests, has grown increasingly bellicose, labeling environmental activists “radicals” and “terrorists” and is considering a crackdown on nonprofits that oppose its policies. It blames political dissent on the influence of “foreigners,” while steamrolling domestic opposition to oil projects bankrolled entirely by overseas investors. Meanwhile, its skyrocketing oil exports have sent the value of its currency soaring, enriching energy industry barons but crippling other sectors of its economy.

OK, so our friendly northern neighbor isn’t exactly Saudi Arabia or Venezuela. But neither is it the verdant progressive utopia once viewed as a haven by American liberals fed up with George W. Bush. These days Canada has a Dubya of its own. And judging by a flurry of negative press from around the world—the latest: Archbishop Desmond Tutu and other African leaders are taking out newspaper ads accusing Canada of contributing to famine and drought on the continent—it seems anti-Canadianism could be the new anti-Americanism.

Stephen Harper, the son of an oil-company accountant, built his political career in Alberta, a province whose right-wing tendencies and booming energy sector make it Canada’s equivalent of Texas. Harper took over the Conservative Party in 2004 and became prime minister two years later on a platform that evoked Bush’s “compassionate conservatism.” In 2009, he quelled a Bush-esque Afghan-detainee abuse scandal by sending the parliament home to forestall further investigation. The Canadian economy weathered the financial crisis unusually well, thanks to strong banking regulations and booming oil sales to China, and in May 2011 Harper’s party won a majority for the first time. It has celebrated by veering rightward and doubling down on its oil bets.

Already in possession of the world’s second-largest oil reserves behind Saudi Arabia, Canada under Harper is aiming to more than double its output by 2035. Most of the new crude will come from the tar sands of northern Alberta, which are lousy with oil-rich bitumen. But extracting and refining that bitumen is lousy for the environment. It requires strip and open-pit mining, and the refining process is unusually energy-intensive. Producing one barrel of oil takes two tons of tar sands and several barrels of water.

Given that the Alberta tar sands already account for more carbon emissions than 145 entire nations, one would think Canada would have a hard time meeting international environmental standards. One would be right. Under a liberal government, the country was one of the first to sign on to the Kyoto Protocol in 1998. In 2002, even as Bush was gleefully thumbing his nose at the climate treaty, Canada ratified it, promising an ambitious 6 percent reduction from 1990’s carbon levels by 2012. Instead, emissions had risen 24 percent as of 2008. And in terms of energy consumption per capita, Canada is fourth in the world, 15 percent higher than the notoriously wasteful United States.

No worries. Last month Harper made Canada the first country to formally withdraw from the treaty, leaving it free to pollute as much as it sees fit. That has raised the hackles of environmental groups and other countries. When even China, the world leader in pollution, calls your environmental policies “regrettable,” you might be doing something wrong.

Far from being chastened by the outcry, the Canadian government has responded by circling the wagons and demonizing its critics. This month, Natural Resources Minister Joe Oliver issued an open letter accusing “environmental and other radical groups” of delaying major pipeline projects and calling for a “quicker and more streamlined” public review process. “It is an urgent matter of Canada’s national interest,” he explained. Harper has voiced concerns that public hearings will be “hijacked” by environmental groups funded by “foreign money.” Not if Harper’s party members in the House of Commons can help it: They’re planning a “review” of environmental charities that many tar-sands opponents see as a bid to limit their ability to advocate against the oil business. And Harper’s administration is boosting spending on military jets and warships while laying off hundreds in the environmental department.

Meanwhile, Ezra Levant, a Bill O’Reilly-style TV host on a network that has been dubbed “Fox News North” is leading an effort to brand Canada’s tar sands as “ethical oil” and regularly accuses environmentalists of abetting terrorists in Iran and Saudi Arabia. The jingoism has reached comical proportions in recent months as Levant has fueled a popular backlash against Chiquita—yes, the banana company—after it announced a boycott of tar-sands oil. The American corporation, he asserted, was run by “anti-Canadian bigots.” He concluded one anti-Chiquita rant by telling the company’s vice president, Manuel Rodriguez, “chinga tu madre.”

Even oil-hungry America is looking askance at Canada’s tar sands these days. President Obama this week rejected the Keystone XL pipeline, which would have connected the two countries by pumping tons of tar-sands oil straight from Alberta to Texas. Harper, for his part, quickly pivoted to China, again touting Canada’s “national interest.” The pipeline he is now pushing would send the same oil to the ports of British Columbia, crossing aboriginal lands and forests that have historically been preserved. The prime minister has made it clear he won’t let those concerns stand in his way, telling the CBC, “Just because certain people in the United States would like to see Canada be one giant national park for the northern half of North America, I don't think that's part of what our review process is all about.”

With less than 4 percent of its GDP tied up in the oil industry, Canada is not dependent on oil to the same extent as Venezuela (12 percent) or Saudi Arabia (45 percent). Still, the Canadians’ increasing reliance on crude natural resources has economists on the lookout for symptoms of “Dutch Disease”—a phenomenon in which a natural resources boom strengthens a country’s currency, making its other exports more expensive and less competitive on the world market. Remember when buying stuff in Canada was cheap because of the weak loonie? No more. After hitting a low of 62 cents in 2002, the Canadian dollar is now worth essentially the same as a U.S. dollar. That’s great for the federal government’s coffers but rough on industries such as manufacturing, which have lost hundreds of thousands of jobs in recent years.

yes, we have plenty of oil in the WFA oil sands 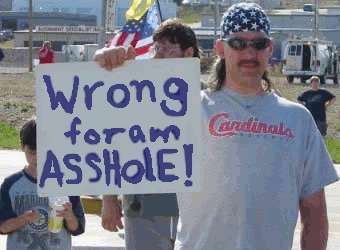 Such a stupid "article. When they mention Ezra Levant, the "Canadian Bill O'Reilly", they forget to mention that NOBODY watches him or the Canadian version of Fox News. They ratings are abysmally low. Whereas Fox News actually does very well in the states. There is only a tiny audience for that kind of thing in Canada, which tells you there is still a huge difference between the 2 countries. Sun News has been a colossal failure.