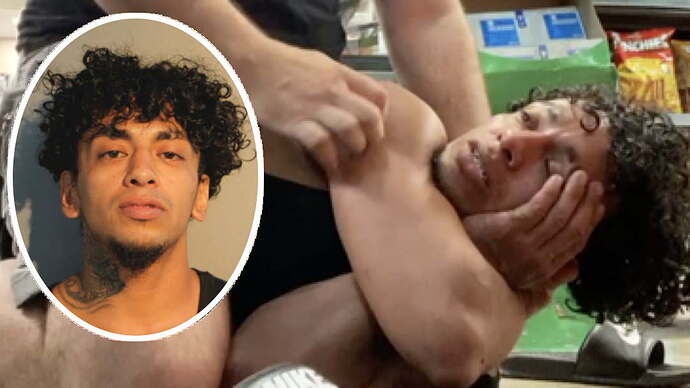 A 3rd-degree black belt jiu-jitsu instructor handily pinned a man who allegedly shoplifted and battered a 7-Eleven employee in Uptown.

Christopher Cruz had a bad night.

“He assaulted a 7-Eleven employee, so I jumped in and took him to the ground and did a gift wrap hold, which is taught in the art of Jiu-Jitsu,” Redzovic explains. He teaches the martial art at Supreme Jiu-Jitsu Chicago.

For more than 13 minutes, Redzovic effortlessly contained Cruz while waiting for Chicago police to arrive at the store, 1532 West Lawrence, after Cruz allegedly stole food and punched a store employee.

The task was so easy, Redzovic even propped his phone up to livestream everything. At one point, Redzovic’s car alarm activated outside. Redzovic cooly changed his hold on Cruz so he could deactivate the alarm with his key fob.

“You’re a Bosnian nothing,” counters Redzovic.

According to a CPD spokesperson, Cruz stole food from the store around 8 p.m. and then came back a little while later. A store clerk told him to leave.

“The offender took a fighting stance,” a CPD spokesperson said optimistically, “at which time the employee informed the offender that if he did not leave the police would be called.”

“The offender then punched the employee/victim and a witness detained the offender until police arrived,” the spokesperson continued.

Things got tense about six minutes after Redzovic’s phone started recording. Cruz bucked around and tossed some obscenities. He calmed down eventually and declared a pressing need for a cigarette.

When cops finally arrived, Redzovic eased off of Cruz’s back as two cops moved in with handcuffs.

“What’s going on?” another cop asked upon entering the store.

Cruz was charged with misdemeanor retail theft and misdemeanor battery. He was released from the police station on his own recognizance less than five hours later, according to CPD records.

Watched the whole thing. BJJ is super effective for a one on one control situation. Thanks for posting.

“Cruz was charged with misdemeanor retail theft and misdemeanor battery. He was released from the police station on his own recognizance less than five hours later, according to CPD records.”

At least Idriz got to publicize his dojo

That dude’s cool as the other side of my pillow!

I wouldn’t have minded if he, as Khabib would say, “changed his face” though.

Im assuming hes related to Adem Redzovic, who is very very good in his own right

Im assuming hes related to Adem Redzovic, who is very very good in his own right

I believe they are brothers

That was mo betta than judge judy

I admit I would have found it hard to resist doing some G’n’P here. Just a few elbows.