Irish MMA fighter Conor McGregor plans to acquire real estate in Russia. He stated this on the air of the program "Everything for the Match!". The record was published on the official website of the Match TV channel.

"I fell in love with Moscow, I found a great love in myself for Russia, for the people here," the athlete said in response to a question about how much he liked it in the Russian capital. - I love this place so much that I even want to buy real estate here. And one day I will perform in Moscow for all my fans, I will fight in front of them. Right now I am choosing real estate, I want to buy something here for myself

The host asked him to clarify what kind of real estate McGregor is going to purchase - an apartment, a country house, a whole house in Moscow, a skyscraper. "I want to buy a base, land, a house, something big," said the fighter. Subsequently, he said that land was needed to organize his own fighting gym.

Conor is trying to win Russian fans away from Khabib's corner.

How long until we see Conor hitting the Banya’s with his team?

StrikingMMA - Conor is trying to win Russian fans away from Khabib's corner.

How long until we see Conor hitting the Banya’s with his team?

This pic needs some enhancement 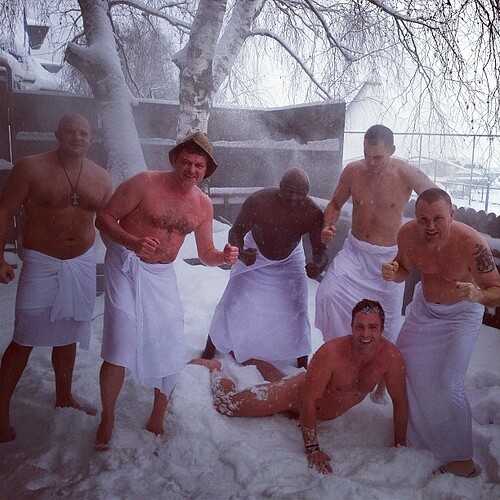