Conor McGregor post's pic of him with Aldo's belt.

LOL this is a great tweet lol “@TheNotoriousMMA: I bumped into @josealdojunior tonight. He didnt want any trouble. http://t.co/TXHPt6CWBn ” 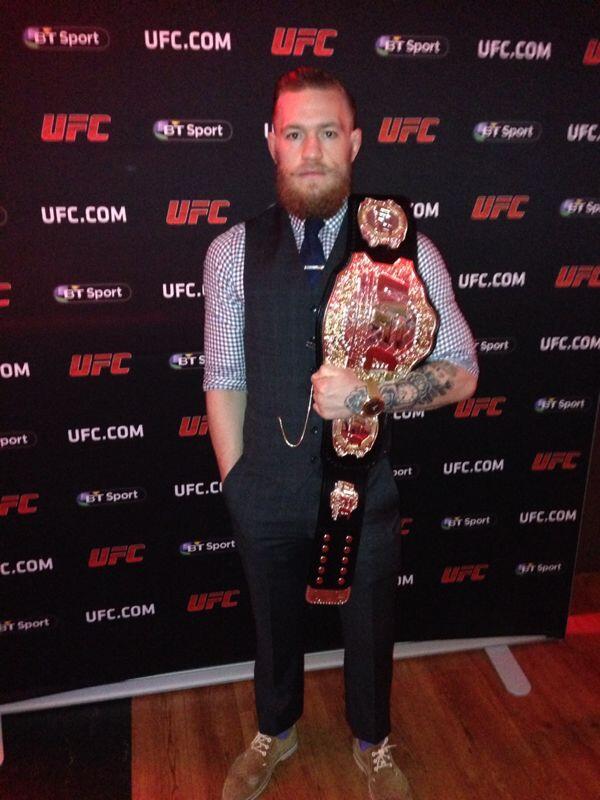 I like Conor but this is idiotic and shows a lack of respect.

Looking sharp as always. Big fan of both guys, let's hope McGregor can remain focused when he gets back into the game.

Unsure how I feel

bazza76 - Cole Miller will be pissed when he sees this :D

PS. What is the big deal? Its only a picture.

It is the equivalent of seeing Andrew Luck with the Lombardi or a soccer player with the World Cup. It represents the pinnacle of his sport and should not be tarnished in this way IMO

nice flood water pants hes got on there

Oh my God, an up and coming fighter made a non-controversial tweet that people are putting too much substance in-

everyone thought it was funny what sonnen did it...what's the big deal.

BringBackHeadbutts October 27, 2013, 12:00am #16
Please don't take my corrections in a negative way.
I am sure there are many people who have never seen Conor's fights and either heard an interview and jumped on his nuts, or heard about the hype and jumped on his nuts. I however, watched footage of him before he ever fought in the UFC, and it was what I saw in terms of his fighting that made me say to myself-"wow, this guy is good, really good".
Watch a couple of his fights on youtube and judge his fighting skills for yourself.
GayGuardMooseSaucy October 27, 2013, 12:13am #17

Douchey but expected from McGregor. Hope he enjoyed it because its the only way he gets the belt.

Conor McGregor has the potential to be one of the very best strikers in the UFC. He mixes "unorthodox" techniques like wheel kicks and tornado kicks with technical boxing. Not just technical punching but actual technical boxing. His stance, footwork, and posture are excellent, he chooses his angles well, picks up on opponent's weaknesses quickly, and is accurate.

The opening exchange demonstrates his solid footwork, posture, and strike placement. Marcus keeps wading in headfirst with strikes, while Conor stands upright and patiently times his shots. He may have already known Marcus was prone to dropping his head down but if not he realized it immediately and throughout the fight he punished him with either chopping left hands or upward strikes as he came in low.
This gif also shows Conor's superior footwork. He faces Marcus's centerline and as soon as his feet aren't oriented this way he resets back to the center as Marcus's feet are sort of all over the place. After the initial exchange, Marcus approaches Conor off to the side while Conor is still facing him, and Conor throws an upward strike, a knee, that glances off Marcus's head and if Marcus had ducked down slightly more as he tends to, the fight would have been over extremely fast.

^^As Conor enters striking range, Marcus predictably drops down slightly to strike or defend and Conor^^ strikes upward down the middle with a front kick.

Brimage runs forward with a punch and is countered with a perfectly timed short elbow. It took him less than a minute to find Marcus's range and be able to stay close enough after being attacked to counter him.

Marcus wades in with a hook and McGregor stays just outside range and counters with a short left hand.

He uses angles excellently. He will attack forward, upward, downward, or to the side as appropriate. He places his punches purposefully, in the moment, he clearly does not fire pre-made combos out randomly.

And the finish. He is practically clowning Brimage with the fact that he can uppercut him almost at will due to his predictable body and head movement. He can't seem to help himself but lead head first, head down towards Conor when he wants to punch him. Conor picks his punches well and drops Brimage and pounds him out.
SidRival135 October 27, 2013, 12:19am #20

Aldo takes this clowns lunch, eats it in front of him, then makes him throw away the trash.