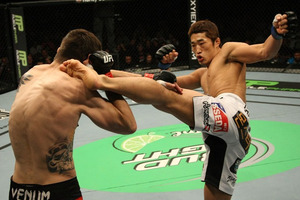 The UFC's New Years Eve weekend show in Las Vegas, scheduled to be UFC 141, has a new welterweight match-up set between Dong Hyun Kim and Sean Pierson, as announced by the promotion this afternoon:

A welterweight showdown is on tap for December 30th, as South Korea's Dong Hyun Kim returns to the Octagon for what should be an exciting scrap with Canada's Sean Pierson.

Kim seemed to be on a fast track to a title shot until those hopes were derailed by a brutal flying knee from Carlos Condit, that eventually led to Condit getting the title shot. That loss was the first of of the South Korean's career. Pierson is a native of Toronto who made the decision to quit his full-time job as a police officer after winning a decision (and a fight of the night bonus) in his UFC debut against Matt Riddle. Pierson may have been questioning that choice after suffering a quick and nasty knockout against Jake Ellenberger in his next fight, but he'll now have another chance to cement his spot among the UFC's 170-lb ranks.

Good chance for Sean to put himself back into a solid ufc spot.

I see Sean Pierson at Boston Pizza a lot.