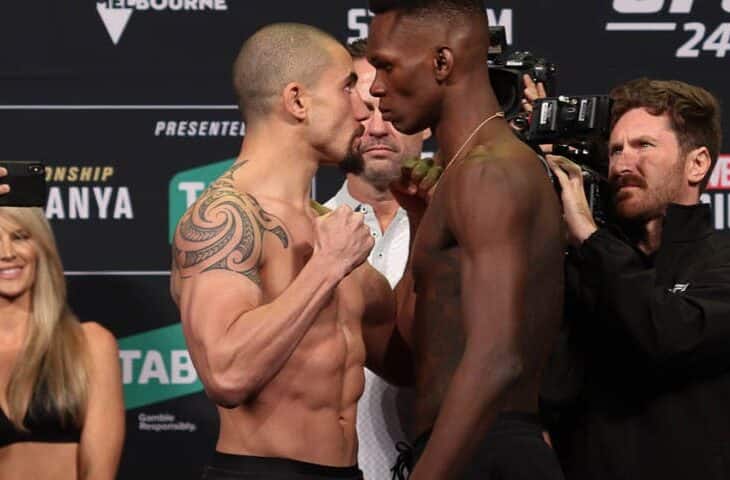 My brain says Izzy wins again. But I have this really really weird feeling Whitaker comes out with a completely different gameplan this time and takes him down repeatedly to win

Bobby knuckles is dangerous and smart.

Look for a new gameplan.

I watched the Countdown show. Bobby made a TON of mistakes in the first fight. He was spamming head kicks and high amplitude punching and catching nothing but air for his effort. The worst part is that it looked like he was committed to striking with Adesanya, which made him SUPER PREDICTABLE and easy to counter (note Adesanya dropped Bobby twice on almost-defensive counter striking).

I think Bobby can win this if he doesn’t act so desperate to win a stand up fight. Be patient and focus more on the takedowns. Consequently, his striking will be a lot more effective.

Izzy has perfect takedown defense and he gets up easily. Unless you’re some middleweight Khabib, you can’t take him down. Forget it.

It would have to be a takedown during an exchange, imo. I don’t think it would work otherwise.

Izzy wins again. And makes it look easier. Izzy’s striking is different level plus his length gives everyone difficulty.

He took Whittaker’s soul and Whittaker will look hesitant in there.

Whittaker needs the judges to win but doesn’t have the wrestling to hold him down or the striking to compete. Weird pick by Weidman.

Except Marvin took Israel down a couple of times and Jan took him down several.

Izzy likes to lean back while throwing and that was how he caught Bobby in the first fight.

He takes his head out of play and uses his length to still connect,

If Bobby doesn’t try to get in a fire fight he’ll be able to take Izzy down as he leans back.

Would love to see Bobby win this. I think he’s the more well-rounded fighter and last time he walked into Izzy’s strengths. With a better game plan I think a win is possible.

Having said that, I’d still bet on Izzy to take this.

Except Marvin took Israel down a couple of times and Jan took him down several.

As for Jan, different weight class. Robert isn’t a LHW.

Whit gnp to a decision

If Bobby fakes a TD and clubs Izzy with an over hand and ref has to pull knuckles off Izzy and waive it off, everyone here owes me 50 bucks.

If I’m wrong, you can keep it

Yep exactly what I’m thinking. Force the counter & shoot deep while he’s in the middle of it.

Yep exactly what I’m thinking. Force the counter & shoot deep while he’s in the middle of it.

When Izzy plants and leans back he can’t kick and he can’t sprawl.