..TOKYO (AP) — Two-time Olympic judo gold medalist Masato Uchishiba was arrested Tuesday on suspicion of sexually assaulting a teenager at a Tokyo hotel after getting her drunk, Japanese police said.

Japanese media reports described her as a member of the judo team at Kyushu University of Nursing and Social Welfare, where Uchishiba was a coach at the time of the September incident.

The 33-year-old Uchishiba denied the allegations, saying the sex was by mutual consent, according to the Tokyo Metropolitan Police Department.

Uchishiba, who won gold in the 66-kilogram class at the 2004 and 2008 Olympics, was fired from his coaching job at the university when the allegations surfaced.

Police did not identify the young woman, saying only she was under 20. The legal drinking age in Japan is 20.

The arrest of Uchishiba, who retired from competition in October 2010, triggers a criminal investigation, police said.

"This kind of thing shouldn't happen," said Haruki Uemura, chief of the All-Japan Judo Federation. "If this is true, this is beyond judo, it's a question of how to live as a human first." 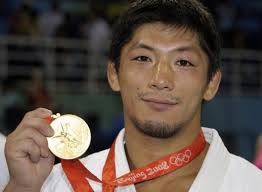 He just sutemi-waza'd a girl's hymen is all.