Joe Louis vs. Deontay Wilder Battle of the Bombers

Underground
CRE March 30, 2018, 5:38pm #1
Born in rural Chambers County, Alabama (in a ramshackle dwelling on Bell Chapel Road, located about a mile off state route 50 and roughly six miles (9.7 km) north of Lafayette), Louis was the seventh of eight children of Munroe Barrow and Lillie (Reese) Barrow.He weighed 11 pounds (5 kg) at birth. Both of his parents were children of former slaves, alternating between sharecropping and rental farming. Munroe was predominantly African American, with some white ancestry, while Lillie was half Cherokee.
Louis spent 12 years growing up in rural Alabama, where little is known of his childhood. He suffered from a speech impediment and spoke very little until about the age of six.Munroe Barrow was committed to a mental institution in 1916 and, as a result, Joe knew very little of his biological father. Around 1920, Louis's mother married Pat Brooks, a local construction contractor, having received word that Munroe Barrow had died while institutionalized (in reality, Munroe Barrow lived until 1938, unaware of his son's fame).
In 1926, shaken by a gang of white men in the Ku Klux Klan, Louis's family moved to Detroit, Michigan, forming part of the post-World War I Great Migration. Joe's brother worked for Ford Motor Company (where Joe would himself work for a time at the River Rouge Plant and the family settled into a home at 2700 Catherine (now Madison) Street in Detroit's Black Bottom neighborhood
The Great Depression hit the Barrow family hard, but as an alternative to gang activity, Joe began to spend time at a local youth recreation center at 637 Brewster Street in Detroit. His mother attempted to get him interested in playing the violin. Legend has it that he tried to hide his pugilistic ambitions from his mother by carrying his boxing gloves inside his violin case.
Louis made his debut in early 1932 at the age of 17. Legend has it that before the fight, the barely literate Louis wrote his name so large that there was no room for his last name, and thus became known as "Joe Louis" for the remainder of his boxing career. More likely, Louis simply omitted his last name to keep his boxing a secret from his mother.

Give us the Tale of the Tape.

Comparing the amateurish, windmilling Wilder  to the greatest heavyweight in history might be the most sacrilegious thing that I have ever seen posted on this forum.

Louis had effortless power from perfect technique. The greatest heavyweight of all time to me.

Comparing the amateurish, windmilling Wilder  to the greatest heavyweight in history might be the most sacrilegious thing that I have ever seen posted on this forum.

Joe was a 100 times the fighter Deontay will ever be... and if Joe Louis trained alongside modern fighters he would be the best among them. Slap yourself for making this thread.

guys haven't you all learned to not take him seriously by now?

Wilder is redefining the parameters of Bum of the Month Club 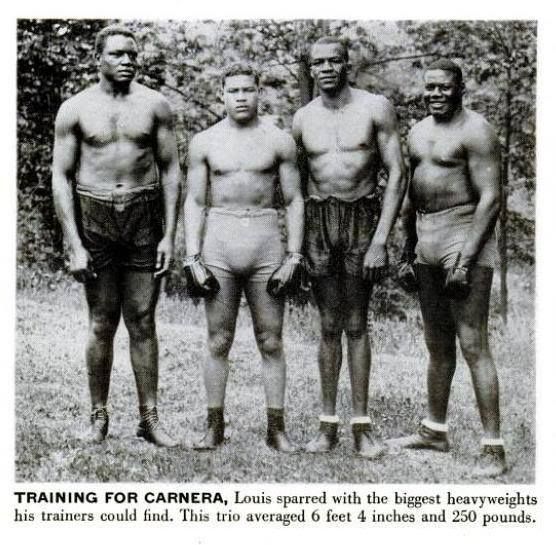 Is that Louis Ortiz on the right?

Yes. I knew he was lying about his age but didn't think it was that dramatic.

The Deontay Wilder haters have been out in force for years. He keeps winning and knocking people out. I've seen some converts.

Nice video, thanks for sharing.

The Deontay Wilder haters have been out in force for years. He keeps winning and knocking people out. I've seen some converts.

Nice video, thanks for sharing.


I found it be fairly presented with good content, including Jou Louis saying Wilder would be another bum on the bum of the month tour!