Khamzat officially moving up to 185lbs

Keep your thread bookmarked. I remember it lol

A great first establishment fight at 185 for Khamzat is Strickland. I think Chimaev destroys him but it’s a good fight for several reasons

MW is actually a much easier division for him as the Holland and Burns fights proved with far fewer grapplers.

The only MW’s I see giving him problems are Whittaker and possibly Costa.

Whitaker is definitely his worst match up at MW. I doubt they will pair them two together until after Chimaevs title fight, Costa is the fight to make for sure now and he gets past him then it’s the title shot.

They wont do Costa fight, Costa has 1 fight left on his deal and UFC isn’t going to give him a chance to have that kind of leverage. 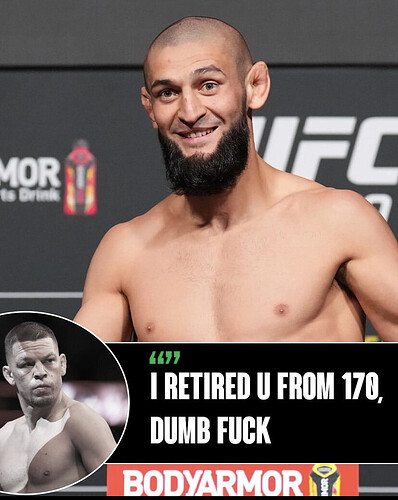 Yeah, Volkanovski is super lucky that a dude who is way bigger than him can’t make 145 too.

Strickland is his training partner and buddy. They ain’t fighting either. He’s stupid for leaving 170 where he’d dominate all

Khamzat vs Gregory Rodrigues, who wins?

Nah. He was pretty soft looking in his fight vs the leech and that was him coming in at 181 or so. Pereira is way bigger/leaner than him.

After he flat said he didn’t want to fight Whitaker and after he missed weight I have a hard time believing he’s as tough as everyone seems to believe he is. He still hasn’t fought anyone. I guarantee he’d struggle with Vettori and I think Vettori is a very basic fighter.

Khamzat needs to bulk up before facing the elite at 185. He’s not gonna get easy take downs on gorillas like Costa and Whittaker and Vitoria