Pat seems to have the maturity level of a 14 year old so is he really a Map, or a Clovergender?

Ehhh Calderwood,Ladd,Rose are all guilty of that. Megan Anderson fucked her coach then it turned ugly after that.

Ehhh Calderwood,Ladd,Rose are all guilty of that. Megan Anderson fucked her coach then it turned ugly after that.

Where do we see video of that?

God bless you strickland .lol@being scared of chomo pat in the streets .

@bignightmare2 will take it on the chin for his man

Pat is NOT a predator just because he fell in love with 13 yr old Rose the moment he saw her and became her life partner on her 18th birthday. Aint NOTHIN happened before then h8ers!

Although his delivery was harsh…Strickland is 100 percent spot on for both coaches.

A few points here…just because they were in the same gym doesn’t mean Pat spent any time with her. The gym I was at had different classes for the women, we had like 20 women there most days and I didn’t know any of them. There were like 2 that hung around and rolled a little bit during the men’s classes from time to time, but it was rare, and they were adults…and they were really good grapplers…not high school girls just getting started in their training.

There were separate classes for the teens/kids also…and we were a small gym compared to Roufos sport. I highly doubt 14 year old girls are hanging out with the MMA fight team, especially 14 year old girls who are just starting to train as Rose described above. Even teenagers who were competing in grappling events, they didn’t practice with us and we never really crossed paths.

Was Pat running classes for the teenage girls? I haven’t read that anywhere, so it’s very possible I’m wrong. If he was teaching the beginner teen classes then started dating one of them, it’s weird as fuck. However, if he was just a top pro fighter from the gym? I doubt he ever really interacted with the teenagers, boys or girls.

Not saying that makes it cool or anything, just pointing out that she’s saying they met when she was 17, not 14 like many have said here.

If he was her coach at 17 then started dating her, that’s weird. If they met casually at the gym and didn’t start dating until later…then he started coaching her after they were dating? Less weird IMO.

Liberally very coach dates a student in some capacity at the very least getting laid, if not the coach it’s a high level black belt or brown

What’s the story on Megan?

I want to fuck her so I care

poor girl couldnt break out before she got bumrushed 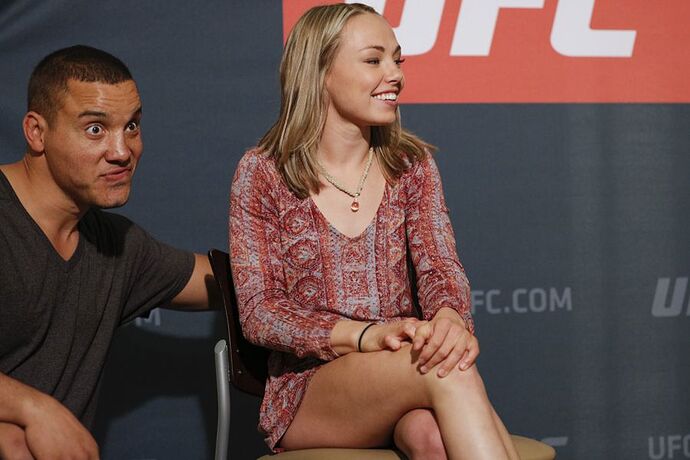 Rose Namajunas has always had the attention of the public. She first broke out when she was just 25 – at the time she had defeated the reigning champion Joanna…

Pat says he fell in love with her the moment he saw her. You guys can make up all the hypothetical scenarios you want but thats from him.

She was a young teenager from an abusive broken home starting MMA and a 27 year old UFC veteran at her gym fell in love with her. She was probably in awe a grown man ufc fighter had interest in her, and Pat was in awe of how sexy a 14 year old girl looked to him.

She was banging James Crouch dude. Think he’s married. I have no idea what I’m talking bout brotha

I got a source inside that gym. He’s pretty sure it happened. Plus, there’s a reason Megan isn’t training in Kansas City anymore and why she isn’t doing her mma show with sanko anymore either.