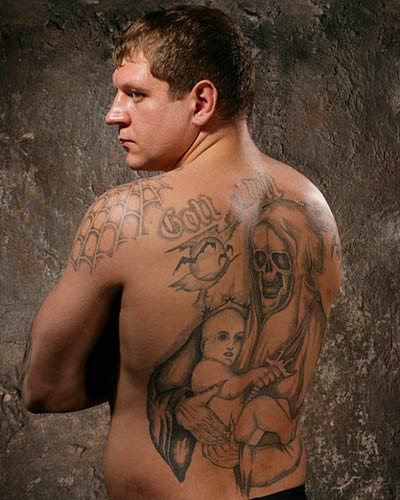 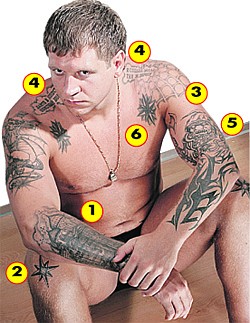 Here's google-translated article on the meaning of Aleks' tattoos for you.

Fighter without rules Aleksander Emelianenko - the tattooed Russian athlete . His body - a small art gallery. And rather peculiar . His views of Alexander perplexed entire criminal world .
"It's that - a thief in the law? And why do we do about it then do not? "- Look around for the soldier" very influential people . " The fact that professional criminals tattoos - it's like an identity card. On them are devoted to define all the " nice way " person. So on the body Emelianenko along with a pair of trendy salon tattoos - a lot of criminal cases. And again, very eloquent . The impression is that the athlete has made several walker on the area . However, in the latest issue of "MK" Sunday , "Alexander Emelianenko speculation about his criminal past has denied . He said that he does not know what is the significance of his tattoos . And he did them only with the sole intent - that was terrible and terrifying enemies affected . Strange argument . After Alexander's opponents mostly foreigners , Russian thieves do not understand the symbolism . It looks like something a fighter does not finish . Therefore, the " MK" in St. Petersburg "has decided to seek the advice of a specialist. Decipher the hidden meaning of tattoos on the body of Alexander Emelianenko agreed Sergei Morozov, an operative who has worked for many years in Russian prisons and regions.
1) and 3 ) Thieves star and spider web
According to a former opera house, the first thing that immediately caught his eye when he saw Emelianenko - is characteristic of thieves stars. And they are not marked on the amateurish , and in the " right places ." On the body Emelianenko four star - two behind the knees and the two just below the shoulders . First on the thieves' language mean " I do not put on your knees ." The latter also impaled on all thieves rules - not on his shoulders , and a little lower. Because the stars on his shoulders - this is the shoulder straps . And no self-respecting Urca will not poke at this point , " Cop character ." But instead of chasing the athlete on the shoulders of another distinct character - thieves web, symbolizing the prison bars .
" Will you go for the truth , to erase the ass "
Inscriptions on the feet - a typical criminal lotion . It is surprising that at the feet of Alexander Emelianenko there is this phrase, but , for example, not the other , is also quite common - " cop tread on the throat ."
1) Church domes
It's simple . The number of domes is the number of prior convictions , and the number of windows in the church - the term . If you believe the tattoo, Emelianenko was tried twice - for three years , and year. I wonder why? The answer to this question can give other tattoos .
) Pirate
Very common in the not too distant places tattooed , informs that its owner fiercely hated prison asset and has a tendency to hooliganism and robbery .
dagger
Also the symbol for the robber. And besides, he expresses dislike for cops , prosecutors and judges.
Grave cross
Be sure not to apply itself , and just as Alexander Emelianenko - as part of " an artistic composition ." Indicates that during his sentence prisoner died from someone close .
5) The Executioner
Again, according to the canons of zonovskoy portrayed exactly as Alexander Emelianenko - always with an ax and a hood thrown over his head . This figure athlete reported knowing people that he wants revenge . And besides , it is recognized that reveres the law of thieves .
«Gott mit uns»
Common in the criminal world undergarments saying . Translated from the German - " God is with us ." This phrase was the motto of the SS. The criminals inject it along with the swastika , thereby indicating his hatred for the government.
4) "Give youth a return ticket, I already paid for the road "
Very popular aphorism in juvenile detention .
A child in the crown
Another sign saying that the holder of such a tattoo sitting in a labor colony for juveniles .
- If you do not know about the sport merit of Alexander Emelianenko , but simply to examine tattoos on his body , I would have concluded that this person has two previous convictions - sums up his observations Sergei Morozov . - Most likely, for hooliganism and robbery. And in his early youth . It is " on the youngster " felt most strongly thieves romance . It was there that often makes a contingent of prison tattoos . However, then , freed and matured, many of these regret of Arts - do not go to the beach , do not undress. And to reduce the torment . Therefore, the majority tries to kill zonovskoy what some other tattoo - tattoo because now all the rage. There are a couple of "peace" and the patterns on the body of Alexander Emelianenko. In general, the tattoos on his body - a typical criminal . I will never believe that this person does not understand their meaning.
ZombiedKoreanTurnipHead October 26, 2013, 10:51am #2

Another unreadable article from Touch haha.

Another unreadable article from Touch haha.

I can try to explain what is the most unreadable

"Will you go for the truth to erase the ass"

"According to a former opera house"

Well, I can't argue with that. Former opera houses know their shit when it comes Russian criminal underworld tattoos.

"Will you go for the truth to erase the ass"

Steve4192 - "According to a former opera house"

Well, I can't argue with that. Former opera houses know their shit when it comes Russian criminal underworld tattoos.

It means "according to former law enforcement executive" lol

Thanks touch. Words to live by.