Mike Tyson is the icon most closely associated with power. Mention Tyson and the first thing that comes to mind is “knockout” due to his 44KO’s. It’s the way Tyson delivered the shot. His delivery was insane to watch and even to this very day nobody has been able to produce the amount of power Iron Mike showcased.

In the 80s Tyson ruled the world he was a destroyer of the likes nobody had ever witnessed. MMA begins after the prime of Iron Mike and when it begins Mike Tyson is making too much money boxing. Too much to even consider a mixed martial arts career.

The early days of MMA are filled with monsters but the skill set is more diverse and boxing doesn’t become the only way to win. Throwing too much power in MMA opens fighters up to the take down and that is not something they want to risk. To make a long story short many years pass and the world never sees another Tyson. In boxing another Mike is never born and in MMA there is no such thing as a fighter that throws all the might into their punches and lands knockouts on the level of a Tyson. The only man who even deserves to be compared to the “Baddest Man on the Planet” is the current baddest man, Francis Ngannou.

Ngannou is a destroyer who relies on his fists to do his destruction. A massive man, a physical beast Ngannou delivers destructive nasty knockouts that will make any witnesses eyes bulge out of their sockets. His power is without a doubt unbelievable but is he a Mike Tyson or is he as close to it gets when looking for a reincarnation of the “Dynamite Kid”. 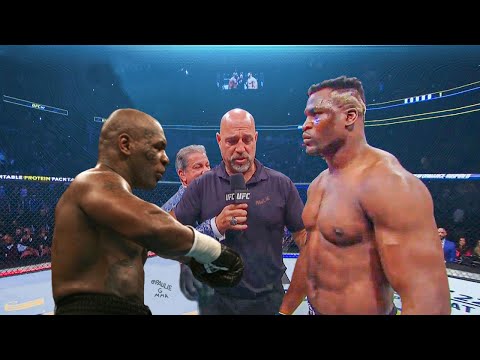 Ngannou is without a doubt top level and his power is incredible unique in that it destroys. Tyson was born into trauma which fueled his anger and rage. Arrested numerous times as a kid, so many that I do not want to say left Tyson at a crossroads. He could either hone in on his athletic abilities which were obvious or go to jail. Francis who came from humble beginnings does not have the demeanor of a young Tyson. He never did, his physical attributes outweigh his need to dig deep down into his soul to pull out his inner beast. Mike Tyson had something that can’t be reproduced. His life was legendary and because of his troubles he gave up his childhood in order to train. Sent to the Catskill Mountains in upstate New York Tyson met Cus who became his new father. A torn boy Tyson lived with high calibur up and coming boxers and during those snowy winters Cus and young Mike honed in on what would become the most amazing destroyer the world had and will ever see. Capped by his 1986 win of the WBC title Mike became the youngest man to ever win the heavyweight title. A natural, a phenom Mike Tyson had skills that are on a level no man can achieve, genetically created to destroy the prime form of Tyson is something that will go down as a Myth because Tyson’s skills were given to him by god.

In a battle between the prime 1986 Iron Mike Tyson and the Francis Ngannou we see today who slammed Stipe Miocic in the rematch bending him backwards like a folded lawn chair or his eye popping knockout of Alistair Overeem, which man would you favor? In a fight with no rules the most pure form of combat, Mike Tyson at 20 years old vs Francis Ngannou at 35 years old which man would win?