Could Ngannou sit out until 2023 if held to the champion’s clause and a new deal doesn’t come? 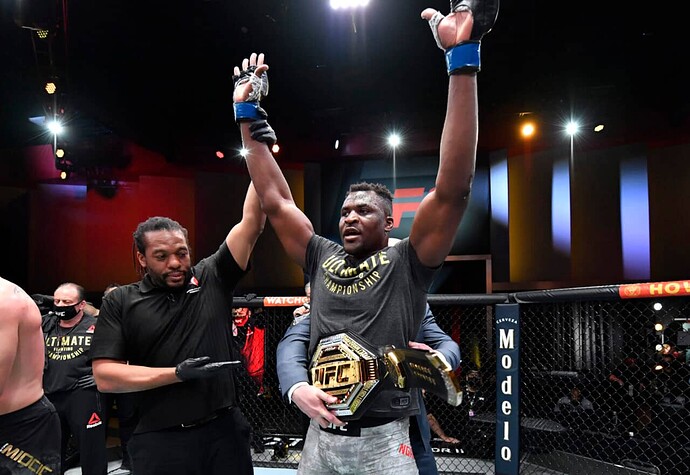 Francis Ngannou could wait out champion's clause until 2023 if a new UFC deal...

Francis Ngannou seems to be willing to sit out the rest of the year instead of fight again under his current terms.

Francis is turning into a huge headache for the UFC. In a way it’s karma for how they did Stipe.

He’ll lose the title and with it all bargaining power making him wish he took an earlier deal.

The wording of the article is unclear.

““The Predator” claims the terms of the clause call for him to either fight three more times as champion or remain signed with UFC for another year.”

So he fights within one year does that timeframe reset? Or can he fight one fight, win it, and still be done after the year? Because a Forbes article referencing the 3 fights/1 year says “whichever comes first”.

Part of me wants the UFC to say “fuck em” and move on without him. The bigger part of me wants to see fighters paid more. But, Ngannou doesn’t seem to be in it for fighters, he seems in it for himself only. He is not nearly good enough to be pulling shit like this. So, fuck em imo.

How did they do Stipe?

I wonder if his tune will change when round 3 three comes against Gane and that oh shit I haven’t put him away like usual and I’m very tired moment hits.

How did they do Stipe?

They promoted Frances but not Stipe both times for one. They didnt promote Stipe at ALL. They made him wait a long ass time for a rematch even tho he had a great streak going but give others rematches they in no way deserved.

UFC never did Stipe right as the hw champ.

He has a great highlight reel and fought all kinds of killers. Hes a Fireman ffs. Immigrant family altho clearly the wrong color.

Stipe should have been a household name.

Am I the only one who thinks the current UFC heavyweight roster is lame? Just a bunch of sluggers is all I see. Is there any skill up there are Heavyweight right now, or just heavy punchers?

Am I the only one who thinks the current UFC heavyweight roster is lame? Just a bunch of sluggers is all I see. Is there any skill up there are Heavyweight right now, or just heavy punchers

Stipe really is the most skilled but he has been in wars and cant be too far from falling apart.

Its a weak ass division for sure. Brendan Sclub could come back and be top 10 easily.

He’s getting dick stomped by Gane’s so who really cares. Once he looses watch that fight he wants with Fury go up in flames too.

Is there any skill up there are Heavyweight right now, or just heavy punchers?

There’s never been a lot of skill in HW. You could drop any HW from any era into the modern UFC and they’d look about the same.

They offered the dumbass a big $ deal but it didn’t give him an option to box. So fuck him.

The UFC has shown they use the contracts to their advantage so why shouldn’t a fighter?

If a fighter declines a fight the UFC can use that to extend the contract and they have done this in the past with poor offers just to keep a fighter under contract because they know the fighter would decline the fight.

I’m not saying that Francis is in the right here but he at least is doing the exact same thing that the UFC does, using his contract to his advantage.

At least Francis is fighting and by doing this he ends his contract but at least he has fulfilled it.

Too many times we see people refusing to fight out a contract and Francis is at least fighting it out.

If he wins, then the UFC has to figure out what they want to do to retain him because they might just try the “didn’t accept fights” clause to try and extend the contract if they can but I suspect that the way it’s worded allows Francis to sit out and avoid that.

This fight will be huge for many reasons, not just for the belt.

Bro Stipe has a speech impediment that makes him impossible to understand. Its hard for the UFC to do shit with that.

They could easily strip him if he keeps fucking about. It’s a shame cause I like watching him fight

They could easily strip him if he keeps fucking about. It’s a shame cause I like watching him fight

If he wins the UFC would find a way to get a deal done, imo.

To strip the sitting champ would look really bad. If it was over a year then, yes.

I mean really the best case for Francis to make big money would be losing this fight against Gane. If he wins you know the UFC isn’t going to let him walk. They’ll tie him up for as long as possible.

Ideally if he loses on the ground he can still play it off as shit happens in MMA and he wouldn’t lose any stock going into boxing. I’d almost like to see him throw the fight just as a FU to Dana and company but that would also piss off a lot of fans and make a promotion think twice about dealing with him.

I disagree. He was already set to get paid big time by the UFC, had agreed in principle on the $ but wouldn’t budge on the boxing demand.

If he wins the UFC finds a way to make the fight happen with Fury in 4oz gloves.