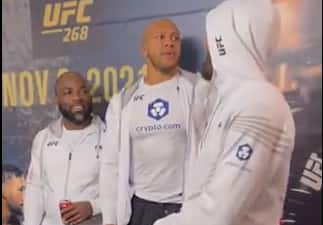 Francis Ngannou snubbing former teammate, and upcoming opponent, Ciryl Gane backstage at UFC 268 was a decision based completely on bad blood between "The

Why the Francis hate? Thought you loved the physical attributes of MMA fighters first and skills second lol

Lol ever since he became champ he’s done nothing but complain. He wants more money. He wants toe able to box too but mad cause his contract obviously won’t let him…. Like dude stfu and fight

I’d love to see him box, only wilder though, it’s a fun fight with 2 guys that have crazy KO power. It’s possible Francis “could” land that bomb as wilder is not the best boxer, he is just like Francis in that their power made them champs with minimal skill, but that said Wilder is still a much better boxer than Francis ever will be and I’d bet he lands his bombs first

Either way that’s the only fight in boxing I’d like to see Francis have, against Fury he would embarrass himself