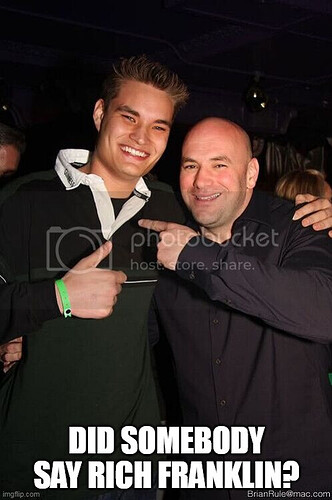 It was a huge shock to see a fight with my first time watching him. He didn’t look like an asshole or a fighter. This fella looked and had the personality of a guy that didn’t dislike anyone.

Him/Tito/chuck/Hughes are my go to era

I knew Rich well, but we haven’t spoken in about 5 years. I have no idea how One is going, but if it fails, it won’t be because of him.

Is rich still working for ONE ? How’s everything going for him, does anyone know him?

Yep, he’s still the vice president of one. They are planning on bringing One to the states here soon, and what better ambassador of the sport could you have than Rich Franklin.

That was my golden era. Every event seemed like a big deal and i knew every fighter. Im watching a fight night as i type this and i know 6 of the fighters on the card

Lol seeing this post just reminded me one’s on. Looked at the lineup…. I’ll probably just do something else.

That, and Rich isnt a complete piece of trash like the actor fag is.

It would be interesting

If he fought in an exhibition against another retired guy from his era, that would be cool. Rich was clearly past his prime when he retired but his skill didn’t fall off a cliff like most others during his time, he still looked good in his last few fights.

I always liked Rich. I always wanted to see him and Chuck fight and even though they finally did and he ko him I still wish they could have fought years before that in their primes.

Always thought this every time he fought, just figured one of his sparring partners targeted that eye

Rich “Thanks Coach I thought I was Missing something”

Was he a classy guy, through and through?

Damn I wish I new him

I’ve talked about it on this forum before, but I started training with Rick in 2000 when I was 20 years old.

I have some great stories of just starting out with him.

He is one of the finest gentlemen I’ve ever met.

In all honesty the poster here (forget your name, atm) that has him as their profile picture always makes me think I’m talking to rich and the personality is always

I believe he is the one I was telling some stories to last time I talked about Rich.

Why can’t JOSEPH ROGAN HAVE RICH ON?!?!

Appreciate it guys. Rich is the man. Definitely my all time favorite fighter. That being said I have no desire to see him fight. Still looks like he’s in great shape.