You have probably watched street fights online, maybe seen a few for real too. Those virtually always unfold in the same way: It’s painful to watch if you know what you’re doing, as they are messy, with technique near non-existent. The following altercation, though, is different … never bully The MMA Kid.

A kid wearing a black t-shirt can be seen walking towards a kid in red and shoving him, twice. The fact that the kid in black asked his friends to record the altercation beforehand clearly shows that it’s a bullying situation. Unfortunately for the bully, the kid in the red t-shirt is having none of this. 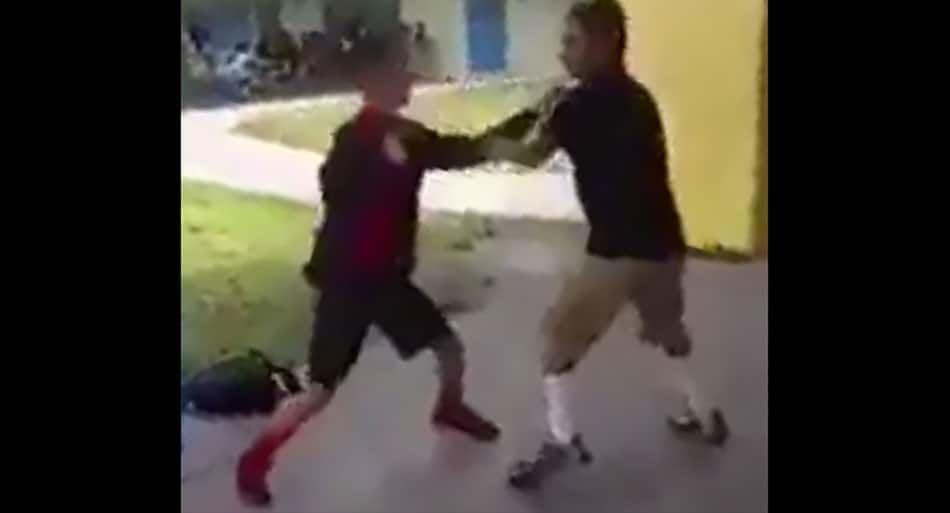 The two square off, and the kid in red throws a straight right hand that connects and follows up with a textbook switch head kick that lands, too. The sequence that follows is INSANE…
The MMA-trained kid lands a straight, takes the bully down with a body-lock/scissor sweep combo, and mounts him. He then unleashes a BARRAGE of hard punches that stun the bully, before taking his back and going for a neat, beautiful armbar! All of that in mere seconds!

The bully doesn’t tap but can’t move either; he’s done. The altercation is eventually broken up by two nearby kids.

The student, a 12-year-old, was a member of the kids competition team at Miami WMB Training Center under brilliant, brilliant coach Javill Byron. The bullying had been going on for an extended period of time. The coach had been informed about the bullying beforehand, and trains his students in how to deal with it, as he detailed in an interview with Ruben Alvarez for We Love BJJ:

That is exactly what the young man did. He got his back against the wall so no one could attack him from behind, and then went home and told his parents, who told his coach.

While the coach was not proud that his student was forced to fight, he was proud at the restraint he showed, holding the aggressor with the armbar, but not breaking the limb, which could have happened in a split second.