Storley vs MVP for int. title plus the Chimaev and Luque fights coming up

Everyone can’t wait for the Chimaev Burns fight but WW has a lot to offer in April and May beyond that.

Amosov is fighting in Ukraine so Bellator has booked MVP Storley for an int. title in May.

On that same card is Lima vs Jackson and Koreshkov vs Daley.

When are they talking about doing Usman vs Edwards? UFC has Pereira vs Ponzinibbio, Brown vs Williams and Roberts vs Trinaldo booked for May at WW.

Of course Chimaev vs Burns is next weekend and the following weekend is Luque vs Muhammad.

I’m sure soon PFL will announce their May Regular Season WW fights as well that will include Ray Cooper, MacDonald, Magomedkerimov, Zeferino, Tibau etc…

It’s such a waste that MVP never made it to the UFC. He’ll never get the respect that he deserves. He completely embarassed his opponents and to those who keep saying he fights shit competition: There is no better competition in Bellator, he fought everyone there is to fight in Bellator besides Robbie. (who he would beat imo) Now he’s 35

He would struggle to crack the top 10 in tbe UFC.

I don’t think MVP has fought everyone, everyone but I know what you mean. He has fought Lima 2x, Daley and Derek Anderson but 20-1 MVP challenging 26-0 Amosov for the title was gonna be a huge fight for MVP and the promotion.

Its always a problem in Bellator with their dominant fighters that they run out of fresh compelling opponents so you get Bader vs Kongo II, Pitbull vs Straus IV, Lima vs Koreshkov III etc… more often than if they had a deeper talent pool like the UFC.

You have less options for highly ranked fighters fighting each other outside the UFC so I always hate when the best can’t compete with the best because of promoters restrictions.

Jason Jackson, Neiman Gracie, Koreshkov are still around to fight and at least he is having this int. title fight vs Storley now.

Here are the first WW fights for PFL… as expected Copper III, Magomedkerimov, Rory, Tibau and Zeferino are in the field. 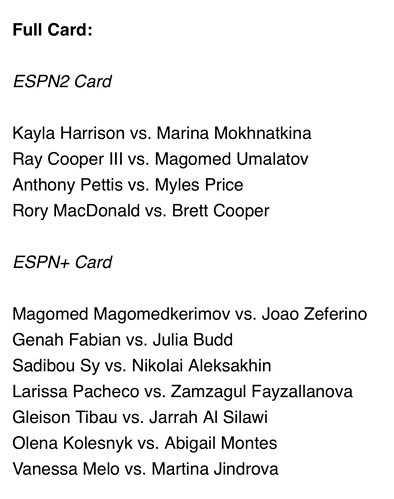 He fought who there was to fight, can’t fault him for that.

That said, he has the Anderson Silva thing going where for most of his career he somehow avoided fighting a smothering top-control wrestler (again, not his fault, but that’s one of the archetypes you have to beat in most careers if you want to be champ).

If he beat Storley (who I think is fucking super legit), then I will really deeply rue the fact that we never got to see him in the ufc.

I’m not a big PFL fan to be honest but I like that WW field a lot. Most of all I want to see Cooper vs Magomedkerimov III… preferably in the finals.

Umalatov is 11-0 with lots of KOs.
Zeferino is on a 5 fight win streak and only withdrew due to injury last season.
Al Silawi is 17-3 in MMA and Aleksakhin is 24-6.
Rory and Tibau are the definition of tough vets.

Welp a lot of these fight fell through. A lot.
Chimaev won
Muhammad won.
Cooper got upset.
The Canadian Psycho is back.

MVP vs Storley is now.

Awww shit thanks for reminding me about the pfl card tonight. Who the fucks going to make the thread of pfl glory Tonight?

Where you at HKP…I bow to your posting of threads here on the UG least we can do seeing how much you contribute.

Damn nevermind lol no pfl. I could of sworn I saw someone post Bout it bkfc it is I guess.

MVP has some exciting standup but he is a limited specialist but of course very dangerous.

MVP has some exciting standup but he is a limited specialist but of course very dangerous.

MVP’s standup is dangerous, but I was impressed by his takedown defense. Storley had to really work (for minutes) to get MVP on the ground and then Storley wasn’t able to do any damage. I was actually impressed by MVP. I was also impressed by Storley’s ability to avoid a KO shot.

His takedown defense was impressive yesterday and its never looked better… I was just saying being such a long creative striker like that, he was always gonna have problems with guys like Storley so keep him away from then so he can get built up and thats what they did.

I’ve been a die hard mma fan since UFC 2. The older I get, the more I would score this fight as a win for Page. He won the standup in every round and then Storley just pinned him against the cage working mostly unsuccessfully for takedowns, rarely landing anything that matched Page’s damaging blows earlier in the round.

I googled the striking stats for that fight and don’t see any posted in an easy to find place. Storley landed almost nothing standing and landing very few meaningful shots against the cage or on the ground as well.

I do think takedowns that don’t lead to effective strikes from good positions or submission attempts are sometimes rewarded way too much.

I can see why you say MVP won that fight.

I can’t trust punch stats anyway, I forget which fight it was but recently saw one I think in the PFL where one dude beat the guy standing, landed the only shots, took the other guy down right away, destroyed him on the ground and the punch stats were about even. They counted every open hand tap to the guys side by the losing fighter who was on his back. I had to go back and rewatch to see how they even have the loser a singly strike. It’s very flawed.

Yeah I don’t really look at them besides when show during a broadcast but was just wondering about this fight. I was not actively watching the Storley fight that closely but I just don’t remember him landing hardly anything at all. 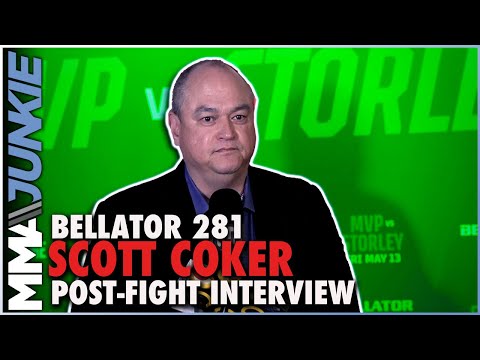 Yeah did you read Cokers interview? He basically said the same thing and a question I asked during the fight. Is half or more of a Rd striking worth more in the judges eyes than man hugging and not doing any damage the remainder of the rounds? Idk if you go by modern MMA scoring you’d have to give it to LS but to your long time fan of the sport you might have to give it to the guy who did the most damage, ala pride rules. Damn certain he would of got a couple yellow cards aye lol

Lay and pray merchants are bad for the sport.