Thoughts on Nick Diaz's first stare down in six years? 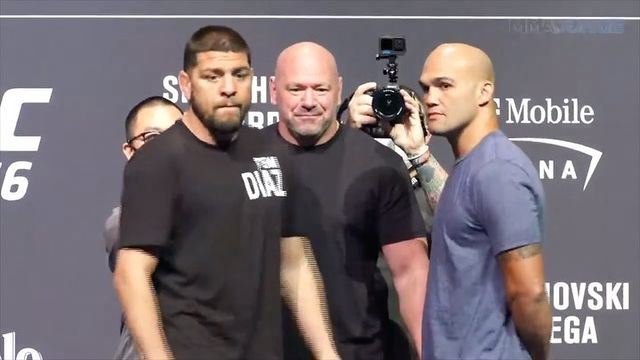 He looks a tad out of shape

He looks a tad out of shape

I hope Robbie finishes him clean for the weight change screwjob.

Robbie has a chip on his shoulder. You can tell. He’s been ufc champ and been in all out wars knocking people out senseless while Nick was out partying for 6 years. I think Robbie butchers Nick. It won’t be pretty.

It’s the heaviest we have ever seen him. Even clubbing or in the gym over the last 5 years he looked in shape.

I wouldn’t be surprised if this is the heaviest he has ever been.

For an average Joe he looks fine, but those Love handles look like they bother him.

Robbie still has the look of a predator in his eyes. Diaz not so much.

As durable as the Diaz bros are I think Robbie makes it fast and ugly.

My thoughts on the staredown?

It’s meaningless. We have seen countless threads over the years where a psychoanalyst wannabe proclaims that this fighter is “shook” or bet the farm on that guy because he’s oozing confidence. And then the complete opposite happens in the cage.

Bloated unhappy out of shape and hoping it’s not from an injury. When has Nick ever looked out of shape? His insta photos don’t suggest he would come in looking bloated and this much out of shape and with Thompson saying I hope he’s OK makes me think he saw an injury happen or he looked as if he had one.

In the video he claims to have seen anyway.

Lawler takes this one.

How many of those instances included a six year layoff…? 1 at most…?

This…and Nick is always awkward in stare downs. It’s been pretty widely reported that he has anxiety issues and doesn’t like the press conferences and other stuff for the cameras. Nick looked awkward, but he always does…won’t impact the fight in the least, and I have no clue what happens in the fight.

Robbie hasn’t looked great, Nick has been inactive…we’ll find out tomorrow which guy has slipped the least from their prime, and IMO this fight proves absolutely nothing in terms of who was the best fighter in their prime. Neither guy is there anymore. It should be fun, though.

I’m sure none of them. But Nick is a notorious head case. Like anyone here can really figure out how he’s gonna perform tomorrow night based on his body language from the staredown? It’s guesswork.

I’m going by the recent pics on his insta of him looking great. Didn’t look so great at the face off. Looked very uncomfortable even for Diaz. Also him saying that even if Robbie beats the piss out of him he’s going to fight again. Sounds like an injury to me. He looked like shit tho

Nick is one of the few fighters who likely hasn’t touched any PEDs. He’s also been partying for years now, and is 38 years old. I don’t think people are being realistic about his appearance and if anything, given the aforementioned he looks pretty good.

The Diaz brothers are never in a fight until they’re actually in a fight. They have a unique ability to rise to the occasion. Even when they don’t win the fight, they find a way to stay in it and make it interesting.

Both brothers have never been great at all the media hoopla. I remember Nate getting embarrassed on some financial TV interview with Conor, and then choking his ass out the next night.

All that being said, you can’t fight Father Time, and Nick hasn’t been an active fighter. He was at his best when he was fighting consistently.

I hope Nick turns it on when it counts, but I do think this might be a step too far for him.

Not to mention Lawler’s subpar performances in his last two fights (vs. Magny and Covington). Robbie is a legend, but he’s an old and worn 39.