What say you forum mob? Agree with my top 10 and WHY? disagree? Let’s hear it. 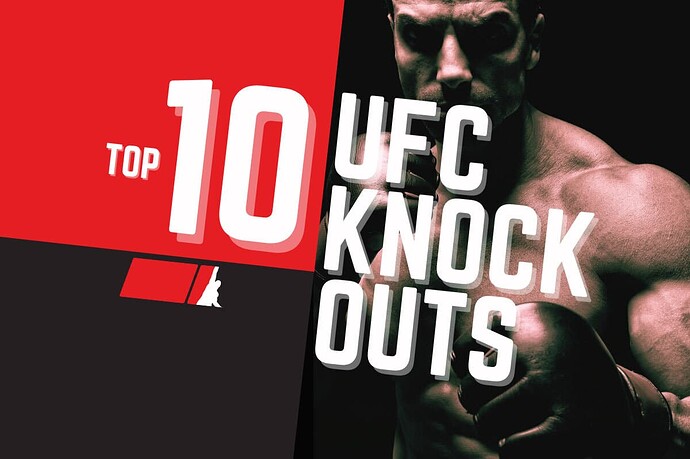 The UFC has had so many memorable knockouts, but in this top 10, we look at the UFC knockouts that shocked and in some cases changed the entire industry.

Not a bad list. In my mind Anderson, Henderson and Nunes Ko’s should be ranked higher. The Buckley KO should be on every top ten list in IMO.

Some I expected to see were:

It depends on what the criteria is. There have been so many amazing knockouts it’s all subjective.

Some I expected to see were:

It depends on what the criteria is. There have been so many amazing knockouts it’s all subjective.

Tank and Nelmark and Gary Goodridge vs. Herrera and Yair vs TKZ are automatics.

Any list without the Buckley spinning back kick KO is a fail.

Drop the Cyborg KO and throw in more leg kick KO`s that are more devastating like Barbosa vs Etim.

I agree. Nunes KOing cyborg was impressive because cyborg was pretty much unbeaten but if I remember it was just an overhand right thrown normally, nothing special about the KO in and of itself.

Usman-Masvidal doesn’t belong on the list. Having it in the top 5 is retarded (over Henderson/Bisping lol).

It’s not even the best knockout this year.

I agree.Masvidal`s flying knee KO vs Askren is more devastating.

We need brutal KO`s where guys are out cold,not a flash KO or TKO.

One I couldn’t believe was left off the list: Tank Nelmark. That was THEE first holy shit moment. I thought Tank broke his neck. It was super violent.

There’s a lot of recency bias entries in the list, too. #10, Ngannou vs Overeem. What was significant about this KO? #5 Kamaru vs Masvidal. Why? Why not Masvidal vs Askren? Not arguing these two… just pointing out, both were flashy, hard KO’s… but neither had any significance aside from “beginning of the end for Askren”. #2 Cormier vs Stipe, WHY?

In contrast, let me point out the significance of some of the other points:

#9 Hendo Bisping: never before had someone talked so much shit and got put down so hard on the biggest of big stages, UFC 100. This is my #1 KO.

#8 Gonzaga vs CroCop: while CroCop had been KO’ed hard before (Randleman), this was the first time where he looked vulnerable. It was the end of the “left leg cemetary” era.

#7 Silva Belfort: who knew you could KO someone with the crane kick from Karate Kid? Apparently Anderson knew…

#6 Nunes Cyborg: Nunes ended the Cyborg/Terminator era, ending one of the longest running trashy/bully/PED streaks ever in the sport. Nunes deserves to be on MMA’s Mt Rushmore for that KO.

#4 Shogun Machida: the first fight was a heartbreaking judge bullshit moment. The KO allowed Shogun to right all the wrongs in the MMA world in definitive fashion.

#1 Conor vs Aldo: flatlined the P4P #1 guy at the time who had looked invincible before that.

So having said that, some others that I expected to see on the list.

Anderson vs Rich 1: one of the OTHER first holy shit moments
Chuck vs Rampage in the UFC: end of the Chuck era
Jones vs DC 2: the two greatest fighters of all time, at their peaks, super violent ending
Fedor vs Arlovski: cross promotion, “our best vs their best”… and epic KO, turn of events (Andrei was winning the boxing leading up to the KO)
Fedor vs Bigfoot/Hendo: end of the Fedor era… put the stamp on what Werdum started
Wand vs Hendo: Wand was a LEGENDARY NIGHTMARE. The AXE MURDERER. People were terrified to fight him. Hendo took the title, hard KO’ed the man and made him look human.

Edit: great list OP. It’s a pretty good list on it’s own, but it’s also a great starting point for conversation which is an understated and underappreciated thing.

Chuck vs Rampage in the UFC: end of the Chuck era

Might have been a end of an era but Chuck was just on queer street.Chuck vs Rashad Evans & Chuck was flatlined and out cold.

Baroni Menne was class. I remember watching it on YouTube with my little brother calling it ‘speedbag face’

Tank/Nelmark. This should not only be top 10, but fighting for #1

For my 2c, I’d put:
Lawler/Trigg, or Lawler/Rory M, just for the sheer violence that was Robbie Lawler.
Evans/Liddel, the beginning of the Chuck L kayo streak.

Yes, I would have put Evans/Liddel on this list. It was a LH sea change.

Brad Kohlar blasting Judson, Edson Barboza spinning heel kicking Etim to another dimension, and Rashad changing the course of Chocolate Al’s career (along with a bunch of other great ones) all say this list is flawed.

Wait…this was on the front page and it’s from six months ago? Oh geez…is traffic down that much that OP is trying to get everyone to complain about this list again? And I fell for it?? Yeesh.

Barboza knocking out Etim is still #1

It’s a good list, would’ve like to see masvidal/askren and hall/cella, but there’s so many great knockouts licking 10 is tough. I think holm/rousey is number 1. The men knock each out all the time and rousey was supposed to be this unbeatable juggernaut, the way holly picked her apart and finished her was incredible.