Weapons: USA vs. Israel in a Shock Knife fight for the USC

As mixed martial arts fans, we are accustomed to exponents of unarmed styles such as Karate, Muay Thai, Wrestling, BJJ, fighting to see which style will come out on top. But have you ever wondered what would happen if we took men and women from various military units around the world, and pitted them against each other in one on one contest?

The History channel made this concept a reality with The Ultimate Soldier Challenge, and in this particular episode, we get to see a US Army 82nd Airborne soldier take on an Israeli Defence Force (IDA) soldier, in a one-on-one knife fight.

For obvious reasons, the two combatants aren’t able to safely use live blades in this contest, so they are equipped by the next best thing - a Shock Knife.

For those unfamiliar, a Shock Knife is a composite training knife that is used by law enforcement, corrections, and military personnel; it carries a small battery pack to generate an electric shock upon contact to help induce a fight or flight response, and let the users know if this was a real fight, there would be blood.

With the contest underway, the stakes are high at this point of the episode. If the Airborne representative wins, his team moves onto the next round, but if the IDF soldier wins, they will call a sudden death round with the winner of that moving onto the next round.

Who do you think will be the Ultimate Knife fighter? 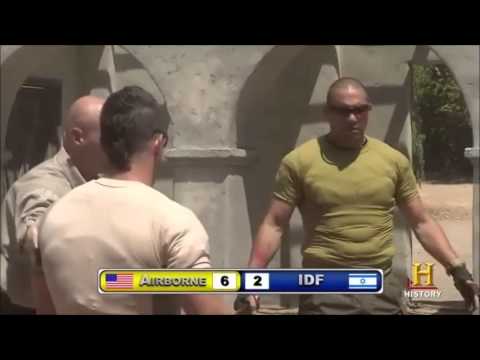 The Ultimate Soldier Challenge is a television show that aired on the History channel that matches US Special Op units against the most elite forces from around the world in a head-to-head competition that is based on real-life missions that’s a showdown of strength, smarts, and strategy. The show aired for one season. Episodes are available to watch via Amazon Video. [source: history.co.uk]