Rousey #1? This is the MMA equivalent of casting Amy Schumer as Barbie.

I'd say right now #1 is Belarusian kickboxer who is currently training at Blackzillians for her MMA debut, Katya Kavaleva, who stands at an amazing 6'5", and is as good looking as she is tall.


Gina Carano has been out of the game for a long time, but if she can still be counted I'd give her a high rating. She could easily be #1 or #2.

Next on my list would probably be Meisha Tate.

Then I'd go with Jessymn Duke.

After this, it's hard to say. A few that come to mind are Holly Holm, Ronda Rousey, and Paige Van Zant.

Holly and Ronda get knocked by some people on here, but I bet most of those same guys who not turn either of them down if they hand the chance.

Oh, I forgot to mention, I liked Erin Toughill back in the day. Somebody posted some pictures more recent pictures of her not too long ago and she still looks pretty good to me.

Never forget that Ronda was actually fairly attractive at one point a while back.

I think of "hot" and "sexy" being similar adjectives (the type of girl you wanna stick your dick in on sight, or rush to the nearest bathroom to hammer one out so seeing her doesn't ruin your day).  There's plenty of those in WMMA, especially if you include the minor league companies (Meisha, Claudia and Karate Hottie are at the top of my list).  But no one, NO ONE, puts it all together (sex appeal, cuteness, charm and confidence) like my boo Joanna Jedrzejczyk.

So even though this thread is asking specifically about the hottest I'll just say Joanna cuz I totes lub her guyz.

Dude, anyone who has Ronda over Gina doesnt know shit. Video is creep

Hottest female fighter?  Easy.  The gem from Curitiba.  Hands down, dick up.


ERin Toughill is an intriguing beauty

somebody mentioned Jessamyn Duke, no give me a break not in their league

my pick for hottest female fighter is Kery Vera. She had a strong two fights, defeating leslie smith and destroying Kim Couture.  Kery was seen on the Fight Girls reality show in 2007. Very intelligent n comfortable in interviews...married to Brandon Vera.  one article i remember from the period asked if she was to be the next Gina carano. Gina's career ended in 2009.  Kery's two fights were that same year.

however, injuries stopped her, and she hasn't come back.  >=-I 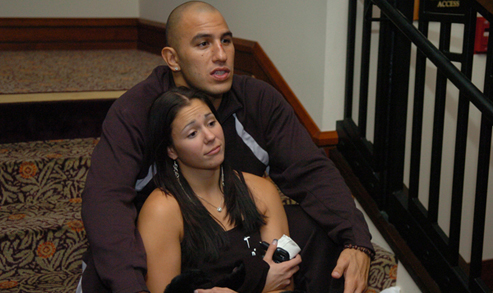 Dat last pic lol...looks like they're watching a romantic movie, she's melting n ready to be fucked on the stairs n he has no fucking idea.