How does that fight go? Who wins? Legit curious to see everyone’s opinions on this.

Going against the grain, I think ND wins. Matt can’t knock him out, probably won’t be able to do too much on the ground against him.

Nick has lost to far less wrestlers because he couldnt stop takedowns.

Matt in his prime was a monster

Sherk, riggs, deigo… all lesser wrestlers than Matt. All were able to take nick down and win decisions.

Prime Nick Diaz is the better fighter and had the better skill set. He had a better run here than Matt ever had in his career.

Matt will take Nick down but guess what? He ain’t submitting Nick. Nick would either submit Matt as BJP did or he would wait till Matt is tired in the later rounds then TKO him

Diego, Joe Riggs, Sean Sherk… all took nick down and beat him up and won fights when he was in the UFC. 3 fights in a row. All 3 were far lesser fighters than Hughes.

I’m a fan of nick. But hes always struggled with wrestlers. It’s very fanboyish to choose to ignore that.

It’s ok Floppy. We’re still on the same side on the Francis/Fury thread at least

You’re so full of it

Ok… I guess as long as we completely ignore the fact that nick lost to every single good wrestler he ever faced… then yeah he might have a chance.

The thread title says Prime Nick Diaz. Nick Diaz’s prime was 2007-2011 I’d say? The only wrestler he lost to in that time was GSP. There’s no shame in losing to GSP lol

I’m gonna have to agree that ND is a more complete mixed martial artist. It’s not always about that though. When you have two guys at that level I think whoever has the better game plan and sticks to it. Hughes could easily wrestle fuck him but Diaz could tko just as well. I could be way fuckin off tho too. Not like we will ever know lol
I go with ND but not cause of skill but just because Hughes is a dirtbag human being.
Anyone ever met him before the accident?
I did on two separate occasions. He was my favorite fighter until the first time I met him.

Lol. I’d like to hear more on this. What was he douchey about? 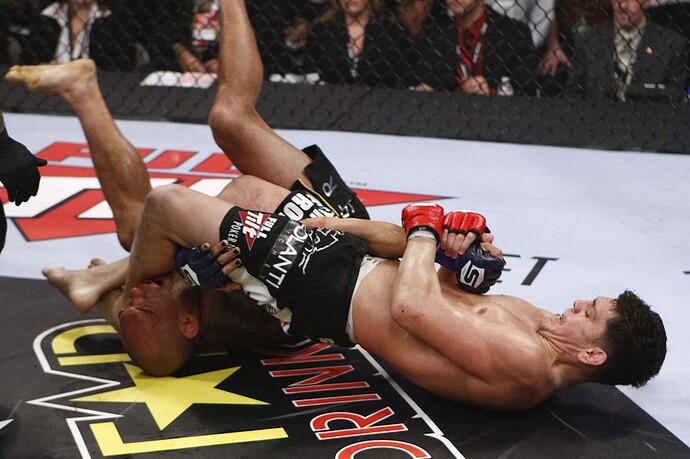 I feel like people don’t respect Nick’s BJJ for some reason. Assuming this is a 5 round fight I think it’s MORE than plausible Nick submits him

Diaz is the terminator. He doesn’t get tired and you simply cannot knock him out

^ another one of my all time favorite fights btw. Nick ate like 2 dozen leg kicks and kept moving forward like it was nothing. He is the god damn terminator