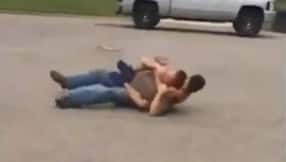 Check out a street fight where a flyweight teenager clowns a heavyweight sized adult man.

Lol, that was honestly more entertaining than about 95% of all UFC fights.

Little kid getting slammed by the big dude, unfazed. Big dude got chocked out then smacked in the head repeatedly while out, pops right back up, unfazed. Think the little dude got a little demoralised when he saw he was up against an unstoppable force.

One more round and I think old boy would have taken it. Great fight, two warriors.

So who had the time to weigh this man to know he is barely the size of a flyweight. My sons smaller then him n weighs 140 pounds lol

Amazing that people think that tapping out absolves you of the situation you have put yourself in.

If it’s a street fight as far as I am concerned you’re going out and that’s that, and it’s up to me to stop after I am done with you.

I think the kid actually woke the guy up with strikes when he let go, and the kid also took those drops like a champ.

He also started to give the guy some shots a la Keith Hackney when the guy started to get up and I would suggest he not use his arms but rather a soccer style kick instead.

As you can see the guy getting up did not respect he got owned and that is why you don’t let up until they are unconscious.

Kid throws first punch and then whales on buddy’s head after seeming to choke him unconscious. Then expects other guy to shake his hand afterwards. Ha!

@J_Burgos, you sure have been in the right place at the right time to film all of these street altercations lately. Please try to frame the encounters a little better in the future. Steady hand with the phone, Jason. Steady hand!

Old video is old. Must be a slow news day to make the UG front page.

Wtf? Hahaa how is this front page news? This happened soooo long ago. And the “kid” is actually a pretty sick fighter. Dude travels all over the place and trains. Even trains with Diaz bros. I’ve trained with him a ton. He’s fast like a little lizard and never stops.

What’s with all the old fight videos making it to the front page lately? There was one yesterday or day before that was old, but also fake.

Can we stick to just recent stuff that isn’t just old (and sometimes fake) street fights?

How did Kirik manage to run this site into the ground?

This garbage was posted years ago. Are we that desperate for content?

Cause they have a bunch of geniuses working for them

Kid’s head got bounced off the road pretty hard…lucky he did not go out.

Kid won that though.

Yeah, I would’ve kneed him in the face as he was getting up.

Little guy aint no bitch like big guy is. Allegedly.

kid could have ended fight but had mercy

kid could have ended fight but had mercy