Dana took the best and left the rest. 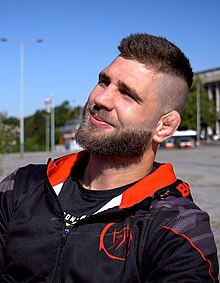 Fedor fought tougher opposition in Pride than the UFC had during his prime, then beat a few UFC champs after they left the UFC.

Never woulda beat Brock Cain JDS DC Mir. And today I mean c’mon it’s not even fair what Stipe Francis and Ciryl would do to him

You can’t argue with that guy about this. In another thread he said during the early and mid 2000’s that UFC was the NFL for fighters and PRIDE was like the AFL. He is just a newer fan that has no idea about what was what in 2000-2006 and for some reason hates Fedor and loves the Diaz bros.

You’re telling me Nate Diaz has a zero % chance of beating Charles Oliveria? Nate has better boxing and at worst is equal to him in BJJ. That’s a fact. Neither of them is submitting the other. But Nate is the better boxer by far.

The closest Nate Diaz ever got to being UFC Lightweight Champion was getting completely manhandled by Benson Henderson for 5 rounds.

That proves you incorrect. B for effort, though.

Mir and JDS? Cmon man. Prime Fedor would be a major problem for all those guys.

Prime vs Prime, Mir’s best chance is getting on top and getting a sub. On bottom, we saw in the second Lesnar fight what happens to Mir’s sub game when punches are being reigned down upon him.

As far as the stand up, Mir has good fundamentals. But he is slow and plodding, which goes right into Fedor’s strengths. Look what he did to Johnson at 45.

JDS would’ve been a good fight. And I’m a Mir fan but I don’t think any version of him beats Fedor.

And just some perspective for the ppl saying Johnson is a can and his wins are unimpressive:

Ivanov is ranked further back than Johnson even after this loss.

Oleinik is 44 and one dimensional.

Blaydes is legit but also a mental case in half of his fights.

Oh and let’s not forget the current UFC champion (Ngannou) has a loss to Derrick.

Heavyweight hasn’t evolved all that much and the title usually changes hands rather often.

Everyone likes to talk about ‘primer Fedor.’

Let’s talk about the Fedor those guys would have fought. The same one who lost to Bigfoot, Werdum and Dan Henderson all in a row.

I don’t even dislike Fedor, you suck boys are just on some bullshit all the time I gotta knock you down a peg.

You go straight to ‘prime Fedor’ just to help your argument. Prime Fedor was in fake fights where his opponent was never planning on winning.

That immediately makes his run much less impressive because now we know what happens when the other fighter doesn’t take a dive: Fedor gets KO’d.

JDS would KO him he was the far far better boxer

Big Nog was never the same after Fedor. Nice try though.

JDS would be battered and submitted. Look what Cain did to him.

Oh hey look everyone it’s the Immortal One with his new account!

Yep no denying it IO, you’re not fooling anybody.

Not gna bother acknowledging your ridiculous perspective; you’re so confused you are hiding behind an alternate account and doing a bad job pretending it’s not you.

Don’t fall for it fellas, you could have a more constructive conversation with a wall than this turd burglar.

Time to disappear for a few days again IO!

Cain would do the same to fedor