Frank Shamrock is "the Greatest of all Time"

Another few points from this one:

1. Tito outweighed Frank by 20 pounds. Back then this was no biggy....but TODAY??? Sheeeeeet. "Eye wood hab to take 12 month to mek dees moob to meedul-wet"-GSP

3. Frank retired from the octogon at 26 years old, on top, as it were. Unheard of today of course.

5. Frank came out with quite the stable of guys, including Maurice Smith and TK. (Tsuyoshi Kosaka)

Shit homeboys I just can't get enough of vintage MMA. Pardon my excitement but I've been watching non stop for 3 days straight.

lol at the buffer comment.  I love these types of threads; I loved the dark ages.

edit:  I remember when it was "progressive" that lion's den added maurice smith to the camp.  Smith was learning grappling and teaching them kick boxing.  Smith is one of the coaches with Shamrock on that bellator show as well.

Hell ya. These dudes lived in relative obscurity compared to the fame and fortune (Unless you are Yves Edwards) that comes with being a fighter.

I sure do hope that one day Dana comes around and puts Frank in the HOF. People say it will never happen, but there have been tons of things which we would never happen. Shall we make another thread for "Things in MMA they said would never happen???"

hellz ya! Who has the GIF of Franks KO SLAM?

Forgot about 2 things. Frank started with the elbow, but followed it with hammerfists to the head ...it was a walk-off tap out to strikes stoppage in a title fight. When Tito beat Guy Mezger he flipped off Guy Mezger's corner which included Ken Shamrock. After beating Tito, Frank also flipped off John Lober who was in Tito's corner.


Hahaha, I see we've got you all worked up over this one! I like to see the old school guys come out of the woodwork talking about the good ole days.


It is only a matter of minutes b4 Sensie Seagal goes on record saying that he taught both Frank AND Tito how to execute a well-timed middle finger. 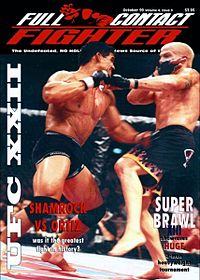 Old school ufcs are the only reason why i still have a vhs player. I remember back in probably 03 or 04 blockbuster by my house sold off all their vhs tapes and i got 23 different ufc events for 1.50 a piece. Some classics like uu 96, and the ken shamrock special. The remake on dvds is ok but theres something special about holding onto a vhs with the semi worn out cover from the early days. Nostalgia

It was definitely a great moment in Shamrock's career and in MMA. Shame it gets swept under the rug by the current ownership. Didn't the UFC have a top 100 important fights list/program and they didn't include this one? I wonder if they included Coleman/Maurice Smith.

The athletes are better today and the skill level has also improved when it comes to the top guys. But regardless of the time period and no matter of what revisionists would like you to believe, there were lots of great moments that much of the current events can't compare to. My favorite years were probably Pride 2002/3 to 2006. It was the perfect time to be a hardcore MMA fan.

It was an important fight for a number of reasons. Among other things it showed how serious cardio work can level the odds. After Shamrock-Ortiz more fighters took cardio seriously, and began to approach it like a science.

I think the craziest bit about Shamrock is that he completely skipped the prime years of his career. Had he fought through those would he be considered better than Anderson Silva? They could have fought in 2006 for the middleweight belt even.

That cover is awesome

I never liked Frank Shamrock (or his brother) and I still don't.. but there is no denying how dangerous he was. No way in hell was he the "greatest ever" but at the time there was a reasonable argument for him being best pound for pound. Though I don't think he was.. Guys like Bustamante would have dominated him. Alan Goes would have beaten him if it wasn't for rope escapes and moon boots.

He was good at everything but wasn't great at any particular So he was always susceptible to being dominated by a specialist.. particularly jiu jitsu (Sinosic, Horn, etc.) His greatest assets were intangibles like scrambling, transitions, explosiveness, conditioning, etc.

Love looking back at all the old stuff, missed a lot of it at the time due to no coverage in the uk, but it just feels more gritty and real.

frank and tito were actually friends before that fight

frank retired to get out of his low money contract

frank latwer showed tito how to become a cardio king

tito said he puked while tapping