Great to be an American

I know that this doesn't have anything to do with MMA but I just wanted to thank our troops for the great sacrifices they have made. Knowing that Saddam was swinging this morning sort of makes things a "little" easier to deal with. Good job guys!!! Come home soon!!

You guys are fucking halarious. It's Alabama dude. I knew that thread was gonna sound bad. Sorry!! The last thing I wanted to do was sound like a fuckin redneck. I'm not even from Alabama. Let me have it. I deserve it. Do you guys think it was a bad thing that Saddam was executed? Or is just bad to fuck it up in a thread? Either way, fuck you guys!! LOL! Can always depend on the UG for some good comedy. Including my post. Now that I read it over again it does sound like some goat roper from Arkansas.

deuce77 has strangulated the correct by hanging it from its neck until dead - good intentions but dumb post.

I get it!!! It's a stupid post. Now post some funny shit to override my stupidity. PRICKS!!!! 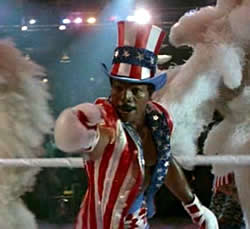 Good intentions, great post. Too bad there are so many haters on here.

Saddam was a ruthless leader that lead with an iron fist in a world full of them. Over the course of his time in power he killed tens of thousands in Iraq, but prevented a civil war and never ruled over the type of insane chaos we see in that country today.

Dubya on the other hand, killed hundreds of thousands. Empowered by a bold faced pack of lies told to his people he pointlessly spilled endless blood just to pad the pockets of a select few war pig partners. He took a country which was relatively timid at the time, with the eyes of the world upon it and tore it limb from limb leaving it in shambles and destroying the lives of so many people.

Whatever Saddam did, Dubya did times ten. Now it is time to understand the caliber of person who pardons himself for war crimes. Understand we have a president that spent many times the funds of all presidents before him just to lie, cheat and murder.

It is now Dubya's time to go on trial.

all is forgiven cajun. i appreciate the sacrifice and valiant efforts of the men and women who serve as well.

I pity all the guys in Iraq. They have no reason to be there. They were all lied to. it's time to send all those boys home to their families and stop fucking Iraq up. Iraq is 10 times worse than when Saddam ruled it and is on the verge of a civil war. All thanks to George W. Bush, the second coming of Hitler.

"Yeah we are really safer now...one terrorist down 2 billion more to go. Wasted war and waste of American lives if you ask me. It is a war we can not win because there is no actual goal to obtain there."

no attacks on usa soil since the war ,3 before the war.
can you put a price on bombs blowing up at the mall when your kids are there,or maybe at your daughters wedding,maybe at the ufc when you are there ?

How you guys doing?

The same as US's illegal war on Iraq?

150'000 civilians killed since US attacked Iraq. How do you justify this when the US's reason was WMD's that were never found.

How do you justify turning a country against itself causing a civil war?

he would not let us inspect his factories to give us peace of mind,(per agreement) if you want to play mind games than get ready to get you ass kicked.ppl can only take so much when you break your word.

i never said iraq was behind the 911 attacks,just that they stopped.think what you want

You were right. It got bad. Sorry to everyone for starting this thread.

"please outline which resolutions were broken...this should be classic..."

It's the same concept, idiot. They went in without UN backing.

"not our fault or problem...sunnis killing shiia, shiia killing sunni and somehow we are responsible? And as for WMDs, their absence doesn't prove or mean anything. firstly he HAD them at one point and secondly, he wouldn't allow inspectors in, which was a condition of the cease fire, hence the resumption of hostilities...what aspect do you not understand?"

Yes, you are. The increase in death rate has multiplied beyond all count since the US invaded Iraq. The US has killed countless civilians.

There were inspectors in the US for 3 months before the US invaded Iraq, they were pulled out 2 days beforehand for their own safety.

Hans Blix is on quote saying "In the Middle Ages when people were convinced there were witches they certainly found them." And he's damn fucking right. Except, people can be accused of being witches, but nothingness cannot be accused of being a WMD.

They never found any weapons. george Bush is going on quote for stating that iraq had links with AQ's 9/11 attack but never showing one shred of evidence to suggest otherwise.

There is no fucking dispute that Saddam was a bad bad man, and that he was not fit to rule a country. If the Us went into Iraq with UN's approval with intention of ridding Saddam, and stating that publically then I would back it. But that's far from the case.

They lied about weapons of mass destruction. george Bush is on record saying "But for those who say we haven't found the banned manufacturing devices or banned weapons, they're wrong. We found them."

He didn't find diddly fucking squat. And if WMD's was the US's main prerogative for invading Iraq, who didn't actually have WMD's - Then why the fuck is the US not invading North Korea right now who is clearly hostile and has already stated publicly that they have WMD's and have publicly tested weapons?

And what about the dozens of other countries which are far more of a threat than Iraq ever was.

The US attacked Iraq more than once - Iraq never attacked the US. Theres one for you. Dipshit.