You can stream the fight in the U.S. by going to the Showtime app, starting at 9 p.m. ET. 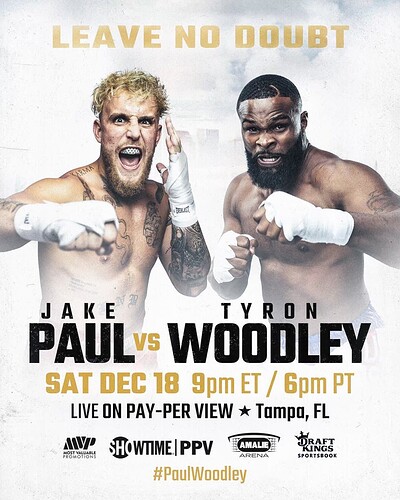 TAMPA, Florida – YouTube sensation-turned-boxer Jake Paul is back in the ring to face Tyron Woodleyin a rematch after Paul’s split decision victory over the former UFC champion in August. The eight-round cruiserweight bout headlines a seven-fight boxing card at Amalie Arena in Tampa, Florida, on Saturday (Showtime PPV, 9 p.m. ET).Paul (4-0, 3 KOs), 24, of Cleveland, was scheduled to face heavyweight champ Tyson Fury’s half brother, Tommy Fury. But Fury was forced to withdraw from the fight due to injury, and Woodley took his spot as a late replacement.

Chris Avila didn’t like the judges’ decision when he fought Anthony Taylor last year in Bellator MMA. This time, the scores went his way in boxing.

Avila beat Taylor via majority decision (78-74, 77-75, 76-76), outlasting Taylor with more output in the later part of an eight-round grudge match. Avila is affiliated with Nate Diaz’s team and Taylor is a sparring partner of Jake Paul, as well as a training partner of Bellator featherweight champion AJ McKee, who was in Taylor’s corner.

Taylor went to the body early and had success with hard combinations. But midway through the fight, Taylor started to run out of steam and Avila started coming on – in typical Team Diaz fashion. In the fifth round, Avila landed some nifty combos and also went to the body. He hurt Taylor with a left hook off the break. There was more of that in the sixth and seventh.

Avila had his best round in the eighth, wobbling Taylor with a right hand and following with a flurry. Taylor was able to survive to the end of the round and fight.

Avila (1-1), a UFC veteran, picked up his first pro boxing victory. The 28-year-old from Stockton, California is 8-9 in MMA and on a two-fight winning streak. Taylor (2-3) has dropped two straight in boxing. He fell to Tommy Fury on the first Jake Paul vs. Tyron Woodley card Aug. 29 via unanimous decision. Taylor, a 32-year-old Los Angeles resident, is 7-5 in MMA.

J’Leon Love raised his hands before the scores were even announced because he knew. Throughout his eight-round cruiserweight fight against Marcus Oliveira, Love brought the pressure and landed combination after combination, leading to a 77-75, 79-73, 78-74 unanimous decision victory.

Love (24-3-1, 13 KO), of Inkster, Michigan, had Oliveira (28-6-1, 22 KO) against the ropes and, it appeared, close to dropping him in the fifth round. Oliveira survived but from that point on likely needed a KO to win the fight – a stoppage he never came close to getting.

The bout, Love’s first in over two years, stopped a two-fight losing streak. It also snapped an otherwise successful 2021 for Oliveira, who won both of his previous matches in 2021. Prior to this year, Oliveira hadn’t won a fight since 2015. – Rothstein .

Jeovanny Estela moved better from the opening bell and for four rounds, and he continuously put a small barrage on Chris Rollins. So, it was no surprise Estela won a unanimous decision in the four-round junior middleweight bout that was the opener to the card.

Estela, from Orlando, Florida, appeared to be on the verge of knocking down Rollins (5-3-1, 4 KO), from Charlottesville, Virginia, multiple times during the fight. But Rollins – the more experienced fighter – held on in each round. But it was clear from the jump that Estela (6-0, 2 KO) was the stronger fighter.

It was, throughout, a very close fight. Liam Paro and Yomar Alamo often moved all throughout the ring, attacking each other, being crafty and smart with their decisions to attack. And it showed in a very close 10-round junior welterweight fight that Paro won by split decision 95-94, 94-95, 96-93.

Paro (22-0, 13 KO) rallied from a rough first round. An early knockdown by Alamo (20-1-1, 12 KO) off a nice left hook-straight right combination capped a strong first round from the fighter from Puerto Rico; but it also might have settled Paro, the Australian boxer making his United States debut.

Paro became the more aggressive fighter over the next handful of rounds, perhaps setting him up for the rest of the match. Alamo appeared to be stronger in the final two rounds – but it was not enough in a tight fight.

Paro landed 19% of his total punches and 38% of his power punches, according to CopuBox, to cap off an undefeated three-fight year. 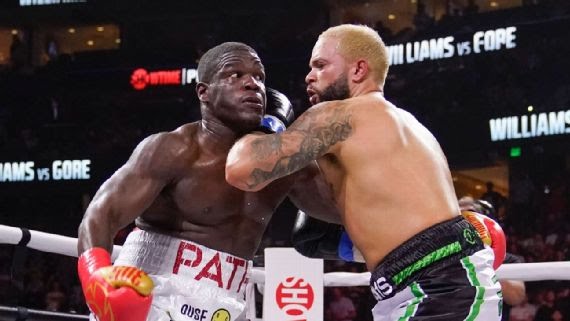 The boxing match between former NBA All Star guard Deron Williams and star NFL running back Frank Gore was switched Friday to an exhibition inexplicably by the Florida State Boxing Commission.

Make no mistake, though: It was a legitimate – and entertaining – fight.

Williams defeated Gore via split decision (38-37, 37-38, 40-35). On Thursday at the prefight news conference, Williams said NBA players have the stigma of being soft. He disproved that against Gore with a gritty performance.

The bout was contested at 215 pounds over four rounds with 12-ounce gloves. The commission ruled it an exhibition on Friday when it was originally scheduled to be a pro fight. The bout will not go on either man’s pro boxing record.

Postfight reaction: Frank Gore had the crowd from the beginning – massive cheers when he walked into the arena, when he walked to the ring and when he was introduced to the crowd – and in boxing, sometimes, that’s a large part of the battle in a fight like this.

And Gore, one of the best running backs in NFL history, looked for a little while like he could fight. But then, it seemed, the tiredness came for both him and his heavyweight opponent, former NBA All-Star Deron Williams, in a four-round exhibition that Williams won by split decision.

In the middle of the second round, Williams pushed Gore into the ropes, forcing the referee to stop the action. Seconds (in fight time) later, Gore did the same to Williams. It was that type of fight, one between two guys who didn’t seem particularly skilled in boxing but wanted to, well, fight.

Give them credit. It was entertaining. Gore and Williams threw big punches. And it’s hard to jump in a boxing ring. Both Gore and Williams did better than for NBAer Nate Robinson – the bar, of course, was very low – but the heavier gloves might (12 oz) have helped. There were actual punches connected – more than could be said for Robinson when he barely fought Jake Paul.

But there’s a reality about this, too. This was intriguing as a one-off fight. It was different and oddly compelling. The first round, at least, had some interest as an actual boxing match. By the third round, it felt somewhat more like a clinch-fest with some wild punches thrown in. Which is why this was a heavyweight fight not worth putting on again.

It was enjoyable for a couple of rounds. After that, it looked like two guys heading toward middle age – Williams is 37, Gore 38 – who did something fun one time and probably doesn’t need to happen many more times again. – Rothstein .

Amanda Serrano accomplished what she needed to Saturday night. She took care of her last opponent of 2021 – possibly her last opponent before a potential megafight against lightweight undisputed champion Katie Taylor – to set up much of what she hopes to come.

In a 100-90, 99-91, 99-90 unanimous decision win over Miriam Gutierrez at lightweight, she sent a clear message she remains one of the best fighters in the world.

Serrano moved up in weight for the fight, hiring a nutritionist for the first time and continually enjoying chocolate milkshakes – and enduring eating carrots, among her less favorite foods – to prep for the fight. She also sparred with fighters who weighed far more than the 135 pounds she was fighting at – 150-and-160-pounders – in an attempt to prepare for Gutierrez.

Postfight reaction: It’s all close-to-clear now. Before the fight, Amanda Serrano knew Katie Taylor had handled her part. All she needed to do was take care of Miriam Gutierrez and she would be able to start really looking more at hers.

And after a dominant unanimous decision win over Gutierrez, Serrano can now solely focus on the possibility of facing Taylor in a fight that could be considered the best fight in women’s boxing history, a game-changing, history-making fight.

Both fighters have said they want to face each other. Jake Paul, one of Serrano’s promoters, said he is seeking a seven-figure payday – something Taylor also indicated to ESPN. And it might happen at the Mecca of boxing, Madison Square Garden.

Against Gutierrez, Serrano showed she might be the most devastating fighter in women’s boxing, a machine who has no off button, who continually delivers punch after punch, combination after combination.

She’s never faced a fighter quite like Taylor, but in 2022 – thanks to a dominant performance Saturday and a crowd inside the arena that cheered her literal ever move – the boxing world may just find out. – Rothstein .

I think they said Anthony Taylor vs. Chris Avila won’t be televised?? Chris Avila is Nate Diaz training partner and the only reason Diaz is there. I hope they televise it!

Originally wasn’t going to watch this fight but for some reason it’s become more intriguing as we get closer to it.

I would of favoured a full camp Woodley because of his experience. However due to the short notice it’s a 50/50 fight for me.

Jake Paul by TKO this time. 3rd round.

It’s amazing the opportunities he gets just for being aligned with the Diaz bros. I don’t think I’ve ever seen him win a fight, or even look good in one.

Wow its already happening, how long has this been planned? Not much build up.

Wasn’t Nate saying Conor should be fighting Avila and not him before their first fight? He’s listed at 8-9 and only has 1 win against somebody with a winning record and that guy was 4-2.

Wasn’t Nate saying Conor should be fighting Avila and not him before their first fight? He’s listed at 8-9 and only has 1 win against somebody with a winning record and that guy was 4-2.

So he has a similar record to the Diaz bros.

I’m coming around on Jake. Guy is backing up his talk and giving Uncle Dana the business for paying fighters a fraction of a cent on the dollar…

Not a Jake Paul fan myself, but it was cool for him to give Woodley a quick rematch when he really seemed ready to move onto other things, and I doubt this match even garners the same attention as the first. I’m kinda rooting for him this time around. Whatever Woodley is going to do different in this match he should have done in the first. I hope Paul still has his head in this one. 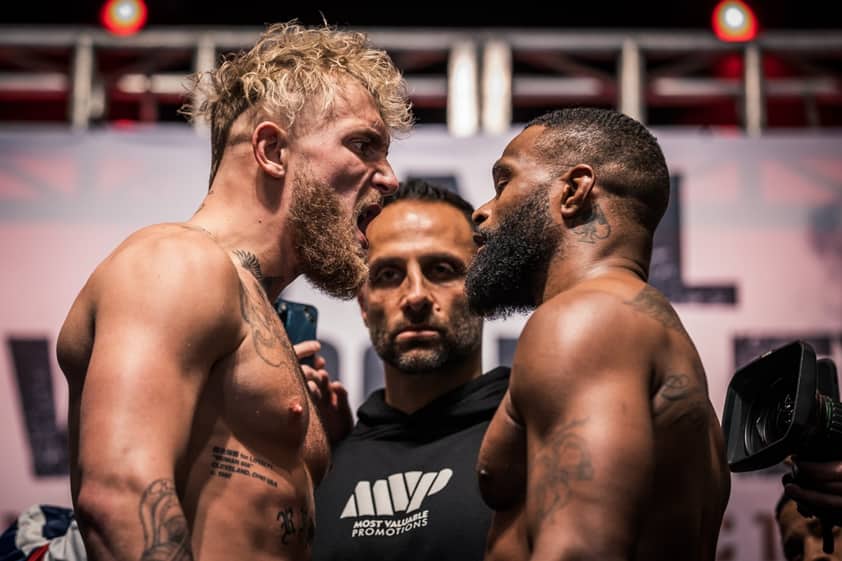 Keep it locked to this space for Paul vs Woodley 2 results throughout the night.

No interest in this one. I’ll watch the highlights.

Can’t stand to watch another one of these ghetto ass PPVs with the trashy commentary and bullshit music in between fights.

This is on Showtime, the best production in boxing. Though they might add some goofy stuff since it is a Paul fight. 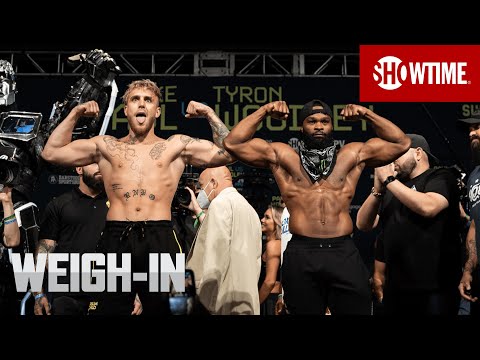 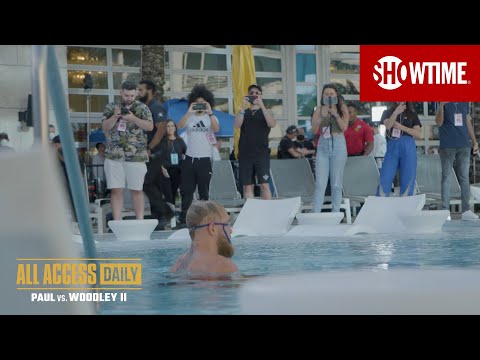 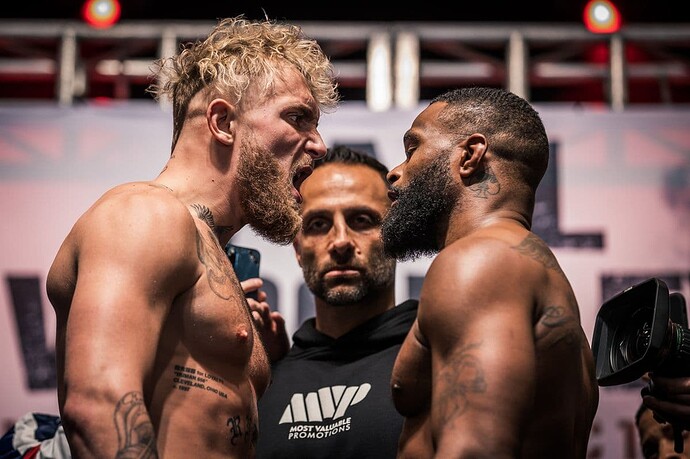 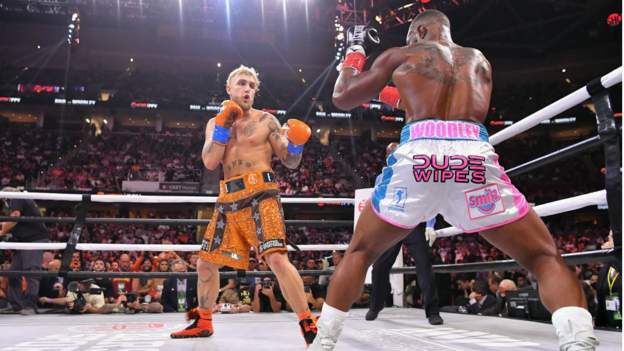 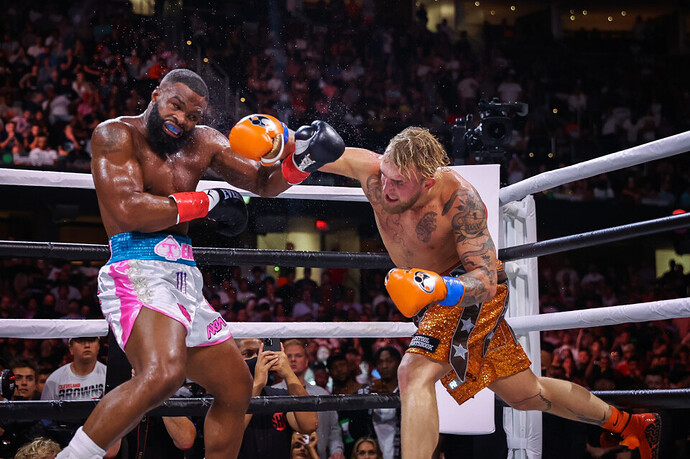 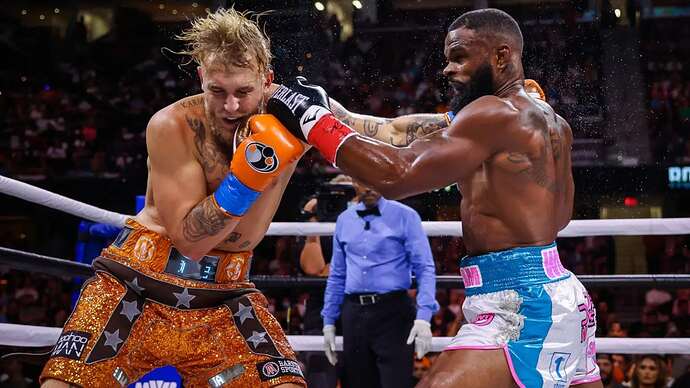